They plan to vote on a strike for better wages. 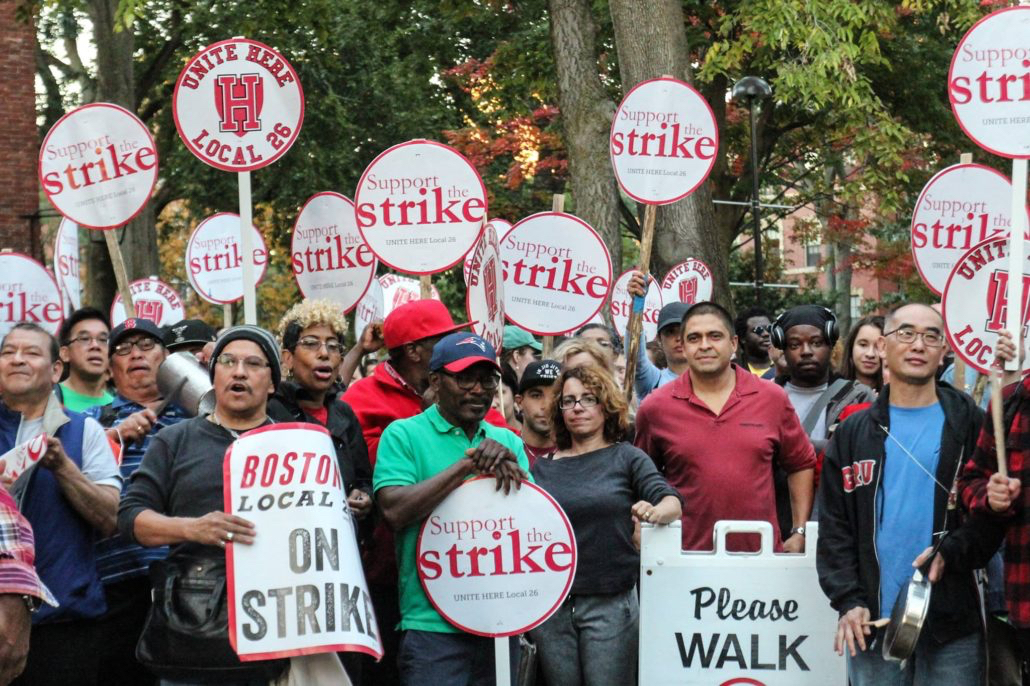 Update, Thursday, October 5: As expected, nearly all of Northeastern’s unionized dining workers have voted to authorize a strike, which will take effect on October 11 if the demands of the dining staff for a better wage and health coverage are not met. Boston’s City Council Wednesday also voted unanimously to support a resolution backing the workers, and Unite Here Local 26 says its members now have the support of “more than 40 student groups.”

Food service workers at Northeastern are voting to authorize a strike. Sign on in support: https://t.co/P8agnLBC1Q #SupportTheStrike pic.twitter.com/jgLSOGlWga

Unionized dining hall employees will announce Wednesday at 5 p.m. their intent to vote on a strike early next month. An overwhelming majority of the workers have already pledged to vote in favor of it, union spokeswoman Tiffany Ten Eyck says. If they move forward with that plan, it would be the first-ever open-ended strike of dining room staff at the college, who are employed by a food services company called Chartwells.

“It’s unfortunate that it’s come to this point,” says Brian Lang, president of the Unite Here Local 26, which represents workers at Northeastern, Harvard, and 11 other college campuses in the Boston area. “Here we have one of the most prestigious institutions in the city of Boston, Northeastern University, an institution that claims to pride itself in its relations with the community around it—which is where most of the dining hall workers live—and they are all working for this institution and relying on welfare while working full-time jobs.”

Specifically, the employees want health benefits and a $35,000 wage, which is the median pay in Boston as defined by the then-Boston Redevelopment Authority last year. The average dining employee at the university made $22,000 last year, the union says. Negotiations have been ongoing since April.

Northeastern emphasizes that it does not technically employ the food services staff, although it considers them “valued members of our community,” the university says in a statement. “We look forward to the union and the employer reaching an amicable agreement.”

But the union is calling on Northeastern to do more. “We believe that if the will is there,” Eyk says, “the Northeastern administration should step up and help these workers to get what they need and what they deserve.”

A vote on whether to strike could take place as soon as October 4, Lang says, adding that, ideally, the union and food service vendor will come to an agreement on the demands, which he called “modest,” before a strike is necessary.

A pay bump is only fair, Lang says. He highlights the role the workers play in the lives of students and faculty, which he says goes beyond just cooking and serving food. And he also points to the campus’ development over the past decade—it is, for example, building an 800-bed residence hall for undergraduates—and says the workers want to grow, too. “I’m hoping they are able to see that for a really relatively small amount of money they can actually be setting an example in Boston in terms of being a really good community partner, create good will, create stable jobs in the community, and continue to thrive and grow in the positive ways that Northeastern has.”

Food service workers at Harvard last year fought for, and won, a $35,000 wage after a 22-day strike last year, the first on campus since 1983. In July, nurses at Tufts Medical Center held the city’s first nursing strike in 30 years.

The union says it’s gotten support from students at the university, where tuition and fees cost about $45,000 and which has an endowment of about $700 million. A number of them attended a meeting with the employees, video of which was shared by the union’s Twitter account. “We can’t do this without y’all,” dining hall worker Shante McCorvey, a mother of three who says she shares a two-bedroom apartment with her children, says in the video. “We will not do this without you guys.”

A rally and briefing will be held at 5 p.m. Wednesday on the third floor of Northeastern’s Curry Student Center.

This story has been updated to reflect that union officials are negotiating a contract with a food service provider, not directly with Northeastern University.