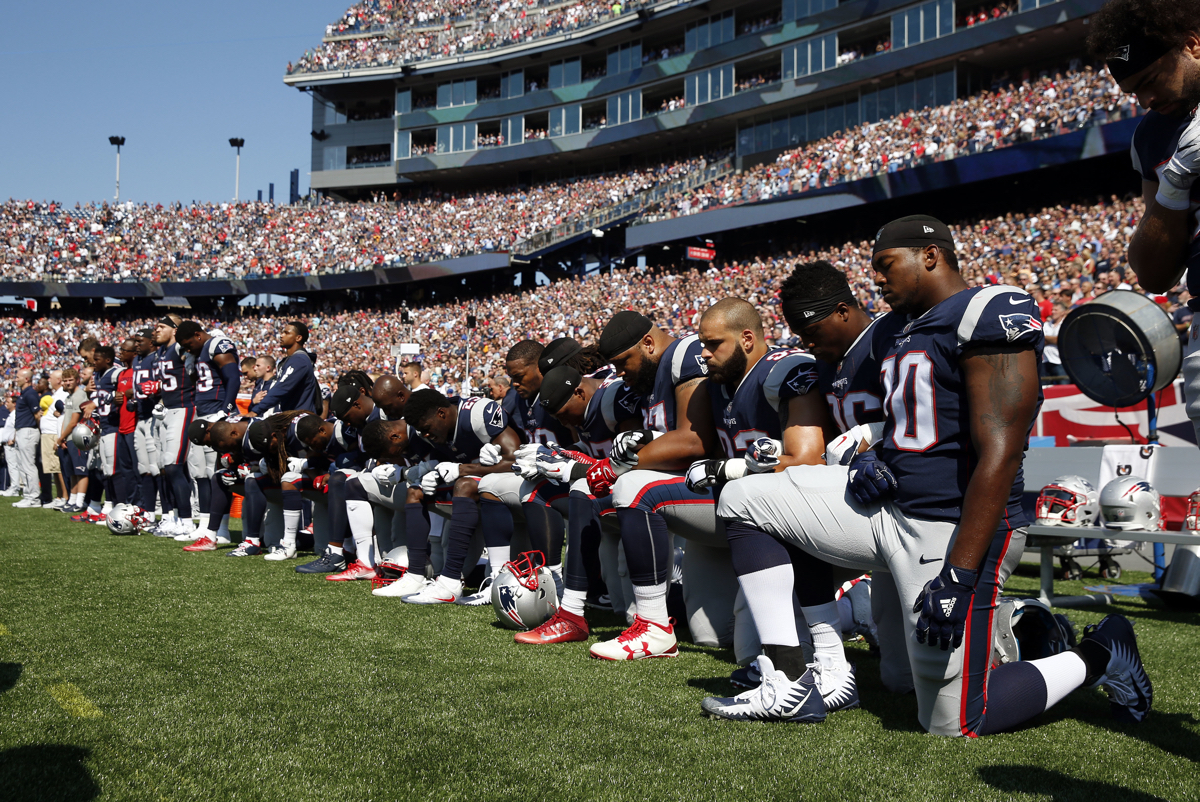 The morning after his teammates on the Patriots took a knee before their game at Gillette Stadium, Tom Brady has weighed in on the Trump-fueled controversy, calling the president’s comments about National Anthem protests by black football players “divisive.”

Brady, who has long considered Trump a personal friend and who endorsed him as a candidate last year, has sought to avoid answering questions about the Republican and has avoided getting involved in politics. But with players and team-owners across the league offering statements about a tense weekend, this time he was forced to respond.

“Yeah, I certainly disagree with what he said. I thought it was just divisive,” Brady said during an appearance on WEEI Monday morning. “Like I said, I just want to support my teammates. I am never one to say, ‘Oh, that is wrong. That is right.’ I do believe in what I believe in. I believe in bringing people together and respect and love and trust. Those are the values that my parents instilled in me.”

Brady did not kneel during the anthem, as did about 20 other players on the team, but he locked arms with teammates while he stood. He tells WEEI that was meant to be a sign of unity with his teammates.

“Everyone deals with different challenges in their life and you respect everyone’s opinions and views. You don’t have to agree with everything,” he continued, adding, “I think everyone has the right to do whatever they want to do. If you don’t agree, that is fine. You can voice your disagreement, I think that is great. It’s part of our democracy. As long as it is done in a peaceful, respectful way, that is what our country has been all about.”

Brady offered some similar, and similarly vague, commentary when he posted an ode to “brotherhood” on Instagram that said and left a comment on an Instagram post from Aaron Rodgers with an emoji of a flexing bicep.

All this comes after Trump, in an ambling speech in Alabama, said he thought owners of football teams should fire players who kneel during the singing of the National Anthem in protest of racial injustice. “Wouldn’t you love to see one of these NFL owners, when somebody disrespects our flag, to say, ‘Get that son of a bitch off the field right now?'” he said. He also said he thought that protections designed to keep players safe from brain injury had made the game  too safe, and that referees should be more lenient about violent tackles. He said those two things had sunk the NFL’s ratings, and called on his supporters to boycott games until the protests stop.

His fiery remarks—which came after a separate tirade about Golden State Warriors’ Stephen Curry, who said he wouldn’t visit the White House with his champion team—prompted a response from even Patriots owner Bob Kraft, who has lavished support on Trump and is also a close friend. Kraft, like Brady, also used the word “divisive” to describe Trump’s statements and said he was “deeply disappointed by the tone of the comments made by the president.”

Trump, asked about Kraft’s comments, said Monday that he wants the billionaire to “do what he wants to do,” according to a transcript of a scrum with reporters.

I like Bob very much, were friends — he gave me a Super Bowl ring a month ago, right? — so he’s a good friend of mine, .and I want him to do what he wants to do, but we have a great country, we have great people representing our country, especially our soldiers, our first responders, and they should be treated with respect, and when you get on your knee and you don’t respect the American flag or the anthem, that’s not being treated with respect.