UPDATE: “Fester” the Corpse Flower Will Not Bloom after All

Zoo officials say it has withered away. 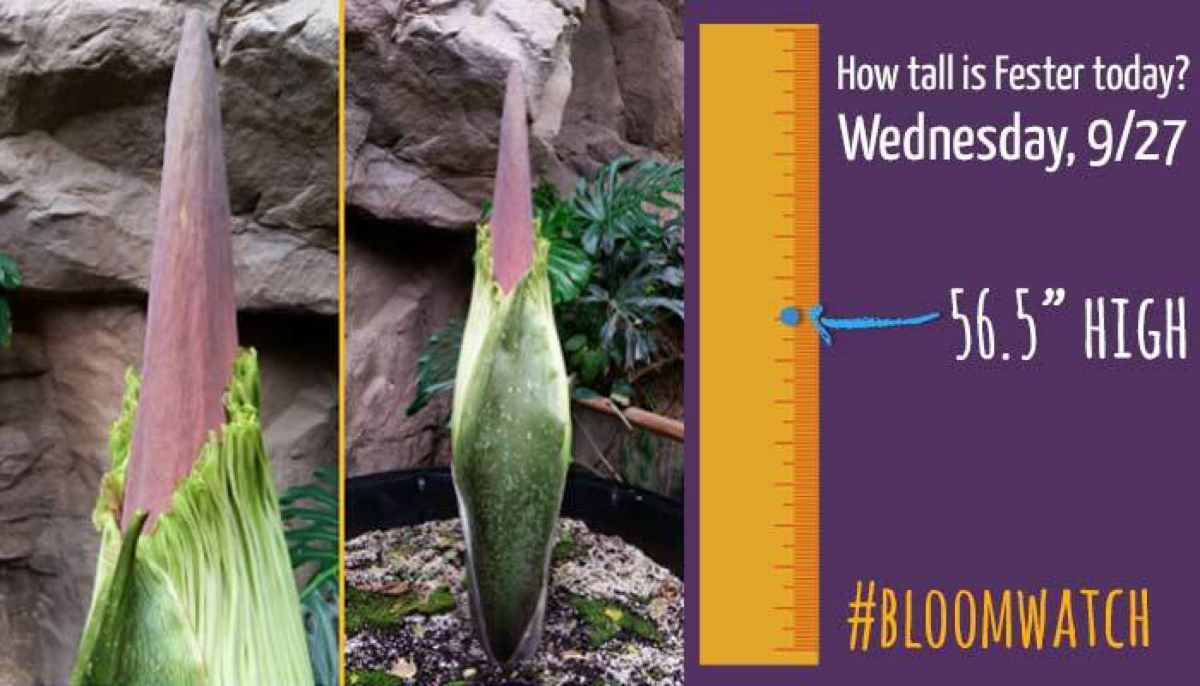 Photo via the Franklin Park Zoo

Update, Friday, October 17: Unfortunately, it appears that #Bloomwatch has ended without its eponymous bloom. Officials at Boston’s Franklin Park Zoo say “Fester,” its rare “corpse flower” that had been poised to open and release its notoriously smelly stench, has withered. The flower will now be taken into the zoo’s greenhouse, where it will sit for what could be several years before its next shot at blooming.

“Fester kept us in suspense over the past few weeks and though it seemed like a full bloom was on its way, it is a very rare event and we can never say with 100% certainty that it will happen,” the zoo says in a statement. “We did have a lot of fun watching this titan of the plant world grow so quickly, and hope you enjoyed following along.”

Until next time, you weird pungent superstar.

Update, Thursday, October 5: Franklin Park Zoo officials say Fester the “corpse flower” could bloom at any moment, and are extending their hours in anticipation of the big reveal. The rare flower, which smells like rotten flesh when it blooms once every several years, has so far soared to a height of more than 74 inches. The zoo has announced it will stay open until 9 p.m. on Thursday and Friday. Experts caution that it’s difficult to say for sure when, exactly, a “corpse flower” will bloom, but all signs point to soon. Only the “Tropical Forest” section of the zoo will remain open past the normal closing time for the special event. Tickets are $5. “Animals will not be on exhibit,” Zoo New England says, “although visitors might catch a glimpse of the African straw-colored fruit bats flying overhead.”

Earlier: #Bloomwatch is back! Another highly rare and extremely smelly “corpse flower” named “Fester” is about to bloom at Boston’s Franklin Park Zoo, and those curious about seeing, and smelling, the notorious flower in action are getting amped.

One of its Amorphophallus titanum flowers is expected to open and release its stench to the world sometime in the next 7-10 days, the zoo’s experts say, although they caution they “cannot predict the bloom date with absolute certainty.” When it does, it only remains open for one to two days, releasing an odor designed to attract insects that has been likened to the reek of rotting flesh. In addition to the smell, it will also heat up to about 98 degrees Fahrenheit and will brandish a meaty burgundy color, according to LiveScience. It will hold its corpse-mimicking  pose for up to 36 hours before collapsing in a flowery heap. “Corpse flower blooms are a unique and rare experience,” the zoo says.

The flowers, native to Sumatra in Indonesia, only open once every several years, and some go decades between blooms. They’re also huge. The biggest one ever recorded, in New Hampshire, stood more than 10 feet tall.

So now we play the #Bloomwatch waiting game. Observers can track “Fester’s” rapid growth on Twitter, Facebook, Instagram, or Snapchat. As of Wednesday, according to the latest update, “Fester” is standing 56.5 inches tall—up five inches from the day before.

The zoo has seven “corpse flowers,” all of which are named after characters from The Addams Family. One of them, named “Pugsley,” bloomed last October. “Fester” has opened up twice already while in the Dorchester zoo’s possession, in 2012 and 2014.

#BloomWatch 2017 has begun for #CorpseFlower, Fester at #FPZoo! The plant can be seen next to the pygmy hippo exhibit inside the Tropical Forest. We can’t say with absolute certainty when the bloom will occur, but we are estimating about 7 – 10 days, based on Fester’s previous growth chart. Corpse flower blooms are a unique and rare experience – these exotic flowers will often go many years between blooms, which last for only 24 – 48 hours! For more information, visit www.zoonewengland.org/bloomwatch2017