"America is as much our country, as it is yours." 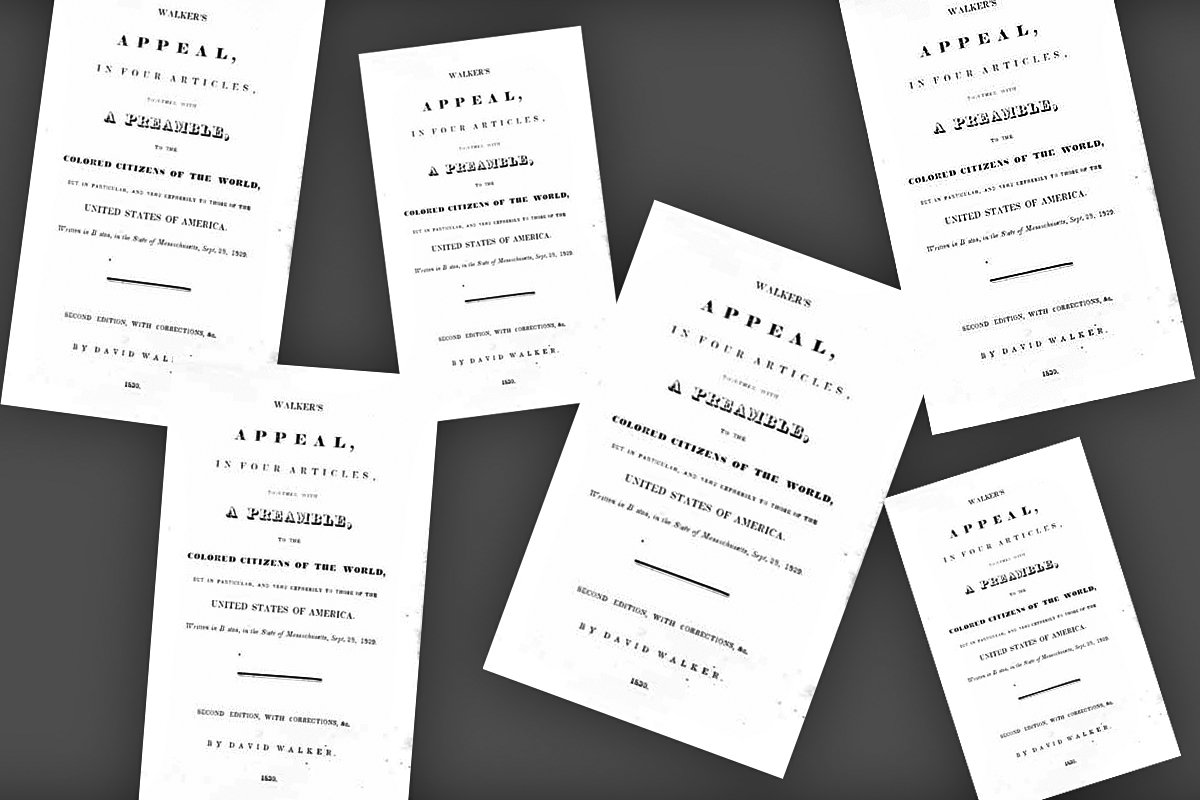 “They want us for their slaves, and think nothing of murdering us,” wrote abolitionist David Walker in 1829, adding with inciting passion, “It is no more harm for you to kill a man who is trying to kill you, than it is for you to take a drink of water when thirsty.”

Born to an enslaved father and a free mother in North Carolina, Walker grew up witnessing the atrocities of slavery. He was free due to his mother’s status, which allowed him to get an education—and to witness others’ suffering under the hands of white slaveowners. His experiences would lead him to one day write a radical anti-slavery appeal to his “afflicted and slumbering brethren,” calling for the immediate eradication of slavery and equal rights for black people.

In the 1820s, Walker moved to Boston and set up a used clothing shop. While he was no longer surrounded by slavery, Walker still felt the oppression of his race in the North. Black people were not allowed to serve on juries, and their children attended different schools. To oppose this discrimination, Walker joined the Massachusetts General Colored Association and began writing for Freedom’s Journal, the country’s first African-American newspaper. He soon became a prominent anti-slavery figure in Boston.

On September 28, 1829, Walker published a document that would define his legacy and change the course of the anti-slavery debate. Walker’s Appeal has been remembered as the first assault on slavery to come from the pen of a black man, rallying those who had long fought for freedom.

The document’s full title — Walker’s Appeal, in Four Articles; Together with a Preamble, to the Coloured Citizens of the World, but in Particular, and Very Expressly, to Those of the United States of America, Written in Boston, State of Massachusetts, September 28, 1829 — speaks to Walker’s thoroughness in his argument against slavery. In more than 70 pages, referencing both the Bible and the Declaration of Independence, Walker criticized white, slave-owning Christians for their hypocrisy, called for the immediate abolition of slavery, and argued for the instatement of equal rights for black people.

Walker also criticized Thomas Jefferson, the former president who said black people “must be removed beyond the reach of mixture.” He wrote clearly about the injustice of colonization, a popular movement that would move free black people out of America and into an African colony. Walker believed African Americans had a right to live in the United States, having been part of the foundation that built it. “America is more our country than it is the whites’,” Walker argued, “we have enriched it with our blood and tears.”

Walker’s Appeal acted as a rallying point for black people, calling for action and at times even justifying the use of violence. Its widespread publication sparked a string of editorials, including some by white abolitionist William Lloyd Garrison, owner of weekly Boston newspaper The Liberator. Although Garrison agreed with some of Walker’s words, he expressed that “a good end does not justify wicked means.” Other papers marked the enthusiasm of the black community. The Boston Evening Transcript wrote about how black people gloried “in its principles as if it were a star in the east, guiding them to freedom and emancipation.”

While Walker did write passionately to the black population, he also addressed white readers with the idea of amity. “American is as much our country, as it is yours,” he wrote. “Treat us like men, and there is no danger but we will all live in peace and happiness.”

Still, the racist white community feared the possible ramifications of Walker’s Appeal. In North Carolina, black people were killed or arrested for reading it. Louisiana made it a capital offense to “write, print, publish, or distribute any thing having a tendency to create discontent among the free coloured population of this state, or insubordination among the slaves therein.” Georgia quarantined all visiting black sailors while their ships were in port, hoping to stop the circulation of Walker’s Appeal. The governor even promised a $10,000 reward for Walker’s capture.

Still, the document had an impact. Hundreds, if not thousands, of slaves were exposed to Walker’s ideas. Traveling preachers, sailors, laborers, and others sympathetic to the cause helped Walker distribute copies of the Appeal to the South alongside his use of the regular mail system. These people were also the ones who secretly found ways to read Walker’s Appeal out loud to illiterate slaves.

A more covert way of spreading the Appeal was through Walker’s own clothing business. He sewed copies of the document into the lining of sailor’s clothing, and when the sailors reached the South, they removed and distributed the pamphlets.

The ideas spread, and so did the desire for Walker’s words to come true. A friend of Walker’s claimed that the Appeal inspired a North Carolina slave uprising in December of 1830, where sixty black people were killed. In New Orleans, a string of suspicious fires sprung up, and a rebellion north of the city was struck down, fifteen of its leaders executed.

Walker published two more editions of his Appeal, the final in June of 1830. In August, he was found dead in his home in Boston. While there were rumors of poison, later research suggests he died of tuberculosis, the same illness that took his daughter. Nearly two hundred years later, his words are still remembered.

“Walker’s Appeal is the first sustained written assault upon slavery and racism to come from a black man in the United States,” wrote historian Herbert Aptheker. “And Walker does this not as one who hates the country but rather as one who hates the institutions which disfigure it and make it a hissing in the world.”