Gloria Steinem Was Honored at the Shining Star Gala in Boston

The Victim Rights Law Center gave her the Leadership Award. 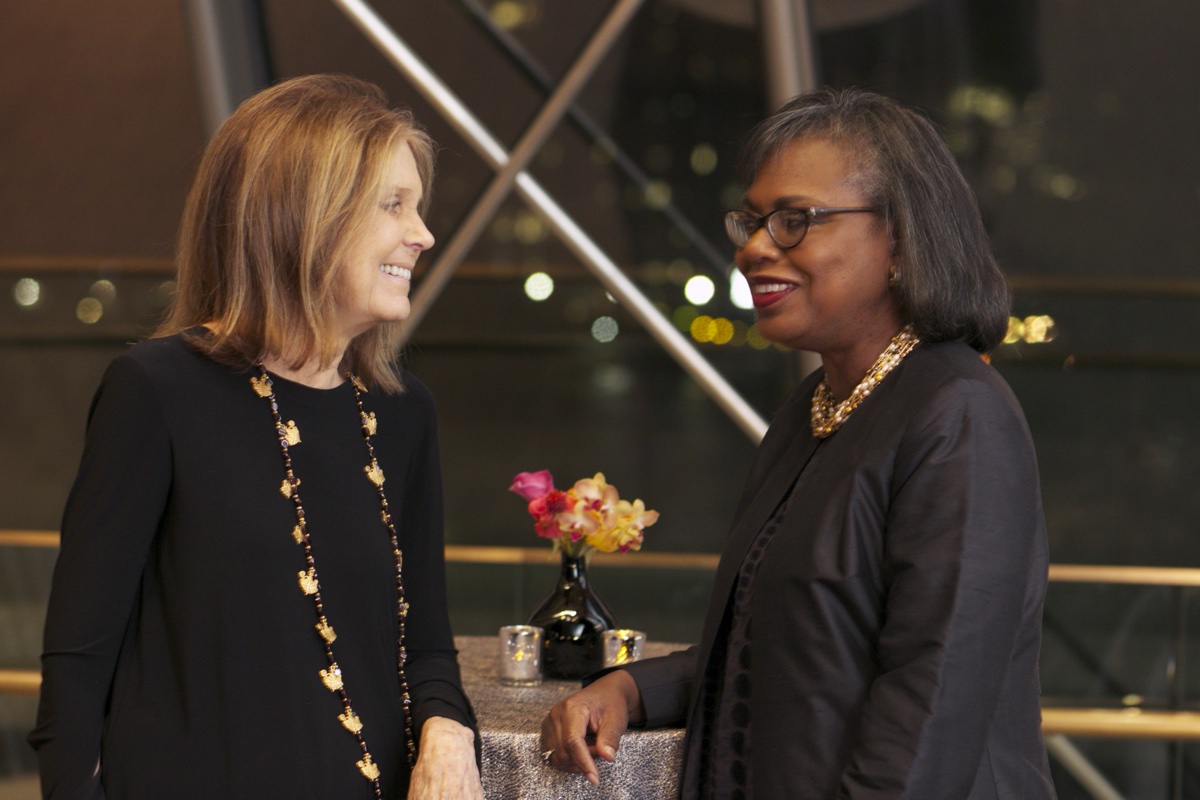 Photo of Gloria Steinem and Anita Hill by Cheryl Richards

There was no black tie prerequisite, no exorbitant tables costs, and no after-dinner dance party. But what last night’s Shining Star Gala at the John Joseph Moakley Courthouse did have was Gloria Steinem, Anita Hill, Ayanna Pressley, and more than 500 guests who passionately support the Victim Rights Law Center.

The center, founded by lawyer Susan Vickers in 2000, is the first nonprofit law center in the country exclusively devoted to providing pro bono legal representation to victims of rape and sexual assault. And although glitzy production costs were low (it’s rumored that Steinem paid for her own flight and stayed with a friend) heartfelt speeches from Pressley, Shining Star awardee attorney Michael Harriman, and a VRLC client who was the recipient of the Courage Award raised emotions, as well as funding. Although the money has yet to be tallied, an educated guess would put the total raised in the hundreds of thousands.

Before Steinem took the stage for her own inspiring speech, she sat down for a quick conversation about the unfortunate role sexism still plays in women’s lives, and what we can do about it.

The workforce has improved for women, but sexism still very much exists. Do you encounter it? And if so, how do you handle it?

Fortunately, I have always been a freelancer. I’ve never actually had a job, so I can’t be fired. [laughs] It makes it easier for me to at least name what’s going on. I have great empathy for women and men, but especially women, who are in a hierarchical structure because it makes it more difficult. But I do believe that it’s very important that we name the problems when they happen, because people can’t learn unless we’re honest. Certainly if I made a mistake that was diminishing to someone else, or insulting to someone else, I would want that person to tell me, right? So my first and best advice is to name it.

But often as a woman, naming the problem earns you the reputation of being sensitive or difficult.

If someone only has a couple of hours a week to dedicate to activism, what are the best ways to focus their energy right now?

There are obvious things that all of us must do: Consider the impact of how we spend our dollars, how we vote, and of course, that we vote. We still have a very low voter turnout rate in this country. After that, I think each of us as individuals have ways that we can be effective that are unique to us. You have people who trust you. We need to use the areas of trust and expertise that we already have. So I would say that the important thing is not to say, “What should I do?” but to say, “I’m going do whatever I can.”

You have such grace about you. How do you maintain that when so many people want a piece of you?

First of all, I mean, we don’t have self-vision really…but I get to do work that I love with people that I care about. I frequently don’t see the division, nor do I feel the division between work and play. My colleagues are my friends. I feel really lucky. I never could’ve imagined that life would be this satisfying—angering yes, but also satisfying.

You’ve had quite a lot of experience working at magazines, first as a columnist for New York Magazine and then as a founder of Ms. Magazine. How did you like that work?

My idea of heaven is an editorial meeting. I love sitting around and thinking of titles and blurbs and pitching article ideas. It’s not unlike a movement even, because you’re sitting there, trying to think, OK, there’s this problem, what do we do about it?