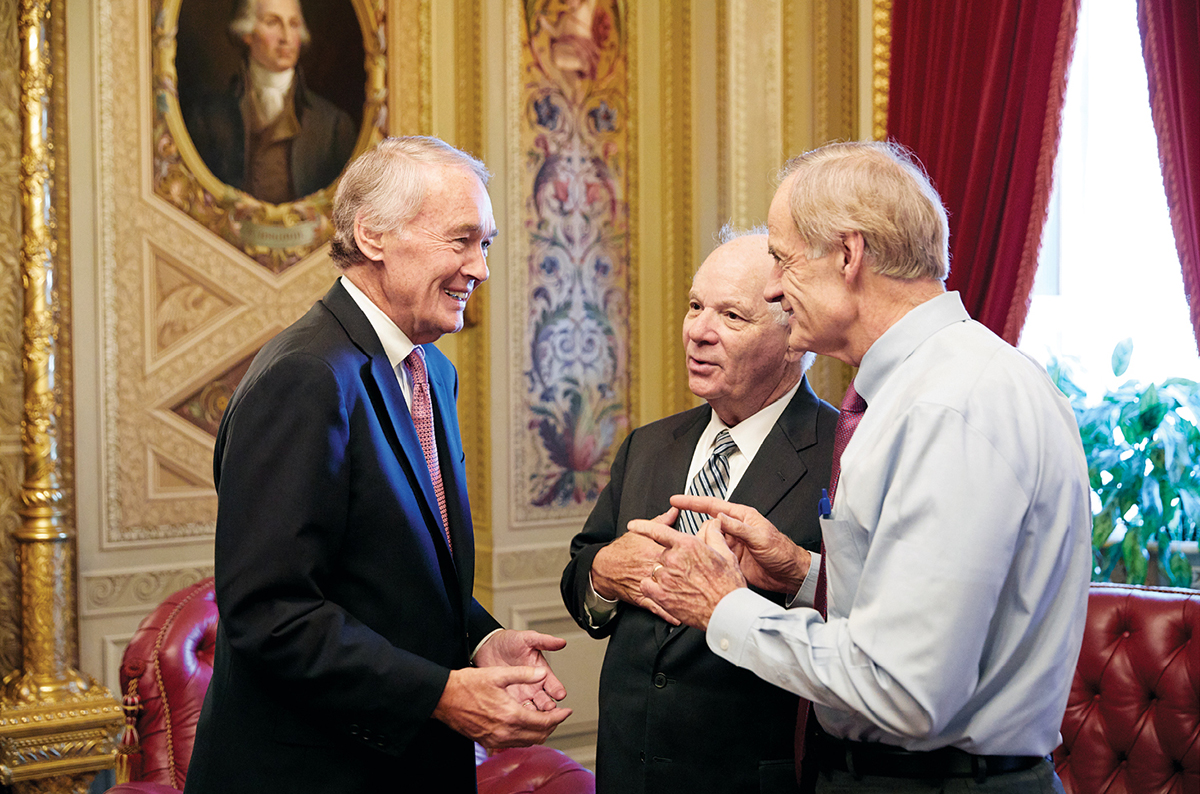 Ed Markey doing what he does best: wheeling and dealing with Democratic Senators Ben Cardin and Tom Carper in the U.S. Capitol. / Photograph by Chris Buck

The most damaging gaffes, political wise men say, are the ones that confirm what we already believe. Howard Dean screams and reveals his inner madman. Rick Perry says “Oops” and proves he’s a dolt. Marco Rubio short-circuits and the public says, See, he’s a soulless robot.

Markey’s worst blunder came during a debate with Gabriel Gomez, a Republican and former Navy SEAL who challenged Markey when they vied to fill John Kerry’s Senate seat in 2013. Overall, Markey won the debate—he came off as more polished and sincere—but there was one moment when he faltered. The moderator asked both candidates about Obamacare’s controversial tax on medical devices. The question was a gimme for Gomez: Like any self-respecting conservative, he was against it. But it was thornier for Markey. In fact, it’s hard to imagine any question better suited to tripping him up. It brought together Obamacare (which he loves), the source of funding for a social program (also good), and a tax that hurt an important Massachusetts industry (bad). He couldn’t find his way through the thicket.

By the time he finished, Markey looked as confused as everyone else.

Luckily for him, Markey was running in blue Massachusetts, where sitting congressional Democrats have to go to extraordinary lengths to lose elections. Ultimately, Markey’s gaffe barely registered here at home. But outside the state’s bubble, conservative media reacted with glee. “Worst Debate Answer Ever?” blared the conservative blog Hot Air. National Review, in its more subdued tone, simply posted the video with some incredulous commentary—content to let Markey hang himself with his own words.

To his critics, if not to the average Massachusetts voter, this moment represented all that is wrong with Ed Markey. It proved he was a dullard and an unrepentant Big Government liberal. After all, he couldn’t even bring himself to condemn an unpopular tax that hurt the economy of his own state. (In another Markey moment, equally delicious to conservative media, a reporter asked him to name a tax he had opposed in his 30-plus-year career; he couldn’t come up with a single one.) “Ed’s never been afraid to let the government tell you what to do,” Barton, the Texas congressman, told me. Critics of Markey’s politics, like Barton, also charge that Markey is content to let regulators muck up the gears of the American economy, that he doesn’t place sufficient trust in free markets, and that there’s never a problem too small for government intervention.

When I asked Markey about this critique, he paused to consider the question, and then said, “To the extent that I listen to ordinary people and their individual problems that need some remediation, then I plead guilty.” He added, “In a way I’m a sucker for somebody coming into my office with a problem and asking me if I can do something about it.”

His answer struck me not so much as careful messaging, but as the articulation of a deeply felt political philosophy. Making it more convincing: He was essentially copping to his critics’ main charge—that he feels compelled to use the government to solve any problem that crosses his desk. Sitting in his DC office one evening, as the sun set, Markey told me, “When Donald Trump says to families in New Hampshire or Ohio, ‘I can’t believe how huge this opioid epidemic is and I’m going to do something about it,’ they believe him.” His voice trembled with emotion as he talked about Republican proposals to provide $45 billion to fight the opioid epidemic, roundly acknowledged as a mere drop in the bucket: “He made a promise to fight for them and they voted for him because of that promise.”

Despite his decades of cutting deals in the hallways and committee rooms of Congress, there is something of the Parks and Recreation character Leslie Knope in Markey: the idealistic, optimistic do-gooder who is impervious to cynicism and believes that public service through government is a kind of higher calling. “Politics brings out the best and worst in people,” he said. “And, over time, it’s revealed who has the public interest in their soul.”

On the final night of the fight over repealing Obamacare, Markey was on the floor of the Senate chamber, along with his fellow Democrats. But they were powerless. The Republicans would either muster 50 votes or not and the Democrats could do nothing about it. Republican Senate Majority Leader Mitch McConnell huddled with Louisiana Senator Bill Cassidy, their heads tilted toward each other, chatting gravely. John McCain, who had threatened to vote against the repeal, was surrounded by three colleagues and gesticulating emphatically. The Republicans knew it would be close. With Republican Senators Susan Collins of Maine and Lisa Murkowski of Alaska locked in as no votes, the party’s leadership couldn’t afford a single additional defection.

As that drama played out, Inhofe, of snowball fame, discreetly crossed the floor of the Senate chamber and approached Markey. From a distance, it might have looked like they were just engaged in small talk—and, in a sense, they were. Later Markey told me that Inhofe had a simple message: If the Republicans ever put together an infrastructure spending bill, as the president had promised, he and Markey should work together to pass it. To make that happen, Republicans—and Inhofe, who will lead the effort in the Senate—will need to muster 60 votes, which would mean securing a handful of Democrats. Markey told Inhofe he’d be happy to help. In fact, he already has a few Massachusetts infrastructure projects in mind that could use funding.

As long as Washington remains Republican-controlled and the legislature gridlocked, these incremental gains are the most any Democrat can realistically hope to achieve. And, unless Elizabeth Warren is our next president or vice president, Markey will likely finish his career in the same role he plays now: working in her shadow to advance progressive policy priorities. “His skill set is probably more relevant now than it’s ever been,” Keller says. Despite Markey’s low profile and his quirks, it is hard to imagine who could replace him and credibly claim to be an upgrade. Joe Kennedy III is better known and Seth Moulton has a bright future, but neither can match Markey’s relationships or his legislative bag of tricks. Massachusetts could elect a competent neophyte—say, a Harvard policy wonk—but subject-matter expertise does not a successful legislator make. That’s what aides are for. Besides, every congressional colleague and outside expert I spoke with praised Markey’s knowledge of policy. “By congressional standards,” says Stephen Young, a scientist who has worked with Markey on nuclear policy, “he’s a genius on the issues.”

A couple of hours after Markey’s chat with Inhofe, McCain approached the lectern and—in a moment that has already entered the annals of political history—gave the decisive thumbs-down to repealing Obamacare. Not long after, at around 2 in the morning, Markey was on CNN, as chipper as ever. “Millions of Americans…can sleep easier tonight knowing that their healthcare hasn’t been ripped away from them,” he said. But he couldn’t really claim credit. If he had accomplished anything that night, it was by taking one little step toward expanding his influence in a private chat with a natural political enemy out of the view of television cameras.

This humble role makes for an odd final chapter for such a long-serving legislator. But Markey seems content with the arrangement. He has given no indication of political ambitions beyond being Massachusetts’ junior senator. Which makes sense. He’s a 71-year-old with fairly low name recognition in a party that has a surplus of aging liberals. He told me, without wavering, that he intends to run for reelection in 2020. Presumably we’ll send him back to Washington for yet another term, and let him do what he does best.