Pro Athletes Made the Case for Marijuana in Boston

Athletes for Care says it's not just for stoners, and it's time for leagues and athletes to get on board. 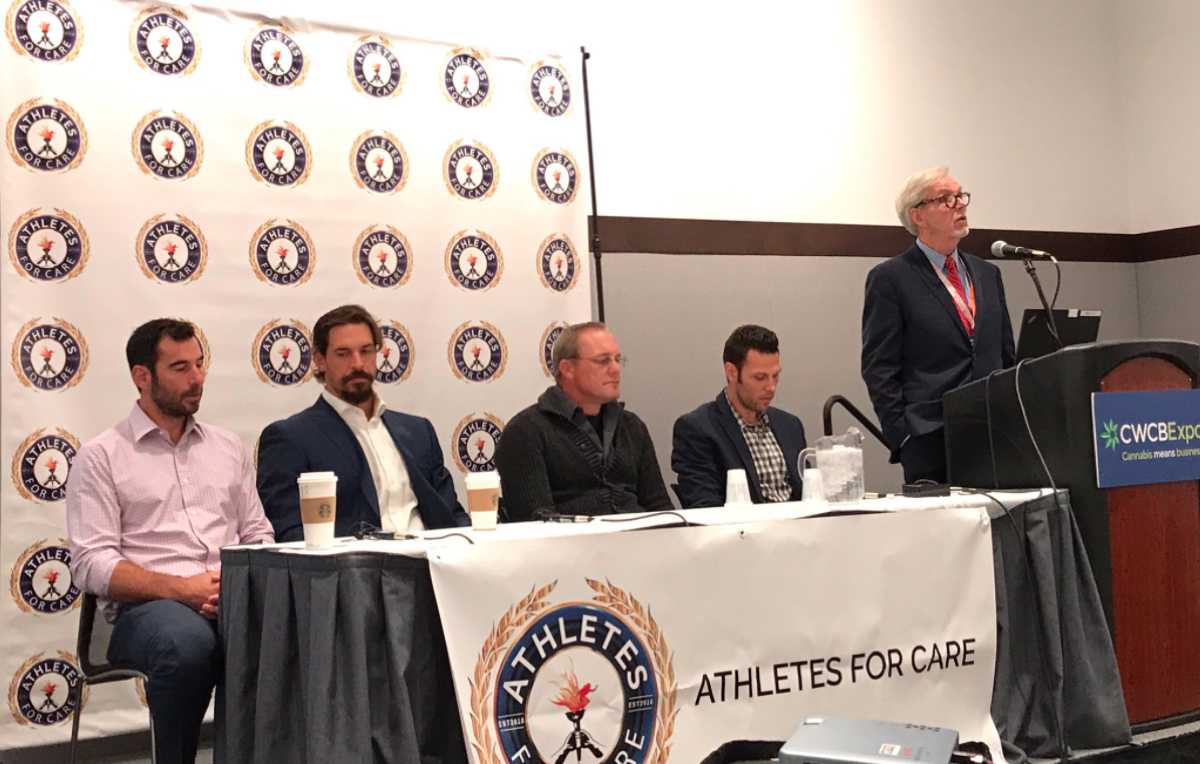 Photo via Lane Radbill of Athletes for Care

As the struggles of current and former professional athletes have come under increased scrutiny in recent years—including traumatic brain injuries and reports linking contact sports with opioid abuse and mental health issues—sports stars assembled in Boston this week say one possible remedy is not getting the respect or airtime it deserves: marijuana.

“Most Americans are very affected by the stigma” of the drug, says Eben Britton, a retired offensive lineman for the Jacksonville Jaguars and Chicago Bears, and a founding member of the pro-marijuana nonprofit Athletes for Care. “I think that is beginning to change.”

Britton, along with sports stars that included UFC fighter Frank Shamrock, NBA star Cliff Robinson, and the NHL’s Darren McCarty, spoke in Boston Wednesday at an event called Cannabis, Wellness, and the Professional Athlete, part of the three-day Cannabis World Congress & Business Exhibition that just kicked off at the Hynes Convention Center. Athletes for Care, which organized a day-long session at the convention on pot in sports, has emerged as the first major, athlete-backed push to get medical marijuana legalized around the country and to change minds among players, fans, and leagues about how the drug should be used and regulated. Medical marijuana has been legal in Massachusetts since 2012, and recreational marijuana is now legal here as well. The first pot shops are slated to open next summer.

The athletes say marijuana—which they say can be used to treat inflammation, manage pain, improve mood and appetite, and may even help athletes prevent and heal from traumatic brain injury—needs a reputation makeover.

“The underlying message is, hey, it’s possible to live a healthy lifestyle, and be a healthy person, and still use cannabis,” says Ryan Kingsbury, the nonprofit’s executive director. “We’re attempting to move past the antiquated stereotypes of stoners sitting on a couch watching cartoons all day.”

Advocates like Kingsbury also argue that there is more at stake, and that marijuana can help players handle anxiety, depression, and chronic pain without using opioids. A study from 2011 found players are roughly four times more likely than the rest of the population to be using painkillers.

Part of the problem, he says, are leagues. Marijuana is still banned in pro sports and the NCAA, and testing positive for pot can result in suspensions even for players who have medical marijuana prescriptions. At the same time, Kingsbury describes hearing about locker rooms where powerful pain pills were readily available. “You listen to some of the stories from these guys and there are buckets of it. Whatever painkiller they need,” he says. “It’s insanity.” Former NFL players have filed a lawsuit about an overuse of pain meds that’s been described as reckless.

If pro athletes want to use marijuana instead, Kingsbury argues, the leagues should get out of the way. “Why are these guys being punished for taking care of their bodies the best way they feel is working?” he asks. Instead, they’re “forcing them to take these powerful pharmaceuticals that really are turning them into drug addicts and are terrible for your body.”

In July, the NFL offered to collaborate with the NFL Players Association on a study of the possible benefits of marijuana for its players. The union continues to urge the NFL to adopt a “less punitive” approach to the drug.

Britton, who spent six years in the NFL getting pummeled on the field, speaks from experience about what he sees as the benefits of pot. “Pills, and opiates in particular, made me feel insane,” he says, adding that he experienced grogginess and what he described as painful symptoms of withdrawal. “Juxtaposing that to my experience with cannabis, I could come home, smoke a joint and feel revitalized physically and emotionally and ready to go out and compete at the highest level.”

Britton says he used marijuana both during and after his career to manage the pain that follows a career’s worth of bumps, breaks, and bruises. Paired with yoga, meditation, and proper nutrition, he says, marijuana use is part of a regimen of holistic care he practices and promotes for his peers. Not all of them are on board yet, but he hopes that mindset is on the way out. “Many guys are like, ‘No, man, I can’t take something that’s illegal,'” he says. “So it’s about creating this safe arena to speak about this issue, to share experiences. I think it’s really important for the evolution of how we take care of ourselves as athletes.”