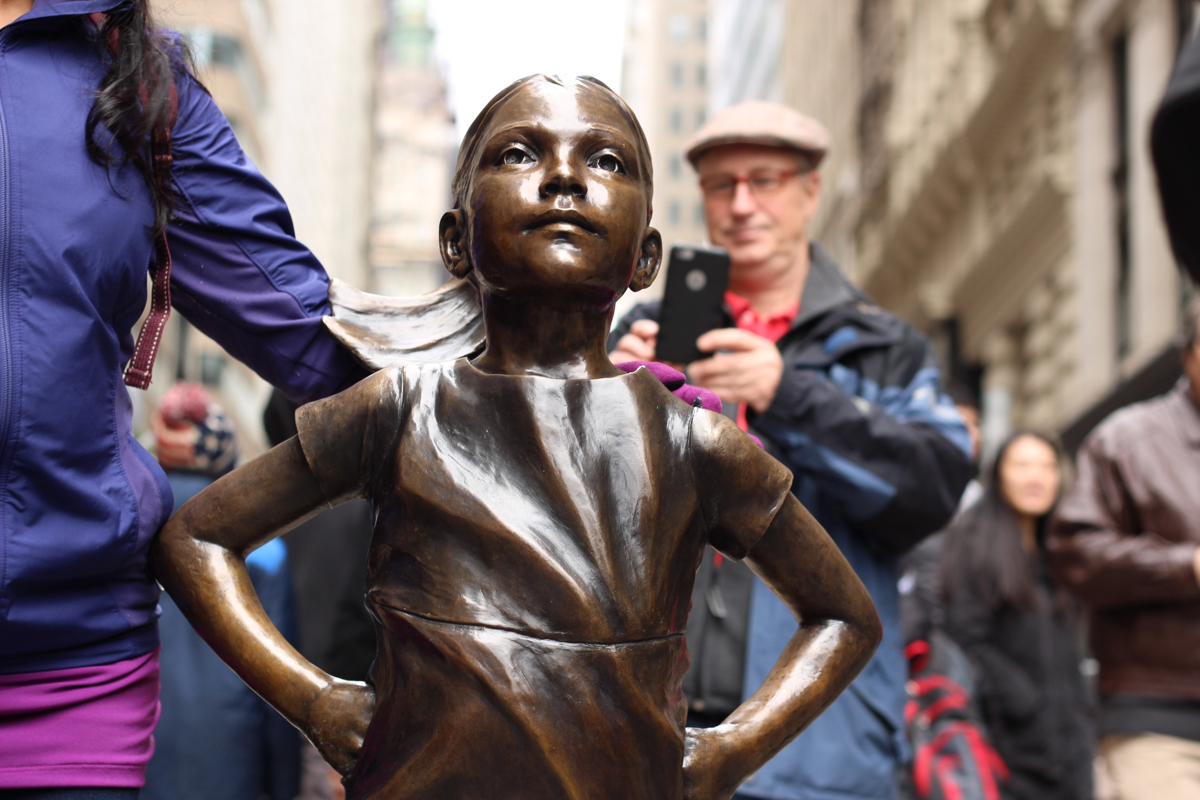 Today is not a good day for the “Fearless Girl.”

State Street, the Boston-headquartered firm that erected the now-iconic bronze statue in Manhattan as part of a campaign to promote gender diversity in finance, has found itself at the center of a new controversy: a $5 million settlement to women and black executives it allegedly underpaid.

The agreement comes after a federal audit by the U.S. Department of Labor’s Office of Federal Contract Compliance Programs found that 305 women executives and 15 black vice presidents were paid less for their work than their peers in 2010 and 2011. The millions they will be awarded include back pay and interest.

State Street Corp disputes the findings of federal auditors. “State Street is committed to equal pay practices and evaluates on an ongoing basis our internal processes to be sure our compensation, hiring and promotions programs are nondiscriminatory,” a State Street spokesperson says in a statement to media. “While we disagreed with the OFCCP’s analysis and findings, we have cooperated fully with them, and made a decision to bring this six-year-old matter to resolution and move forward.”

The news is the latest in a  churn of controversy that subsidiary State Street Global Advisors sparked in March when it plunked its statue of a young girl staring down the iconic “Charging Bull” on Wall Street. The statue, which was immediately embraced by advocates for women around the world, also promoted State Street’s SHE Index focused on companies with higher proportions of women on its boards. It ticked off observers who saw it as a cheap ploy for good press, and angered the bull statue’s sculptor, Alex Gardega, who said it both exploited and denigrated his masterpiece. It made him so mad he erected a statue of a dog urinating on its leg. The statue, meanwhile, had been good for business, leading to a big boost in State Street’s first quarter this year.

But it’s not like State Street didn’t see this storm coming, either. Auditors alerted the firm to the results of its findings in March. And State Street Global Advisors CMO Stephen Tisdalle has previously addressed criticism about State Street advocating for women in leadership when it, itself, was not “perfect.” Here’s what he said at a recent panel, according to Adweek:

He told the audience: “Do we as an organization reflect the penultimate makeup and reflection in being a diverse organization? No. And that was a risk because a lot of the people felt the message might be diluted by a lot of cynical people saying, ‘Well who are you to talk about gender diversity when you’re not a perfect embodiment of it?’”

He continued: “What I would say to that is we had a foundation we could go back to to say why we did Fearless Girl, and no matter what anybody said, no matter what rocks were thrown, we could say, ‘You’re right, but this is the way we invest, this is the way the world needs to invest, this is a human moral value. How can you argue against it? We have to be doing better ourselves. She’s as much an inspiration to our organization as she is to the world.”

For those who were ready to dismiss the statue outright, the settlement makes it that much easier to do so, and it has super-charged the criticism of the firm for what many believe is an empty, publicity-grabbing gesture, and nothing more.

Can’t put a finger on why but for some reason politics of easy representational gestures don’t fix real world harms. https://t.co/Ctlg6n5nA8

Ironic: the Raging Bull is a piece of guerilla art. Fearless Girl is a marketing ploy by State Street, a company that underpays women. https://t.co/yT9jCyJnUM