Harvard Is Taking Back a Medal from Harvey Weinstein

The producer and accused sexual predator will have his W.E.B Du Bois medal rescinded. 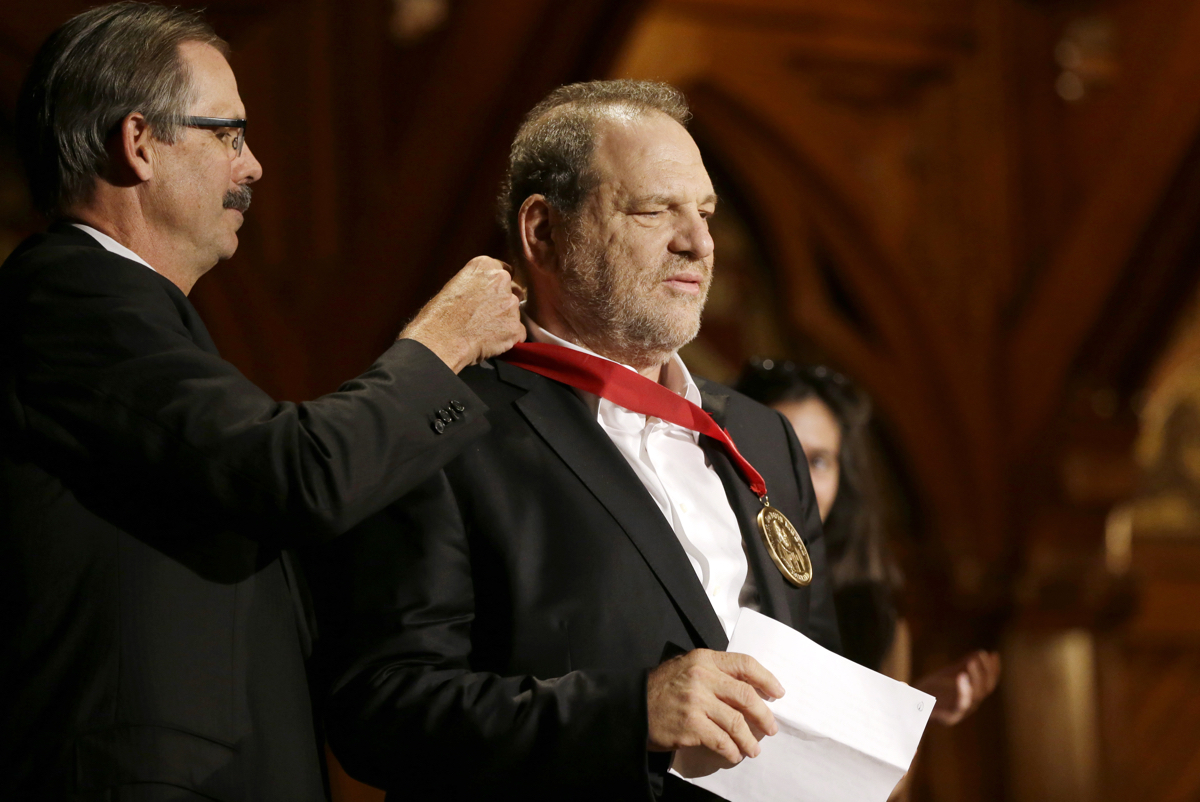 Harvey Weinstein, right, is presented with the W.E.B. Du Bois medal by Glenn Hutchins during ceremonies Tuesday, Sept. 30, 2014, on the campus of Harvard University. Photo via AP

As American institutions reckon with the undoing of Harvey Weinstein, the powerful movie producer and accused sexual predator, Harvard University has decided to take back a prestigious medal it awarded him in 2014.

Harvard’s five-member Executive Committee of the Hutchins Center for African and African American Research voted unanimously on Tuesday to rescind Weinstein’s W.E.B. Du Bois medal, the Harvard Crimson reports. “We stand with the women who have courageously come forward to fight for themselves and indeed for all of those who have experienced similar abuse,” the professors who make up the committee said in a statement to the student newspaper.

The honor, according to an official website, “is awarded to individuals in the U.S. and across the globe in recognition of their contributions to African American culture and the life of the mind. Recipients have included scholars, artists, writers, journalists, philanthropists, and administrators whose work has bolstered the field of African and African American Studies.”

In 2014, it was also awarded to eight other prominent figures, including Maya Angelou, Rep. John Lewis, and Oprah Winfrey.

Dozens of women have come forward to accuse Weinstein of sexually harassing and assaulting them, revelations that burst into public view with bombshell reporting in the New York Times, but which had apparently long been an open secret in Hollywood and among Weinstein’s extensive circle of high-powered friends.

New Boston Post earlier this week reported on the speeches made at the award ceremony, and shared videos of speeches made about the now-disgraced film icon. “He has the keenest ear and eye for the words and pictures that entertain us and challenge us, that make us laugh and make us cry,” Henry Louis “Skip” Gates Jr., director of the Hutchins Center, said about Weinstein, according to video obtained by the Post. “His belief in the power of film has brought new voices and new visions to the fore.” Diane Paulus, artistic director of the Harvard-affiliated American Repertory Theater, also offered remarks, the Post reports. She cited films Weinstein produced, including Mandela: Long Walk to Freedom, The Butler, Fruitvale Station, 20 Feet From Stardom, and Django Unchained.

Other honors have since been stripped from Weinstein, including an honorary degree given to him by SUNY Buffalo, as well as his membership in the Academy of Motion Pictures Arts and Sciences.