The city councilor did not pull punches in his last face-off with the mayor. 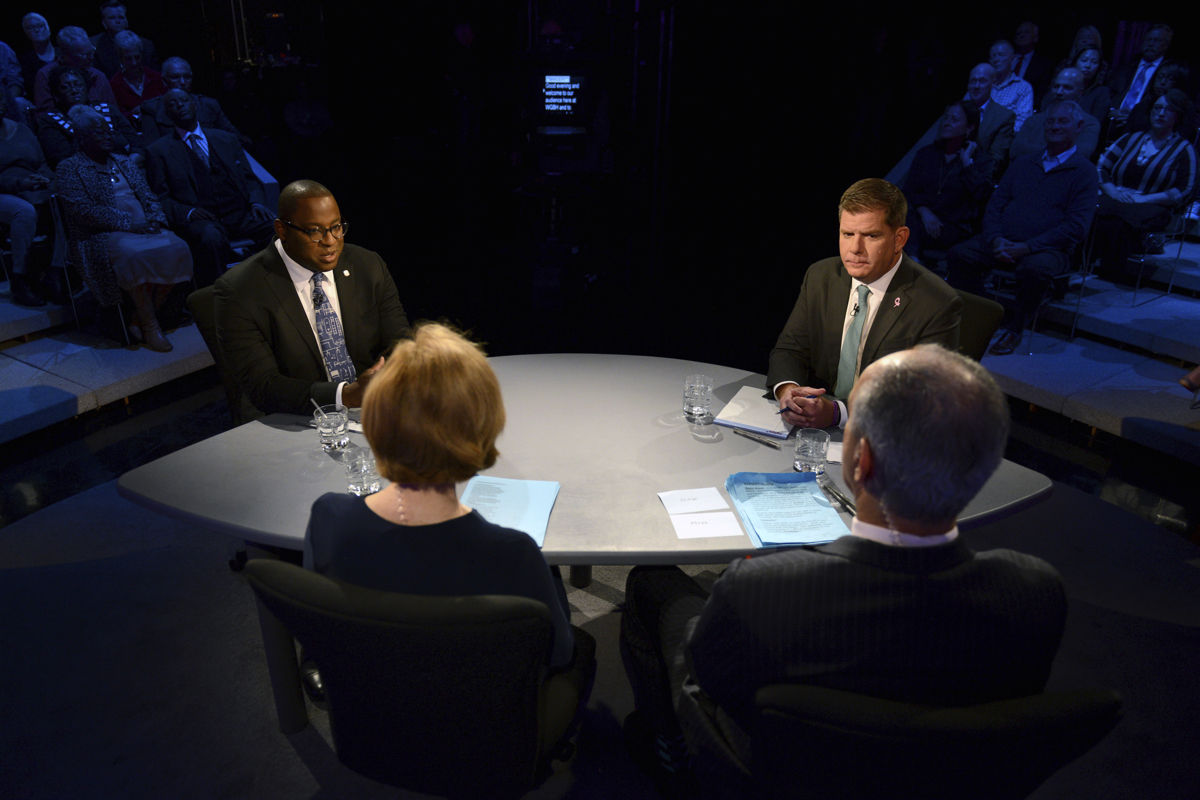 The city councilor, in the last scheduled debate between the two candidates before the November 7 mayoral election, took aim at the record of Boston Mayor Marty Walsh on WGBH Tuesday night. Jackson, who polling shows has a sizable deficit to make up if he is to win this race, did not hold back.

“We have a mayor who fast-tracks bids for Amazon, Olympics, Grand Prix, but he slow-tracks changes to education and fully funding the Boston public schools,” Jackson said, repeating what has been a refrain of his underdog bid to run City Hall: that Walsh has focused too much of his attention on the interests of the wealthy and on flashy projects at the expense of less fortunate, every day Bostonians.

Walsh, who has refuted those criticisms, pointed to his record, including improvements in state assessments of some schools and an influx of about 60,000 jobs. He denied, for example, that his administration had cut funding from Boston Public Schools, noting that the system’s budget increased by $50 million last year.

Jackson pledged that, if he were elected, he would pump an additional $30 million into the school system.

He also backpedaled some when pressed on previous comments about Walsh’s response to racial strife at the Boston Latin School. Jackson had suggested earlier int he campaign that the mayor in that case didn’t believe “black lives matter.” But at the debate, he would not say whether he thought that was truly representative of Walsh’s worldview, instead saying Walsh is “making the wrong decisions.”

Walsh defended his administration’s efforts to attract General Electric to Boston, including $25 million in tax incentives, which Jackson has held up as an example of the mayor’s misplaced priorities. Walsh argued that those tax breaks did not mean the city had written “a check” to the corporation and pointed out that GE has given millions to education and other programs in the city.

Jackson also pressed the issue of equipping Boston police officers with body cameras, an effort that has stalled. After delays, BPD conducted a year-long pilot program and is now studying whether to adopt it full-time. Jackson accused Walsh of not prioritizing the technology, even though there is generally support for its use. He called the slow pace on body cameras “paralysis by analysis” and said, “He needs to step forward and actually take a leadership role on this, and that’s what we’ve seen out of this mayor: timid, tepid leadership. And that’s why we don’t have body cams in Boston.” Walsh argued in favor of allowing a study of the issue to take its course, and pointed to figures that show violent crime has dropped in the city.

When Walsh, responding to a question about bathrooms on Boston Common, said he thought the millions in funding for parks from the construction of a controversial planned tower at Winthrop Square might be used for that purpose, Jackson derided that cash as coming from a “shady deal.”

Jackson also lashed out at Walsh for his response to a scathing “report card” from the local branch of the NAACP, which gave the mayor harsh grades on economic development, education, public safety, and diversity among city workers. Walsh had previously said he “respectfully disagrees” with the low grades the group gave him, and argued Tuesday that disparity is a long-term problem in Boston that a mayor can’t simply solve in four years. “You need to listen to what’s actually happening” Jackson said.

The candidates also sparred over the definition of affordable housing, and whether the Walsh administration had done enough to promote it.

Walsh pointed to progress on a city plan to increase the supply of housing units to 53,000, with 9,000 of them affordable. But Jackson said Boston’s definition of affordable as accessible to households was out of reach for many low-income Bostonians. They also disagreed over support for reviving rent control: Walsh dismissed it; Jackson said he could support it. Jackson also repeated his promise to up increase the minimum required percentage of units developers are required to make affordable to 25 percent, spend $5 million on housing vouchers, and also to ditch the agency previously known as the Boston Redevelopment Authority, which he slammed as non-transparent. Walsh has rebranded the entity as the Boston Planning and Development Agency, and stressed the need to promote development.

Jackson also took aim at Walsh’s decision to abruptly close the Long Island Bridge, which connected the city with a homeless shelter and addiction recovery resources, noting that millions were spent demolishing it but pledges to rebuild it have gone unfulfilled. But Walsh, who said the bridge will be rebuilt someday, argued that the bridge “was crumbling into the Atlantic Ocean” when it was shuttered, and countered that the city shouldn’t “hide” its homeless population on an island.

Jackson took criticism for not releasing a detailed breakdown of what his proposals would cost, as he had pledged to do. The candidate now says we should expect to see one in the coming days.

Jackson also criticized Walsh for keeping two staffers accused of extortion on the payroll while they await trial, and for refusing to disclose whether he, himself, had appeared before a grand jury related to the case. Walsh, asked on air to answer that question once again, refused to do so while the case is pending.

You can find the full debate here: