The Subtle Art of Being Ernie Boch Jr.

On the verge of turning 60, the billionaire Trump supporter has jettisoned his car dealerships, is building a mausoleum in his backyard, and now wants to save the arts in Boston—he thinks. 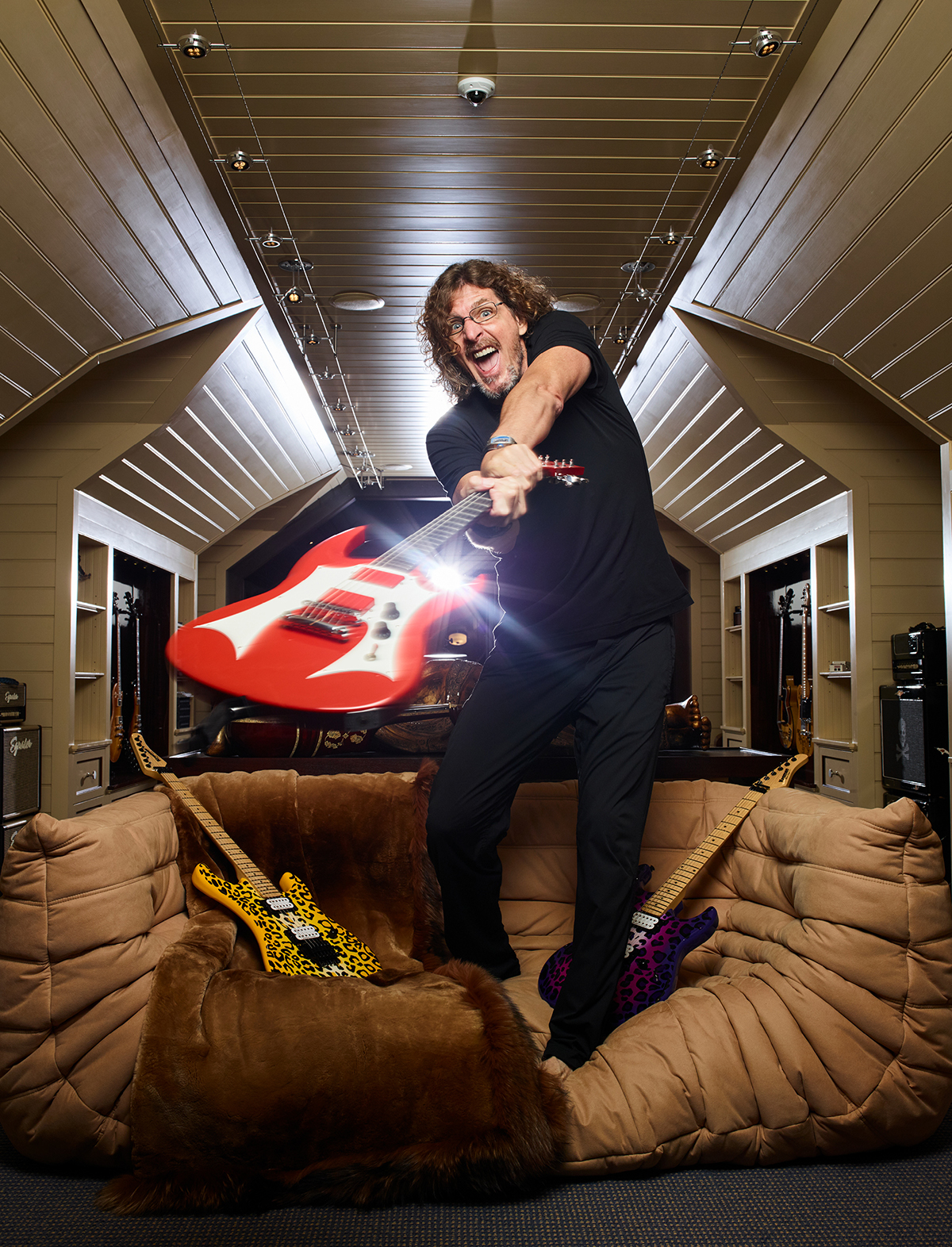 In 1997, Ernie Boch Jr. bought a mansion on a one-acre plot in his hometown of Norwood. He deemed it too small. So, to expand his holdings, he spent 20 years buying up and tearing down the homes of his 17 most immediate neighbors. “Back in Europe, they used to build houses that would last generations,” he explains, bungeeing around his property in black athleisure wear on a late-summer afternoon. “Here, they build houses that are almost disposable. It’s disgusting!” Hence Boch’s Xanadu, a 30,000-square-foot compound that houses rare sports cars, collector’s-item guitars, and one lone resident. Other predictable billionaire accessories—private jet, custom stretch limo—live nearby, and a bespoke Batmobile is on the way. There is one feature of the estate, however, that defies cliché: a mausoleum, half-built and presently unoccupied.

I ask Boch to see it. He leads me away from the main house, past a chainlink fence, and into a construction site. Carved in sober granite, the tomb is “gonna have heating, music, and a bathroom,” he says. We enter an atrium. He envisions hosting dinners and fundraisers here, presumably before he dies. Below us is the crypt itself. There is room down there for Boch and up to seven of his loved ones, though he concedes he’ll “probably end up alone.” Either way, visitors will be invited to honor his memory by listening, at the touch of a button, to a little-known Neil Young song called “Light a Candle.” Boch cues up his iPhone and we bow our heads to listen.

Instead of cursing the darkness,
Light a candle for where we’re going,
There’s something ahead worth looking for.

When the light of time is on us,
We will see our moment come,
And the living soul inside will carry on.

After a minute of silent reverie, Boch shuts off the song. “Isn’t it great?” he says. “I love Neil Young.” Then he leads me downstairs and shows off a drainage system for corpse fluid.

Boch is 59 years old. Tall and lanky, he cuts a youthful figure. He’s diabetic, so he eats frequently, but stays slim with a high-protein, low-carb regimen. He takes delight in his many shiny toys, and has a charming tendency of bugging his eyes and squealing “whaaaaaa?!” when something astonishes him, which is often. At the same time, he’s got the weather-beaten mien of a graying playboy. Factor in the shoulder-length hair, and he looks like an unholy mash-up of Sammy Hagar and Howard Stern. Ernie Boch Jr. is sort of ageless, but in the way that we refer to people who are closer to the mausoleum than they’d like.

Two years ago, Boch sold off the last of the retail car dealerships that made Boch a household name and began turning to grander projects. He hosted Donald Trump at the manse for an elaborate campaign bash, and became Trump’s off-kilter cable TV surrogate long before anyone took the candidate seriously. He traveled to Uganda to film a National Geographic reality show in which he built up an impoverished village. Most intriguingly, the rock-music obsessive has become a preeminent local patron of the performing arts, agreeing last year to underwrite the organization that runs the Shubert and Wang theaters, which are now collectively known as the Boch Center.

These are legacy-making gambits. Obituary bait. The impetus for this story, at least in theory, was to sketch the man as he contemplated his final chapter, turning away from profit and toward philanthropy. With the city facing an acute crisis in arts funding, would our raffish new-money scion step unto the breach? Arrangements were made for me to stay in the guesthouse on Boch’s property for a 48-hour period, all the better to witness the mogul’s unique brand of largesse.

That said, Boch is comically uninterested in the narrative I’ve mapped out for him. He resists articulating a coherent vision for the future of Boston’s arts, though he trolls me by insisting to nearly everyone we meet that I’m “doing a story on the arts in Boston.” He is reticent when discussing his charitable work, but more than happy to chat about, I don’t know, having sex on a rubber raft with a geisha. When it comes to understanding the heir to the Automile, it may not be possible to distinguish his man-child eccentricities from his idiosyncratic attempts to leave behind something lasting and good.

I ask Boch if building a tomb within view of his bedroom hints at an existential reckoning. On the contrary, he insists, the decision was purely practical. “When you die, where are you gonna go? You gonna go to some cemetery?” he asks, disturbed. “I want to stay here! I don’t want to go with a bunch of strangers.” Couldn’t he have arranged this without erecting a morbid shrine to himself? “Yeah, I suppose,” he answers, after a vanishingly brief moment of contemplation. “But come on!”

Many a tacky ad campaign has wormed its way into New England’s collective psyche. Consider the soaring Giant Glass jingle. Consider sweet, old Bernie and Phyl. The godfather of 30-second schlock, though, was Ernest Boch Sr. He inherited a gas station and a single car dealership from his father, then turned the family business into a retail empire that included Dodge, Honda, Toyota, Mitsubishi, and others. In the 1970s, he solidified Boch Automotive with the genius purchase of Subaru’s entire New England distributorship —just as Japanese cars were getting hot—effectively giving him a cut of every Subaru sold in the region. He eventually dubbed his strip of lots, lining Route 1 in Norwood, the Automile. But he was best known for his TV spots, which were as idiotic as they were memorable. He smashed windows, he jumped out of trunks. And, of course, he beckoned television viewers to “come on down,” with a painfully awkward swoop of an arm.

Boch Sr.’s carnival-barker persona was central to his success, but misleading on the whole. There was nothing freewheeling, or fun, about him. He didn’t drink, smoke, or eat red meat. He chewed out employees with relish and negotiated sadistic ad rates with local TV execs. By the ’80s, he was rich enough to buy his own place on Martha’s Vineyard, but he quickly ruined any chance of enjoying his stays there. The structure he erected in Edgartown was an arriviste monstrosity, with oversize everything and shower fittings plated in 24-karat gold. His horrified neighbors, including a retired Walter Cronkite, refused to hang out with him and his wife, Barbara. Boch Sr. shrugged, claiming he came to the Vineyard only to work anyway. “I’ve never laid on the hammock,” he asserted at one point.

Ernie Jr., sole brother to three sisters (as well as three other half-siblings), was opposite in temperament. A teenage guitar noodler, he was admitted to the Berklee College of Music, back before it required auditions. After school, he tried to make it as a touring musician. We’re riding in the back of his stretch Subaru, on our way from Norwood to visit the Boch Center in Boston’s Theater District, when he begins to discuss his misspent youth. With us is Boch’s publicist, Peggy Rose. Up front is Ned, his driver, who is weaving the limo through traffic at alarming speeds, causing Boch to yell things like “Ned! Slow lane!” before returning to his story. “So I graduate from Berklee,” he says. “Play in a bunch of shitty bands. Go on the road in Canada, it’s a fuckin’ nightmare.” It was 1983 or so. Boch never envisioned working for the family business, but he ran out of cash and slunk back to Norwood to take a sales job at one of the dealerships. “I went from making $150 a week to $1,500 a week,” he tells me. “And I just got hooked.”

The dough was nice, but Junior didn’t really fit in. As a kid, he had missed out on the counterculture. “I remember when Woodstock happened, I was crying that I couldn’t go,” he says. “I was too young to be a hippie.” So rebellion assumed more quotidian forms: He partied. By day Boch hawked cars; by night he was hanging around WBCN with Aerosmith’s Joey Kramer and Extreme’s Paul Geary. Then–Boston Herald gossip columnist Laura Raposa met him on the cocktail circuit, and Boch became an “Inside Track” fixture. The car salesman was irrepressible; he fondly recalls romantic conquests, at everywhere from the downscale Norwood Chateau to the Bloomingdale’s makeup counter. When he proposed marriage to an off-and-on girlfriend named Brenda Latch in 1994, Raposa and her co-columnist, Gayle Fee, wrote that “flags are flying at half-staff on the Auto Mile.” The wedding was ultimately called off.

Boch’s bon vivant lifestyle wasn’t a boon to family relations. “I’d be in the local paper for something,” he says. “But when I was in it, [my father] would be like, ‘You shouldn’t do that.’” Here, Boch may be understating the tension between himself and Boch Sr., who fired him from dealership jobs at least twice. “He was meant to play guitar, not sell used cars,” says George Regan, who does publicity for rival Herb Chambers, and is friendly with Boch. “I can’t tell you how many times Ernie and I toasted each other to his unexpected retirement.” He adds, for good measure: “Being the son of a madman who fired you every week was really tough.”