Shot in the Dark

Big pharma helped create the opioid crisis. Now one local drug company is trying to end it with a single shot. But is the cure all it’s cracked up to be? —By Chloe Fox 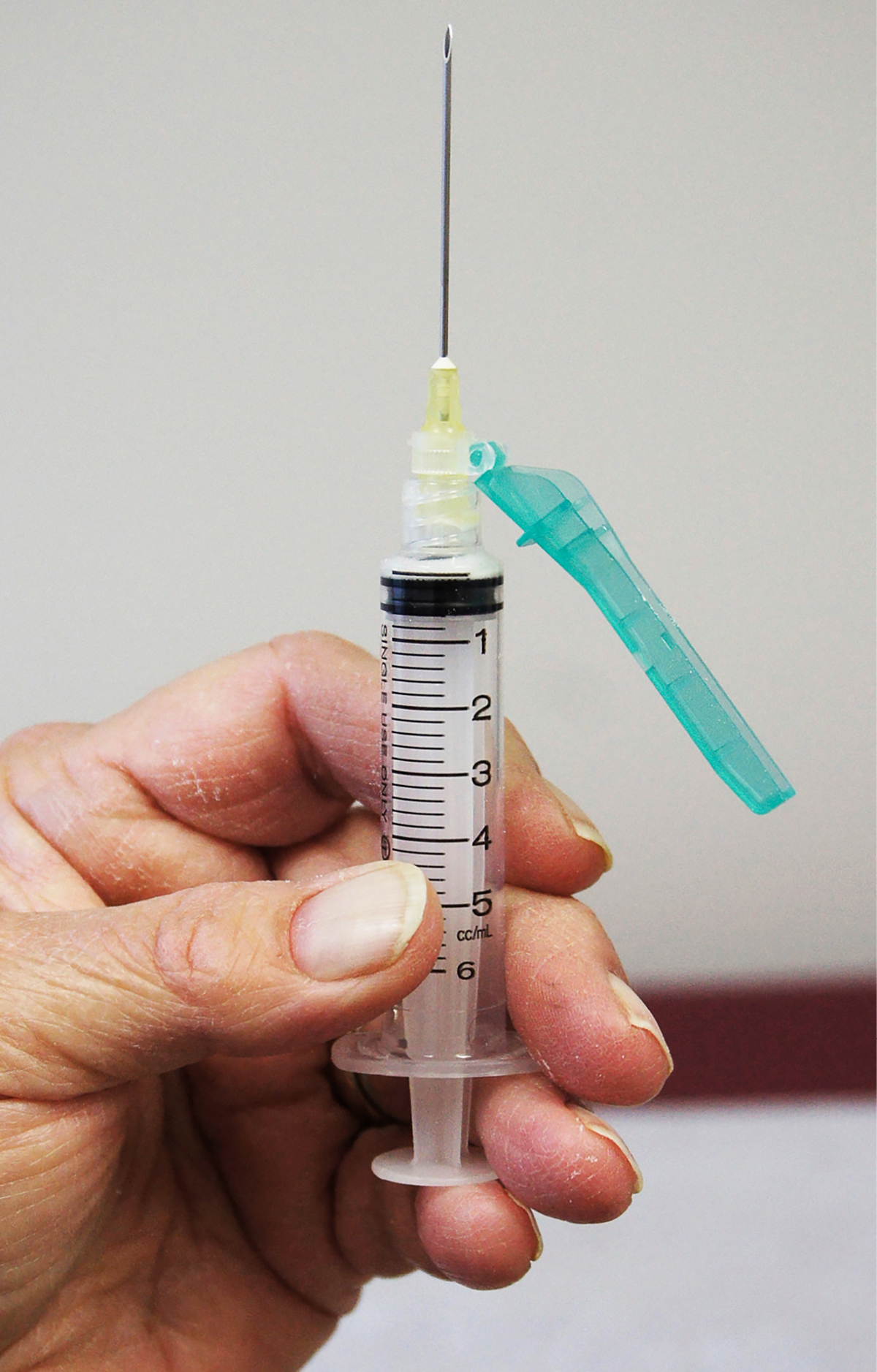 “This is it,” the sheriff told Nick. “We don’t want to see you around here anymore.” Standing in Nick’s cell in the Barnstable County Correctional Facility, Sheriff James Cummings’s frame filled the cramped, fluorescent-lit space. For almost four years, Nick had been in and out of Cummings’s jail, and the sheriff, a heavyset man with more-salt-than-pepper hair, was there to deliver a kind of pep talk to the 22-year-old inmate. “Good luck,” he said, though both of them knew it was going to take more than that for Nick to stay out of trouble during his two-year probation. Which is why Nick had volunteered to be the first participant in a new program for opioid addicts, one featuring a miracle drug that promised to save him even from himself.

When the time came, a few days before his release, a guard led Nick from his cell to the infirmary. In the dim light of the little sterile room, the syringe’s milky-white contents looked almost iridescent. Nick pulled down his blue jump suit, felt a pinch, and just like that, it was over. He returned to his cell excited, even hopeful. That one shot—of a new drug called Vivitrol—would help protect him for almost a full month, the active ingredient binding to opioid receptors in his brain, to dampen his cravings and make it almost impossible for him to get high. Developed right here in Massachusetts, it almost sounded too good to be true: a way to keep his brain safely jailed even as he stumbled unsteadily and freely back into the real world.

Since that first shot in April 2012, hundreds more inmates at Barnstable County Correctional have received Vivitrol before being released. The program that Nick inaugurated has gone on to make Cummings a national figure who’s made appearances across the country and earned nods of recognition from major newspapers and even the White House. Heavy advertising and lobbying to the tune of $13.9 million since 2013—not to mention $23,000 in political donations in Massachusetts since 2013—have made Vivitrol and its manufacturer, Waltham-based Alkermes, into indisputable contenders in any new opioid treatment plan. Thanks to their efforts, there are now 450 programs just like Barnstable’s across 39 states, including 11 in Massachusetts. Governor Charlie Baker has even toured the Barnstable facility. State Senator Jennifer Flanagan and state Representative Elizabeth Malia, both currently sponsoring Vivitrol-related bills, have bought in whole hog. “I think it can be a lifesaver,” Flanagan told me.

But while Nick’s shot in Barnstable marked the beginning of promising addiction programs run out of jailhouses and courtrooms throughout America, Vivitrol is not necessarily a magic bullet. Some patients report that the very thing that makes the drug so effective—the opioid receptor blockers—also deprives them of natural pleasure-producing brain chemicals, sending them into dark depressions. Some turn to other drugs to cope, and all Vivitrol recipients have a higher risk of overdosing on opioids if they relapse after the shot wears off.

Critics also say Alkermes’s marketing campaign rests on philosophical, even moral, fault lines, peddling a version of the punitive “abstinence-only” narrative that plays up stigmas against narcotic competitors such as Suboxone and methadone, which partially activate opioid receptors in the brain and have long track records of success. Alkermes chairman and CEO Richard Pops once went so far as to say to the New York Times that people who choose methadone or Suboxone over Vivitrol “aren’t strident about wanting to be drug-free.” But it’s not always that simple. “We don’t like substance use in this country; we moralize it,” says Nate Robertson, a recovering addict who has worked in treatment centers on Cape Cod. “Vivitrol speaks to that. We can inject this thing into you and you literally cannot feel high. From an outsider looking in on addiction, that seems like a good idea. But for the folks who know it, that’s dangerous.” In other words, there’s more to sobriety than just refraining from drug use, and if you’re going to take away someone’s unhealthy coping mechanism, you’d better have something to put in its place.

As the government has increased its scrutiny of drug makers’ role in creating the opioid crisis, some have asked whether a pharma solution is the right approach for a pharma-created problem. This summer, reports by NPR, the New York Times, and others questioned whether Vivitrol’s newfound popularity had more to do with its ad campaigns and corporate outreach than proven results. A June report by Physicians for Human Rights lamented that while Vivitrol “appeared to have the most support in many of the drug courts visited” by the organization’s researchers, the drug “has the weakest evidence base of all Food and Drug Administration–approved treatments for opioid dependence.”

To many policymakers, including Cummings, Vivitrol is everything it claims to be: a helpful safety net for those in recovery and a useful tool in the midst of a crisis that is running dangerously short on solutions. To its critics, though, the new drug epitomizes a cardinal problem of the opioid epidemic: that drug companies and law enforcement, often motivated by profit and bias, are making medical decisions with lives in the balance. While the addiction-treatment community calls for an all-hands-on-deck approach, Vivitrol is often the only option for inmates about to reenter the world. In our desperation to find a cure for the opioid crisis, are we placing too much faith in a would-be wonder drug whose outcomes we don’t yet fully understand?

If not for a couple of politicians from Cape Cod, Vivitrol might never have found its footing. In June 2011, newly elected state Representative Randy Hunt was sitting in a hearing room on the first floor of the State House watching a bill die. Alkermes had paid the political titan and former Lieutenant Governor Thomas O’Neill III $6,000 to lobby for the bill (of the $338,000 it has paid to his firm, O’Neill and Associates, since 2011), which would set up a program to use their newly approved drug at the Suffolk and Middlesex jails. On the floor, however, the debate was souring over cost concerns. There wasn’t much data to back up the drug company’s claims, but Hunt was still impressed with the testimony in favor of the product. He liked that it gave “the brain time to kind of rewire back to where it should be,” he told me. As a Republican, he didn’t have a lot of power on Beacon Hill, but he was eager to make good on his campaign promise to fight the opioid epidemic; this drug seemed like a good place to start. So when the bill didn’t go anywhere, he did some of his own research, phoning Joshua Lee, an addiction specialist who had testified at the hearing, as well as Alkermes itself. Then he called Sheriff Cummings.

“Jeez, it looks pretty good,” Cummings recalls thinking when he answered Hunt’s call. Sitting in his Bourne office, the sun reflecting off the accolades that line the walls, it’s clear Cummings has told this story before—but he doesn’t mind repeating it. For years, he’d been skeptical of methadone and Suboxone because, as synthetic opiates, they can still produce a mild high and are traded by inmates. “We spend all our time preventing Suboxone from being smuggled into the correctional facility,” he tells me. Of the 3,200 jails around the country, fewer than 40 offer either therapy to inmates. Still, as the opioid crisis has turned jails into ad hoc detox facilities, law enforcement has grown eager to do something—anything—to stem the tide of addicts filling their cells. Vivitrol seemed like a chance to offer treatment to inmates without the pitfalls of carting in desirable drugs. “We talked to the folks from Alkermes,” Cummings says, “and decided we’d give it a shot.”