The Whydah sunk in 1717 and remained hidden for more than 250 years. 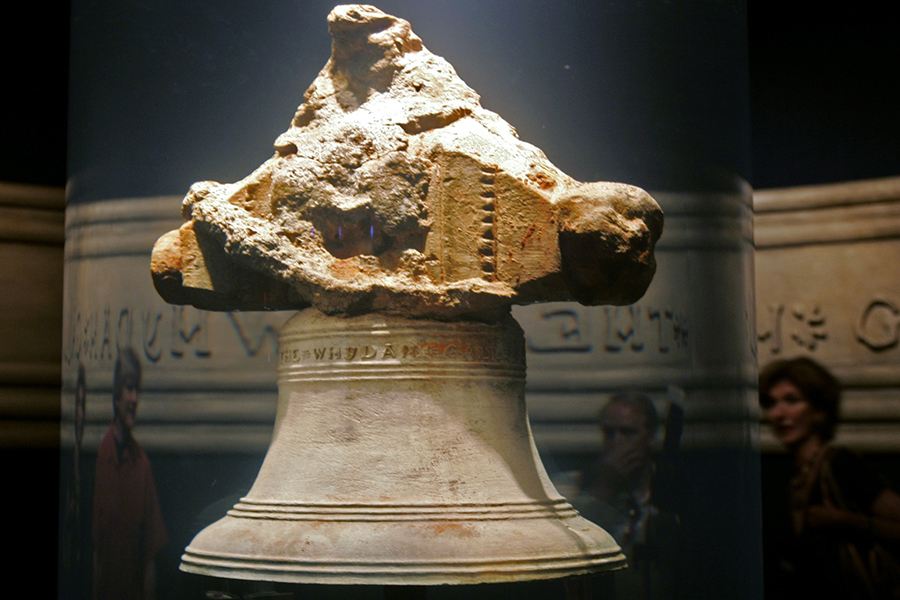 The bell from the pirate ship Whydah. Photo via AP Photo/Al Behrman

The year was 1715, and a 100-foot ship by the name of Whydah sailed out of London at the command of Lawrence Prince. The ship was fast, an asset to the European trade industries linking England, Africa, and the West Indies. Its name gave a nod to the West African port of Ouidah, where the crew traded cloth, liquor, and tools for slaves by the hundreds.

That February, however, English pirate Samuel “Black Sam” Bellamy sailed the same waters in the Sultana and the Mary Anne. His two vessels did what pirate ships do best: They overtook the Whydah. Bellamy and his crew arrived in two ships and left in the same number, leaving Prince and his remaining crew—defeated, but alive—with the Sultana.

Under new leadership, the Whydah sailed the Atlantic, its crew plundering ships along the way. In early April, Bellamy steered his ship to Cape Cod, where he allegedly hoped to visit his mistress, Maria Halett, residing in Eastham.

But alas, the lovers would never meet again. A nor’easter struck on April 26, 1717, and the Whydah crashed off the coast of Wellfleet. The crew had numbered roughly 150, but only two men would walk ashore. One man, John Julian, survived and escaped capture, but the other, Thomas Davis, was not so lucky. Davis, along with the seven others who survived the wreck of Bellamy’s second ship, were tried in Boston courts. Six were hanged for piracy, but not before they could gloat about their stolen treasures. According to the pirates who testified, the Whydah held 30,000 pounds of silver, 10,000 pounds of gold, and 20 tons of ivory and jewels.

And where was this sunken beauty? That’s the question treasure hunters were asking for more than 250 years.

Immediately following the Whydah‘s wreck, locals plundered the ship’s valuables as the bodies of pirates washed ashore. Cyprian Southack, a cartographer, was hired to note the location of the shipwreck and gather treasures for the crown. Rolling seas soon buried the Whydah, but Southack’s map, journals, and letters would survive for centuries.

Fast forward to October 30, 1985. For the four years prior, undersea explorer and Massachusetts native Barry Clifford had been dedicating his life to studying records, mapping land transformations, and searching for iron scraps near Wellfleet. While divers turned up metals from the Whydah’s time period, there had been no proof the artifacts belonged to the infamous pirate ship. Finally, as October came to a close, Clifford found his proof. He and his team discovered and revealed an old bell whose blotched surface was chiseled with “The Whydah Gally 1716.”

The Whydah became the first authenticated pirate shipwreck in North America, and Clifford became a treasure hunter. Since 1985, Clifford and his team have recovered around 200,000 artifacts, including silver Spanish coins, gold African jewelry, colonial-era objects, cannons, and other ship scraps—but they have had to fight to keep it all.

According to the Boston Globe‘s 1986 account, Massachusetts state law says officials have the authority to supervise the recovery of any wreck found within three miles of the shore. The state also has the right to claim one-quarter of the profits from these operations. Clifford took this law to court, and in 1988 he won his case. Custody of the wreck was bequeathed to Clifford in entirety, because, well, finders keepers. He has the federal “law of finds” to thank for that victory.

And in addition to legal battles, Clifford and his team of divers fight physical battles, too, as they plunge under 30 feet of water and more than 10 feet of sand to reclaim Whydah artifacts. The metal buttons, cuff links, and fancy accessories discovered suggest that pirates—at least Bellamy’s pirates—were more sophisticated than history’s portrayal. Curious Cape-goers can learn about these pirates and view the artifacts at the Whydah Pirate Museum in West Yarmouth, Massachusetts. Nearly all the Whydah’s resurfaced history is on display there.

“I made a promise to myself early on that I was never going to sell the treasure, that we would keep it all together,” Clifford told Great Big Story. “My crew and my family, and people who have worked with me over the years have all felt the same way about preserving this for our cultural heritage.”

Despite his amicable goals, many in the scientific and archaeology communities question Clifford’s ability to safely resurface the treasure. While historic artifacts continue to be found, treasure chests worth millions of dollars have yet to appear, and their existence is predicated on the testimony of pirates, who aren’t exactly the most up-standing or reliable citizens. On top of that, UNESCO has discredited Clifford’s finds twice within the last three years. Clifford claims UNESCO has a vendetta against him, targeting him as a representative of private-sect0r archaeology. Clifford has made broad, unproven claims before, excited to share his finds before he can prove their legitimacy. It’s his “intuition” that leads him to be so confident in his discoveries. “Intuition means a lot when you’re looking for things and discovering things,” he told the Washington Post.

But it looks like Clifford’s intuition may just pay off after all. Around this time last year, he announced that after more than 30 years, the team had finally found the treasure hidden on the sunken Whydah. They’ve discovered a large metallic mass that may contain most or all of the alleged 400,000 coins hidden below sea. Further deconstruction of the mass will reveal if Clifford’s gut is right this time.

Regardless if the treasure is found, the mystery and awe of the Whydah‘s history continues to engage pirate-enthusiasts and Cape Cod vacationers alike. Back in 1999, National Geographic attended a dive with Clifford and captured a moment representative of the sunken ship’s historical value. The explorer had just resurfaced, and presented two silver Spanish coins to his crew.

“Look at these,” he told National Geographic. “The last time a human touched them, they were either being handled by a pirate—or being used to buy human lives.”

Its tumultuous days at sea over, the Whydah rests beneath Massachusetts waters. It reveals its story coin by coin, but the treasure remains elusive.