Senator Kamala Harris of California is looking into whether the opioid addiction treatment was marketed too aggressively. 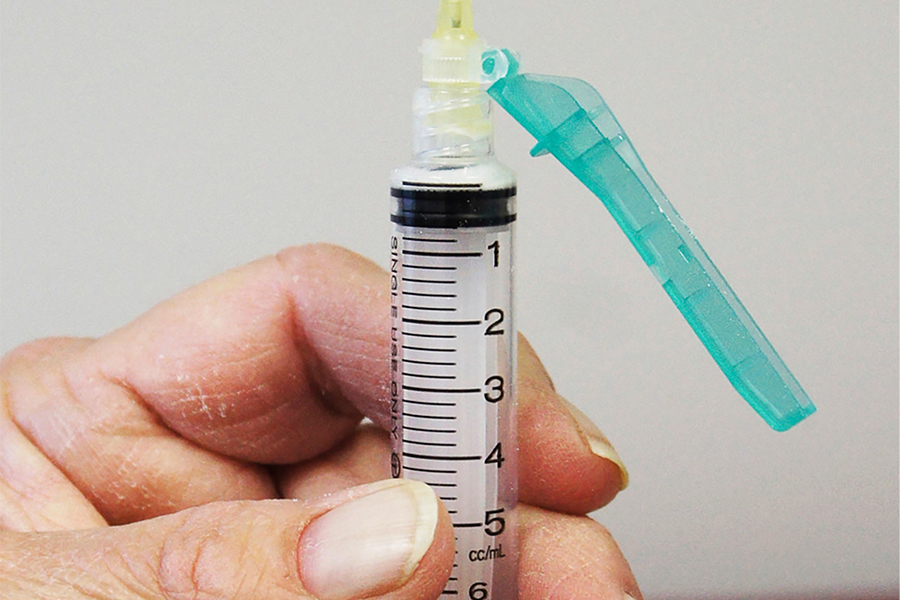 Photo via Carla K. Johnson/AP from “Shot in the Dark“

If there’s such a thing as a too-successful marketing campaign, it looks like the Waltham-based drug company behind one of the hottest drugs in the fight against opioid addiction might have found it. On Monday, Sen. Kamala Harris (D-Calif.) announced that she was opening an investigation into whether Alkermes, the Massachusetts company behind the monthly addiction treatment Vivitrol, had pursued aggressive sales tactics and lobbying to increase the use of its drug over cheaper and more established alternatives.

Vivitrol, a monthly shot that makes it almost impossible for users to get high from opiates, is an increasingly popular tool in the in the effort to fight the opioid crisis, to the extent that sometimes—in jails and drug courts in particular—it’s the only medical treatment on offer. Between 2011 and 2016, sales of Vivitrol grew from $30 million to $209 million.

The company has been relatively open about cultivating a symbiotic relationship with law enforcement, but this summer its sales strategy began to come under scrutiny. The company regularly pitched the drug directly to law enforcement and drug courts, and provided free shots to prisoners as they were being released. It also stands accused of playing on stigmas against more established alternatives like methadone and buprenorphine.

For instance, Alkermes CEO Richard Pops told the New York Times in June that people who opted for methadone and buprenorphine to treat their addiction “aren’t strident about wanting to be drug-free.” In a letter to Pops released by Harris’s office, the senator claims that, “As a result [of these sales efforts], cheaper and more thoroughly studied treatments appear to have been stigmatized and marginalized.”

A recent investigation by Boston Magazine explored how Alkermes pioneered its strategy of working with law enforcement right here in Massachusetts back in 2011, while still struggling to gain a foothold for Vivitrol. The company partnered with the Barnstable County Correctional Facility to provide free shots for inmates who had struggled with opioid addiction as they were being released. Sheriff James Cummings, who runs the facility, has since become an outspoken advocate for the drug, and has traveled around the United States and abroad to champion its use. Currently, 11 of the 12 main sheriff’s offices in the state have programs similar to Barnstable’s.

Earlier investigations by the New York Times, NPR, and ProPublica revealed aggressive outreach efforts to judges, lawmakers, and jails across the country. According to Harris’s letter, Alkermes chief commercial officer, Mark Stejbach, told investors the company’s outreach was meant to “create a gentle federal breeze to kind of sweep behind us—behind our sales really, and help ignite what’s going on individually.” Since 2013, Alkermes has donated $23,000 to Massachusetts politicians and spent hundreds of thousands of dollars on local lobbying. The company has spent $19 million on federal lobbying since the drug was approved in 2010.

On Monday, Harris requested information “related to the sales, marketing, and educational strategies [Alkermes] has employed to promote Vivitrol as a treatment for opioid addiction.” That includes judicial officials and drug courts that the company assigned sales reps to, jails it provided free shots to, information about the “speakers bureau” that advocated for the drug, documents related to its lobbying, and studies about the drug’s effectiveness.

While Vivitrol has become popular, scientific evidence of its effectiveness is slim. The first study directly comparing its effectiveness to buprenorphine, which is sold under the name Suboxone, was published in October, and found that both drugs had a similar degree of success. A more robust study being run by the National Institute of Health is expected to be released soon.

“The severity of this crisis makes effective opioid addiction treatment an important priority, and it is crucial that treatment approaches rest on sound science and the best judgement of medical professionals—not the marketing and lobbying prowess of the pharmaceutical industry,” Harris said in her letter.

The company responded to Harris’s comments in statement that defended its drug as “a disruptive approach that challenges the treatment status quo,” offering patients another option, and criticized the current treatment system as “one-size-fits-all.” The statement asserted that the company has been transparent in its outreach and that the company will “continue to be a strong voice in modernizing and advancing the treatment of opioid addiction, and encourage the examination of the addiction treatment system.”

Harris asked that the information be delivered no later than December .