Her rival John Stefanini has conceded in the historic race. 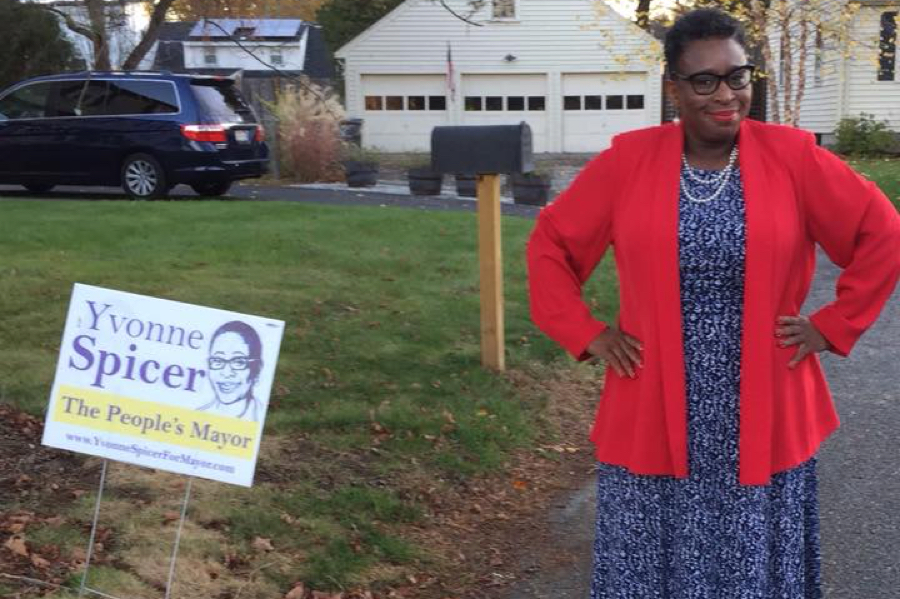 For the first time in its history, Framingham has picked a mayor: Museum of Science education executive and former teacher Yvonne Spicer.

“I am grateful. And I’m humbled and I promise this city that I will do my very best to make sure that everyone has a seat at the table,” Spicer said after receiving a call with congratulations from Stefanini.

Spicer preparing to walk to the steps of Framingham City Hall, interviewed by @TinaAroundTown pic.twitter.com/bFZePLUODD

The community that embraced the label of America’s largest town voted earlier this year to abandon its centuries-old town meeting form of government and become a city, handing over power to an elected city council, school committee, and a mayor.

It almost didn’t happen. A vote on the change in the town of 70,000 came down to just a few dozen votes–so close it needed a recount. Stefanini supported the transition to becoming a city from the beginning; Spicer voted against it.

Things got messy. A flood of candidates sought the position–the most powerful the community has ever seen, and a seat with the largest paycheck of any mayor in the state–including many who had never once run for elective office.

It wasn’t clear from the beginning who would take the historic position. Stefanini, as the candidate with by far the longest and most consistent history in local politics, had been considered an early favorite, and he had an early lead in fundraising.

But Spicer, fueled in part by a scandal that dogged Stefanini’s campaign from the beginning, won the preliminary election decisively, earning 59 percent of the vote to Stefanini’s 29 percent. Stefanini had been caught on security footage in a Framingham library snatching campaign materials for Spicer and wedging a poster behind a trash can. He would apologize for his actions, which he had sought to justify by saying he believed campaigning in public buildings to be off-limits, but Spicer promoted that misstep throughout her campaign. A link to a video of the incident was included in pro-Spicer fliers.

The race was closely watched in the community, which has sought to streamline its governance to leverage its potential as a city along major highways and train stop, which has become a prime target for developers but still has blighted areas in its downtown, is scarred by vacant shopping plazas, has a handful of under-performing schools, and still feels split by Route 9 into a more affluent north and less affluent, less politically powerful south side.

Now, those problems are Spicer’s to solve. “I think together– all of us in Framingham, everyone doing their part–we’ll be just fine and we’ll be able to move forward with great success in our city,” Spicer said.