Voters picked him over Tito Jackson on Tuesday. 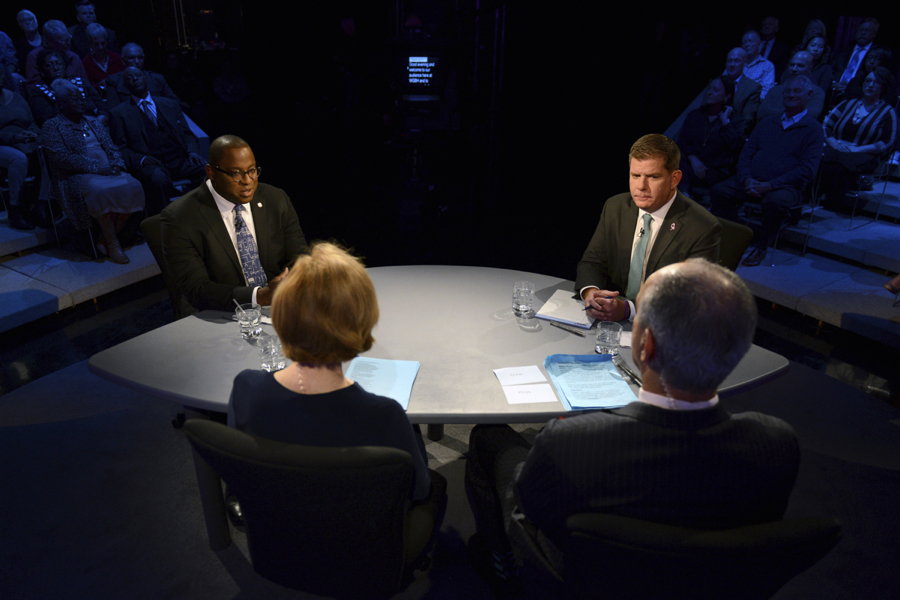 After a lopsided race that nonetheless shed light on some of Boston’s most pressing problems and sparked discussion of the priorities of the city’s mayor, Marty Walsh has been re-elected to a second term.

Walsh, buoyed by incumbency and benefiting politically from the chaos in Washington, fended off a challenge from City Councilor Tito Jackson with 66 percent of the vote.

“Tonight, we commit once again to be a city for all of us, to bring opportunity to everyone,” Walsh told supporters at the Fairmont Copley Plaza Hotel.

It had always been a long-shot for Jackson, who announced his candidacy in January by hammering Walsh for what he said was a focus on big business and flashy projects, and not on Boston’s most disadvantaged. “It is time that we have a mayor who spends as much time in uptown as he does in downtown, who spends more time thinking about and investing in neighborhoods and communities than focusing on City Hall Plaza,” Jackson said at his campaign kickoff in Dudley Square. “It is time that we have a mayor who has a backbone to stand up to business proposals that would ruin our strong financial position, such as Boston 2024 or Indycar.”

Jackson, who would have been Boston’s first black mayor, lagged behind Walsh in poll after poll, and finished a distant second in the September preliminary election. He called for more spending on schools, promised to dismantle the Boston Planning and Development Agency, and, amid chatter about Amazon’s choice for its new headquarters, he pledged that Boston would not use giveaways like big tax incentives to lure companies, the way the Walsh administration did to attract General Electric. He pushed that message until the very end, and vowed to keep pushing it. “I walked in here with my head unbowed,” he said after calling to congratulate the mayor. “I walked in here with pride because this was never about me. It was never about Mayor Walsh. It’s always been about the people of the city of Boston, and their future, and what they need. And it has to be about deconstructing the structures of oppression in the city of Boston that have uplifted some people and kept some people down.”

Thank you Boston.
I love you all.
My congratulations to Mayor Walsh.

Walsh, meanwhile, had reason to be confident heading into Tuesday’s election. He enjoyed a comfortable lead that never dipped below a 30-point advantage, and his campaign war chest dwarfed Jackson’s. He defended his record of accomplishments in his first term, among them a flood of new jobs and progress on a plan to stem the impacts of rising rents with 53,000 new units of housing, 9,000 of them affordable. He rejected many of Jackson’s attacks as unfair or untrue, arguing that funding for schools had actually increased overall under his leadership, and that tax breaks for GE would more than pay for themselves. In the Trump era, he garnered lots of local and national press for his defiance of leadership in Washington–an opportunity not afforded his opponent. And in Boston, a city that almost never unseats an incumbent, it was Walsh’s race to lose.

Officials had expected low voter turnout for the contest. Secretary of State William Galvin predicted fewer than a quarter of Boston voters would take part.

Out in Framingham, soon to be Massachusetts’ newest city, voters selected their first-ever mayor in an historic election: Yvonne Spicer. The educator and executive at Boston’s Museum of Science bested her opponent, John Stefanini, a former state representative and Framingham selectman.

In Lawrence, incumbent Mayor Dan Rivera won a rematch election against William Lantigua, who served as mayor from 2010 to 2014, when Rivera bumped him out of office.

Lawrence Mayor Dan Rivera speaking to his supporters right now. The city has yet to announce results pic.twitter.com/PNid9jY6Ek

Boston City Council candidate Lydia Edwards claimed victory in the race for the seat representing East Boston, Charlestown, and the North End. Her face-off with Stephen Passacantilli was close.

Thank you to all of our supporters who made tonight’s victory in East Boston, Charlestown, and the North End possible. I couldn’t have done this without you. #bospoli

Incumbent at-large Boston City Councilors Michelle Wu, Ayanna Pressley, Michael Flaherty, and Annissa Essaibi George held their seats by a wide margin. One of the challengers, Pat Payaso, who dressed as a clown, got 2.4 percent of the vote.

Fuller Campaign is calling it. Ruthanne’s campaign is saying she won by about 400 votes.#NewtonMA #ElectionDay pic.twitter.com/PjPvb1ie4x