A tripped transmission line left 30 million in the dark on November 9, 1965. 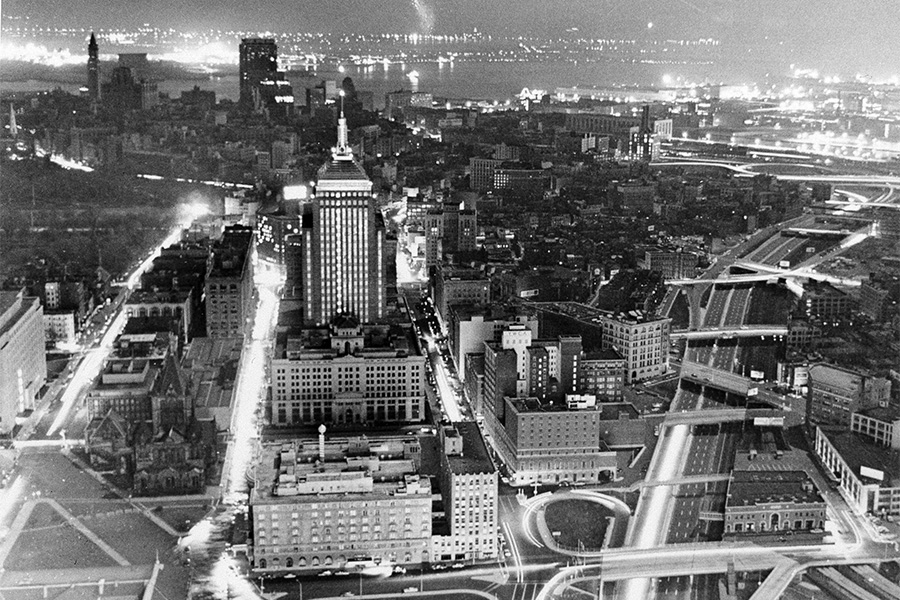 The sporadically-lit view from the Prudential Tower on November 9, 1965. Photo via AP.

Bustling roads, busy streets, and packed train cars. It was rush hour on the evening of November 9, 1965, and everyone had somewhere they need to be. Edwin J. Nellis, 62, sat in the control chair at Con Edison electric company. He was one of many employees in the vast network of providers composing the Northeast Power Grid. It was an average Tuesday, and Con Edison prepared for the evening rush of electric demand. Just after 5 p.m., the dials in front of Nellis started fluctuating. In Boston, lights dimmed or flickered.

Then suddenly, darkness. From Ontario to New Jersey, power lines failed, and 30 million people found themselves living a moment of history: The Great Northeast Blackout.

In an age when everything was just becoming electric, a faulty relay pulled the plug. Businessmen found themselves trapped in elevators, and shoppers were plunged into darkness. TVs switched off, and refrigerators stopped humming. In New York City, 800,000 commuters were trapped in the subway system. Miraculously, Boston’s MBTA continued running for a while longer. When the T stalled near Kenmore, passengers exited the train car and walked out of the tunnel system.

The northeast power grid began around 1950 when local, independent power generators began connecting their networks to better meet the needs of their customers. By aggregating supply when demand is high, the cost of power is kept down and electricity becomes more reliable.

However, the benefit comes with a risk. Generating plants shut down automatically if they are unable to produce the amount of electricity demanded of them. And if one plant shuts down, a cascade effect follows as connected systems become overwhelmed and customers across the power grid are left in the dark.

Manual fail-safes are in place in case of such a scenario—engineers like Edwin Nellis can watch the flow of power and cut their company loose from the grid if necessary, leaving themselves responsible only for their immediate customers. On that evening in 1965, though, no one was on alert for a power failure. The cascade effect had never happened before, and why would it, on a normal Tuesday evening?

A faulty relay near Ontario was the culprit. The relay caused a key transmission line to disconnect, and the Canadian plant shut down, leaving the rest of the grid in a power vacuum. The remaining providers on the grid were overwhelmed, and within a half hour, Ontario, Quebec, New York, New Jersey, Connecticut, Massachusetts, Rhode Island, New Hampshire, Vermont, and northern Pennsylvania were left in darkness. In total, 30 million people across 80,000 square miles were affected.

Municipalities like Holyoke, Taunton, and Peabody were spared—they had their own power plants. Boston, too, avoid total blackout, as buildings like the John Hancock and the South Boston Naval Annex were outfitted with private generators that kept humming.

In most households, fear reigned not because of the darkness, but because of the possible force behind it. It was 1965: The Cold War was on everyone’s mind, and communism was perceived as a constant threat. President Lyndon B. Johnson called all the affected governors and offered full federal assistance. He confirmed with the Pentagon that all defense systems were safe and operating, but not everyone was immediately privy to this information, and ignorance initiated anxiety.

That night, in the light of a nearly-full moon, 10,000 National Guardsmen and 5,000 policemen stood on-call to prevent looting. Encouragingly, there was little criminal reaction to the darkness, and as night melted into morning, the entire northeast returned to its lit-up status quo. But still, the anxiety caused by the Great Northeast Blackout persisted.

Americans were forced to recognize the vulnerability of their power system. Electric companies began taking a closer look at how they evaluate their systems, and regional reliability councils were formed to create industry standards for equipment testing, power reserves, and preventative measures.

For the first time, the modern age of electricity felt defenseless. For all the fail-safes and planning, power outages still occur: Another massive blackout affected 50 million people in August of 2003. Electric power is a luxury—one that we don’t always appreciate until it’s gone.