The famed surgeon, New Yorker writer, and longtime Newtonian on arguing with Malcolm Gladwell and why healthcare in Boston is a decade ahead of everywhere else. —By Emily Kumler 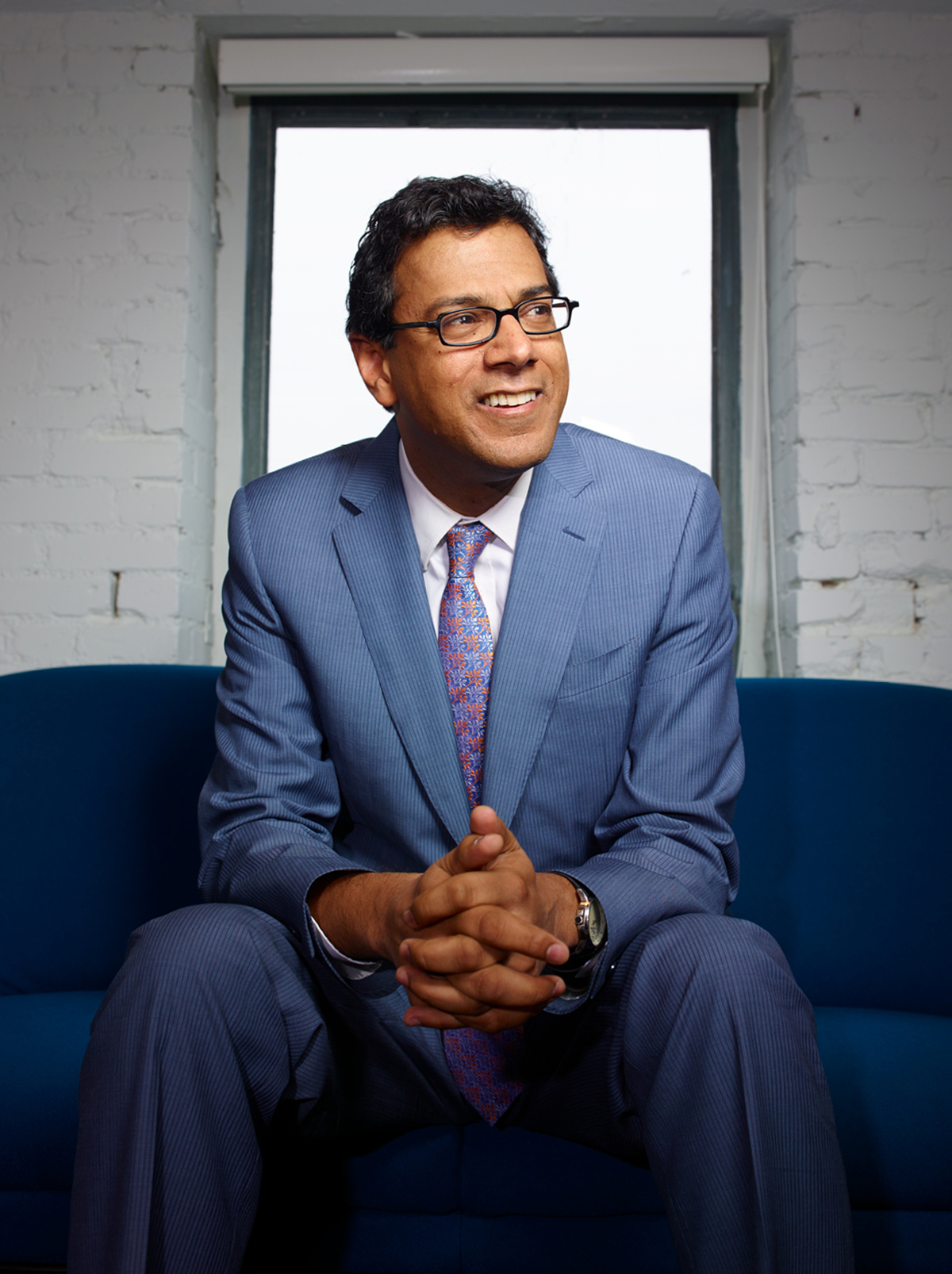 Have you washed your hands today? Atul Gawande has. In fact, depending on the day, he may have scrubbed his mitts a few hundred times. That’s because the best-selling author and acclaimed surgeon knows that simple measures like soap and hot water can dramatically improve medical care. While his solutions may sound like the scolding of a schoolmarm, they pack a punch coming from Gawande—the 52-year-old Harvard Medical School grad and New Yorker writer who has become one of the most influential healthcare voices in the world. Still, as he revealed to me one sunny morning this fall at his office near Fenway, he’s far from satisfied.

You’re a writer and a surgeon. So which do you primarily identify as?

Speaking of writing, you and fellow New Yorker author Malcolm Gladwell were recently in Boston presenting at HUBweek. Are you two buddies outside of work?

Yeah. First of all, we met when we were in college, and I don’t think he’d gotten his first job as a journalist yet, and we became friends I think mainly because we used to argue a lot.

[Laughs.] That’s a great mental picture. What would you argue about?

The very first time we met was at a party, and he comes up to me and he goes, “So what do you think of Indian reservations?” And I could tell he actually didn’t care what answer I gave, because he was just going to eviscerate me whatever the answer was. And the ridiculous thing is, I don’t know anything about Indian reservations and I still bit. I went ahead and got in the argument, and that was how we met.

Has he helped you as a writer?

He persuaded me to write. He and Jacob Weisberg, who was starting an Internet magazine [Slate] in 1996, persuaded me to write a column. We’d call it a blog now, but we didn’t even know what to call it then. This was ’96, the Netscape Navigator days. And then, about two years later, Malcolm persuaded me to send in a proposal to the New Yorker, which they then accepted, and I was off to the races. And Malcolm has been my best fan ever. The friendship has sort of developed out of arguing about ideas, and now he’s one of a handful of people I talk to regularly about what I’m trying to do in my career.

You were a National Book Award finalist for the very first book you wrote, Complications: A Surgeon’s Notes on an Imperfect Science. How did that feel?

I remember when I got that call. I was about to go into an operation as a resident. The operation lasted 13 hours, and no one was interested in hearing about this award. A lot of the time I was standing there, holding a retractor for the surgeon and realizing that writing, this thing I was doing on the side, couldn’t just be a hobby anymore. I needed to make it part of what I do and make it equally what I do. But that was the beginning, not the end point. I had to figure out if I could do it again—do I have a second book, do I have a third book, do I have the 60th article that’s worth reading?

Your parents were both doctors, so was it assumed you’d follow in their footsteps?

Yeah. It’s almost a given that the children of two Indian immigrant doctors are expected to be doctors themselves. My sister, who went to law school, felt like she had to hide the fact that she had chosen to do law, that she was prelaw and not doing all of the premed stuff, because of the feeling like, “Oh my gosh, it’s going to be a disappointment.” In many ways, I spent a lot of time trying to escape that. I took a degree in political science alongside my biology major, and then, when I went to Oxford, I studied politics and philosophy and I worked in politics. All of that was out of some effort to escape the fate that I had been expected to follow. But it turned out that it suits me.

Do patients ever get excited that you are going to be their surgeon and ask you to sign books?

Absolutely. And I thought that was the most bizarre thing. I would meet people who had read my first book, Complications, which is all about all of the mistakes that I made, and they’d come in and say, “Oh, I read your book.” And I’d be like, “Oh good, so you learned that my one expertise is in having complications.” And then they’d have me sign the book. And I’d be like, “All right, but we’re going into surgery anyway.”

How many times a day do you wash your hands?

What about on a regular day—do you wash your hands after going to the bathroom?

You do? I think a lot of people don’t.

Well, there’s a great study about this. They did this in airport bathrooms, and I’m going to get it slightly wrong, but what I remember is that when people go to the bathroom and there’s no one else there when they come out of the stall, they only wash their hands about 40 percent of the time. If there’s one other person around, the likelihood that they wash their hands doubles.

Charlie Munger, Warren Buffet’s right-hand man, once sent you a personal check for $20,000 because he liked your article about reducing healthcare costs. Did you two know each other beforehand?

No, never met him. And I said, “Thank you, I love that you loved the article, but I can’t take the money. You can donate it to our public health research.” And he wrote me back another check for the public health research and still gave me the first check, saying, “You do whatever you goddamn please, but I gave you the check.” So I deposited it in the research fund, which was poetic.

How much was the second check for?

Where’s your favorite place to have dinner in Boston?

Right now, I would say I’m in love with Porto, Jody Adams’s place in the Back Bay, and I’m still blown away by O Ya, the Japanese place that costs a minor fortune.

Your most recent book, Being Mortal, looks at what it means to die in the 21st century. Were there things you learned while writing it that you wish you’d known earlier?

I think the thing that emerged was that, in the end, understanding mortality was not actually about dying or about having a good death. It’s about how you have a good life all the way to the very end. As I read more and talked to more people, I realized that this incredibly scary subject of dying isn’t so scary after all because it’s really about living. It’s incredibly inspiring and cool. For me, the lesson was that people have priorities in their life besides just wanting to live longer. And to know what people’s priorities are, you have to ask them. And we don’t ask.

Can you tell me about the patient with Alzheimer’s disease in the book? That story really stuck with me.

There was an 85-year-old patient with Alzheimer’s that I met who had a medically ordered puréed-food-only diet and was caught eating cookies. They would take her cookies away and write her up. She’d get in trouble and you just wanted to say, “Let her have the damn cookies,” because at this point she’s expressing what her only joy is. Well-being is larger than being healthy. Health and safety are only one component of what it means to be living a good life all the way to the end, and we have been totally incurious—as a society and in medicine—about what those things are that a person wants. If someone wants to take their grandchild to Disney World, but that doesn’t fit with their chemotherapy schedule—well, we need to make it so that it does fit and they can actually do it, right? If that person doesn’t go to Disney, that would be one of their regrets in life.

Switching gears to something a little lighter: You’re a pretty popular guy on Twitter. What’s your approach? Do you ever feel like social media gets too crazy and you just need to walk away from it?

Why did you pick Boston as the home base for Ariadne Labs, your research group?

I think that in the same way Kendall Square became the home of the biotech revolution, Boston is innovating how our health systems work. Whether it’s putting coaches in our operating rooms, or using checklists or additional technologies in ways that actually make people’s care better, Boston has the mix of scientific professions. We’re a decade ahead of the rest of the country in having universal health coverage, and we have amazing institutions and lots of young people who want to make their career in healthcare.

Your TED Talk has been viewed more than one million times, your books are bestsellers, you were a Rhodes Scholar and a MacArthur genius grant recipient. So, what have you failed at?

Oh my God, so many things. I did a master’s degree in philosophy thinking that I was going to go on to do a PhD, but I was terrible at philosophy. I could barely understand the questions, let alone offer anything in the way of answers. I also had a rock band.

What was the band called?

Oh, it took on so many different permutations. One of the names it had was Thousands of Breaded Shrimp. And I wrote not-very-good songs, pining for my girlfriend—who I’m now married to—when I was living in another country at the time. And so that didn’t work very well. Well I mean the songs didn’t work—she stayed with me—but the songs were terrible, so that came to an end.

Your wife, Kathleen Hobson, is an editor. Has she helped your creative side flourish?

Yeah, she was crucial. When we met, I had almost no background reading very much, and she was a literature major who opened up a whole library to me. If I had to bet who was going to be the writer, it would have been Kathleen. She became an editor, and then when I started writing, she was always the first reader and the one to give me feedback along the way. For our marriage to survive, we’ve had to work out that maybe she won’t be the first reader, because I’m not great at always taking her advice. But she’s still the person that I talk through all of the key ideas with.

Given all that you have accomplished, when will you feel like you’ve made it?

God, I don’t know. Maybe in posterity? If I could leave eight to 10 books that have cumulative value, that would be an important part of what I do. Writing isn’t the only thing, though. I also want to leave a few thousand patients who are better off in the world. And I’d like to see if we could generate more of these kinds of systems solutions that make the healthcare system genuinely better. That would add up to me. Then maybe I’ll have made it.