Oh No: Dunkin’ Donuts Is Opening a “Dunkin” Store in Boston

The single-named entity is opening in December on Tremont Street next to Boston Common. 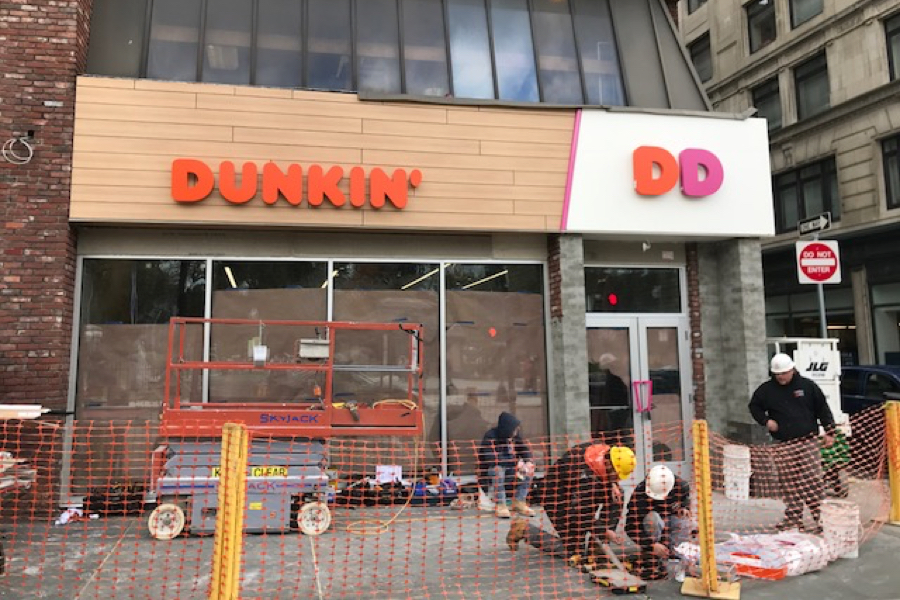 It is with a heavy heart that I deliver this news.

Dunkin’ Donuts, we’ve learned, has brought its troubling experiment in re-branding as “Dunkin'” from the disruptive shores of California to the parochial heart of iced coffee country. The global chain, headquartered in Canton, will debut a “Dunkin'” store at its new location on Tremont Street next to Boston Common, which is scheduled to open in December. The new signage was unveiled this morning in all of its disyllabic horror.

Look at it just hanging there. An unfinished thought. A lonely gerund. A John Oates solo tour of a logo. Dunkin’.

The company, which is apparently going through some kind of identity crisis, announced in August it would drop “Donuts” from the signage at a new store in Pasadena, testing the waters for a possible nationwide “Donuts”-scrapping overhaul. Others have been planned around the country, including one slated to open in Quincy. Which has raised a number of important questions, like: Does anyone even dunk their donuts anymore? And: What the hell?

It has apparently decided to give the concept a shot in downtown Boston, a place perhaps most primed to hate it. We’ll see. A quick scan of social media on Wednesday afternoon did not turn up any signs of outrage from Bostonians, though perhaps the normally quick-to-rage social mediasphere has assumed the sign is simply unfinished.

Dunkin’ Donuts says the Boston and Quincy locations will be the only ones to get the pointlessly sleeker name in the region, but the future appears very much up in the air, and we could see some big changes by the end of next year. “Dunkin’ Donuts does not anticipate any additional Boston area or New England Dunkin’ Donuts locations participating in this test,” it says via a spokeswoman, “nor does the company plan to make any decisions regarding its branding until the latter half of 2018 when it begins rolling out its new store image.”

Then, I fear, the Donut Rapture begins.

This post has been updated to reflect that Dunkin’ Donuts is headquartered, but was not founded, in Canton. It was founded in Quincy.