Oliver Curme said he didn't want "undesirable elements" near his mansion. He now says he was joking. 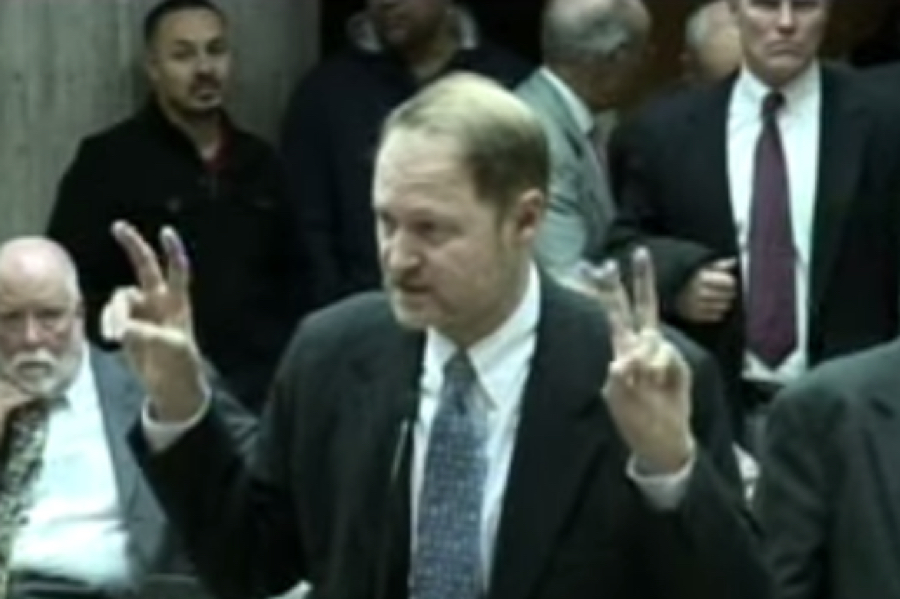 A Boston millionaire was apparently just messing with everyone when he strolled into City Hall on Tuesday night and offended the entire world.

Back Bay resident Oliver Curme showed up at a Tuesday hearing about a proposed medical marijuana dispensary on Newbury Street with some outlandish things to say about the “undesirable elements” it might bring to his swanky neighborhood.

While various neighbors got up to speak before the city’s Zoning Board of Appeals in favor of or in opposition to the proposal—concerns about traffic, the benefits of marijuana as a treatment for opioid addiction—Curme kicked things up a notch.

A retired venture capitalist who said he lives in the lavish Burrage Mansion, Curme said he wanted to make it abundantly clear the kind of undesriables he was referring to, and what followed may go down as one of the most spectacularly, preposterously offensive speeches in the history of City Hall. It has since been shared widely online, sparked outrage, and raised about a million questions, mainly: Who is this guy? Can he possibly be for real?

In less than a minute of testimony, first reported by Universal Hub, Curme mocked veterans with PTSD (“just give me a break, they can get over it”), women with breast cancer (“they all have that cadaverous look and they wear those ridiculous turbans”), and people with disabilities (to make his point, he contorted his body to mimic symptoms of multiple sclerosis). “For goodness sake,” he said. “Newbury Street is a high-end shopping district. We don’t want people like that scaring off the clientele.”

He also seemed to mock the concept of the shop altogether, deploying malicious air quotes when he used the word “dispensary.”

In video of the meeting, expressions of shock can be seen on the crowd, and officials can be heard interrupting Curme’s speech, trying to keep him on the topic of zoning. Then, the video shows, he wrapped up and took a seat. The Zoning Board of Appeals ultimately approved the dispensary.

You really have to see it to believe it. A transcript:

My name is Oliver Curme. I live in the Burrage Mansion right around the corner from this proposed ‘dispensary.’ All my friends and I are against this because it will bring undesirable elements into the neighborhood. Just so you know what I mean, there are Army vets with PTSD, and we don’t want them in the neighborhood. Just give me a break, they can get over it. The second thing is people in wheelchairs with MS or whatever.

I think the third one is women with breast cancer. They all have that cadaverous look, and they wear those ridiculous turbans. For goodness sake, Newbury Street is a high-end shopping district. We don’t want people like that scaring off the clientele.

It was so many outlandish statements, at such a rapid pace, that it wasn’t immediately clear if he might somehow be joking. Could he be acting? A marijuana advocate, maybe, masquerading as a marijuana opponent to discredit his anti-dispensary neighbors? There was no sign from Curme that he was being anything but sincere.

And then, by Thursday morning, we had an answer. NBC Boston reached Curme at his home, and he revealed it was all an act, and that he actually is in favor of the dispensary.

“The point that I was trying to make is a marijuana dispensary will bring in the people who really need this, people who are sick, people who have cancer, and this is the only choice for them,” he told the news station. “If you listen to what I said it was so over the top that I think it’s the only way [my comments] could have been construed.”

That is, of course, not how it was construed.

Tweets about the incident from a Boston Globe reporter were shared widely, including by political commentator Keith Olbermann. Bostonians online appear to be pissed. “I am HORRIFIED,” reads a post on the Facebook page of the group Allston Brighton Veterans. “The real life Mr. Burns was at a Newbury Street medical marijuana dispensary hearing yesterday,” reads a post on Reddit.

This must-watch let-them-ear-cake outrage is NOT a plant. It’s, to quote coverage, “Oliver Curme, a retired venture capitalist…who opposed the proposed dispensary because of the icky people he said would patronize it” https://t.co/Y6ZzYJ7byN

Curme, who goes by “Ollie,” was once a general partner at the Boston firm Battery Ventures, according to Bloomberg and the online listing CrunchBase. According to a biography on a site called the Education Forum, Curme retired in 2005. He has a biochemistry degree from Brown and an MBA from Harvard, the biography says. City records show that the two units under his name in the Burrage Mansion are worth a combined $6.2 million.

He is also, it appears, a convincing actor, if not a particularly good comedian.