Has Newbury Street Lost Its Cool?

When an iconic thoroughfare known for sophisticated shopping starts to resemble a confused strip mall, who’s to blame? 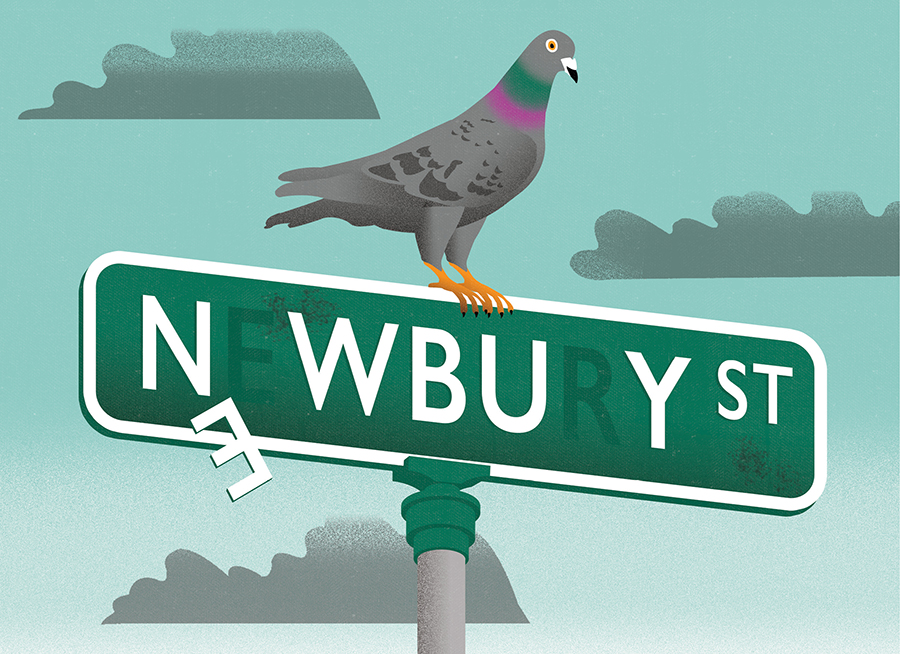 I was somewhere along Newbury Street, hunting for holiday gifts, when my anxiety began to kick in. There were the usual culprits—double-parked SUVs, snarling traffic, and sidewalks jammed with wayward tourists and stressed-out locals—that often make Boston’s most famous shopping mecca feel more like a fire-sale flea market than a mini Bond Street or Rodeo Drive. But as I browsed my way down the mile-long strip, I encountered a more troubling trend: Newbury appears to be losing its cool.

For years, the street seamlessly blended high-end fashion—Chanel, Valentino, and Marc Jacobs—with counterculture hip (remember Allston Beat and the original Newbury Comics?). Yet as I jostled past TJ Maxx, Forever 21, and a bevy of dime-a-dozen stores, not to mention a surprising number of empty storefronts (vacancy rates reportedly hover around 10 percent), Newbury looked in dire need of a retail makeover. After all, Copley Place and the Prudential Center have undergone face-lifts and emerged rejuvenated. Iconic fashion label Saint Laurent, for instance, selected Copley for its first-ever Boston boutique, where it’ll join Dior and Christian Louboutin. The Pru, meanwhile, has blossomed into a full-blown destination where shoppers can polish off a bottle of lambrusco at Eataly and then find a gift for their picky mother-in-law.

As every savvy shopper knows, the world’s greatest cities—New York, Paris, Tokyo, even Chicago and Miami Beach—have a booming retail nerve center that sets them apart. Stroll down Fifth Avenue or Lincoln Road, and there’s no mistaking one for the other. Nowadays, first-class shopping is as much a part of a town’s DNA as its sports teams and art galleries. So what does it say about Boston that its premier locale is a mall (albeit a fantastic one)?

To reclaim its rightful place, though, Newbury faces several hurdles. Unlike Copley and the Pru, Newbury isn’t owned by a single entity with a unified vision. Developers, real estate investment trusts, and your coworker’s girlfriend’s uncle who’s rumored to have bought a building for, like, 20 bucks in the ’70s each own a piece of the strip. And, understandably, they want top dollar from retailers hoping to cash in on Newbury’s unending foot traffic. In turn, smaller, less-established brands have a hard time getting a toehold, while behemoths such as Nordstrom Rack or TJ Maxx stake out prime real estate, explains Whitney Gallivan, managing director and partner at Boston Realty Advisors, who is working with a management company that owns 28 properties on Newbury. Moving forward, Gallivan says, the street’s future depends on landing brands that will grab shoppers’ attention. “We’re willing to make deals,” she tells me, “that will work for a tenant who will create that right amount of buzz.”

Stylish shops, however, will take Newbury only so far. The lack of parking and a dearth of trendy eateries are also critical parts of the puzzle. “There are plenty of restaurants along Newbury,” Gallivan says, “but there hasn’t been the type that you would find in the South End or Cambridge—the places that people are going out of their way for.”

Not everyone, though, shares Gallivan’s desire to fill the void. The Neighborhood Association of the Back Bay, for instance, a 61-year-old organization that wields considerable influence, has been accused of blocking new restaurants. Chairwoman Vicki Smith dismisses the allegations, but admits she’s not keen to simply roll out the welcome mat, either. “We have no problem with all of the restaurants on the south side of Newbury Street,” she says. “Our concern is with those restaurants that abut Commonwealth Avenue and share an alleyway with residents.”

Despite Newbury’s current shortcomings, it remains a critical part of Boston’s identity, and its stores shape how our city looks to the rest of the world. There’s little doubt that a sophisticated Newbury is good for us all. So while it took some searching and elbowing, by the end of my recent shopping excursion I’d bought beauty products at Credo and a bag at DeWolfe Leather Goods. Still, before heading home, I popped over to Copley—just to make sure I hadn’t missed anything.