The early morning blaze happened on a busy street that includes Trattoria Il Panino, Ristorante Saraceno, and the Connah Store. 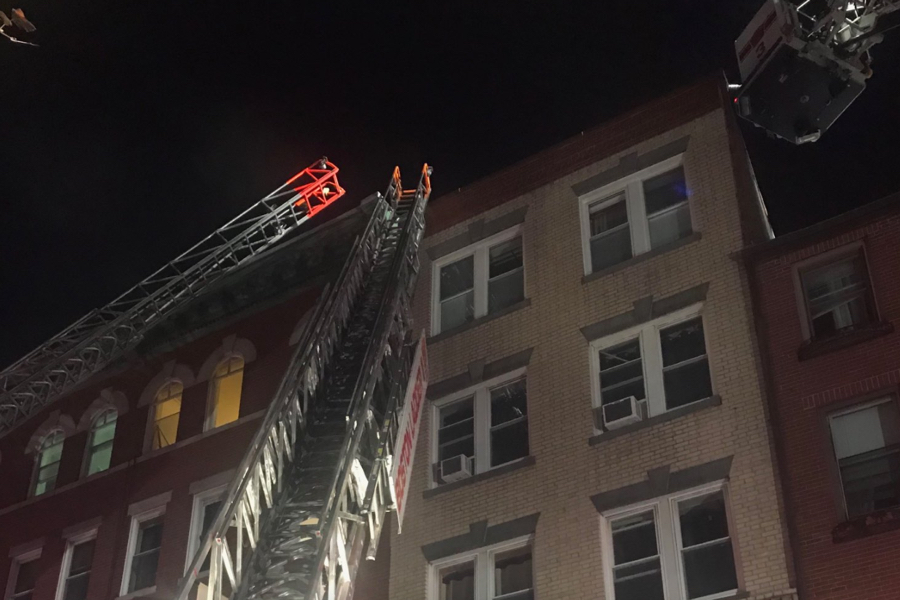 A North End fire killed two and injured three in the early hours of Wednesday morning, ripping through a building on Hanover Street.

The three-alarm blaze, the city’s first and only fatal fire of the year, was first reported at about 1 a.m. on the third floor of a five story building, and was caused by improper disposal of smoking materials on the second floor, fire officials said.

One man fell to his death, and another man was found dead inside the building, officials said.

Two adults and one child were taken to the hospital with injuries. Twelve people were displaced, the fire department said. The fire caused an estimated $1.5 million in damage.

Ladder 18 on Parmenter St. 2 adults and an infant were taken down over this ladder. pic.twitter.com/8hklEkHOKR

An investigation is underway, the Boston Fire Department wrote on Twitter. “As is standard procedure on fire fatalities, a joint investigation will be conducted by Boston Fire Investigators, the Boston Police Homicide Unit and Suffolk County District Attorneys Office. Cause of death will be determined by State Medical Examiner’s Office.”

It was not immediately clear how restaurants and stores on the neighborhood’s busy street were impacted. Located nearby are Trattoria Il Panino, Ristorante Saraceno, and the Connah Store.

“This is no way to start the holiday season,” Trattoria Il Panino owner Frank DePasquale says in a statement. He says the restaurant was not damaged but will stay closed for now. “Our hearts go out to the victims and their families who had to encounter this tragedy during the holiday season. We are grateful that our staff is all safe and accounted for, but we hurt for our two neighbors and friends who perished.”

DePasquale has put up some impacted neighbors at a hotel he owns, called Bricco Suites, and plans to organize a fundraiser of some kind at his restaurants. “The North End is a special place full of special people,” he says. “This news saddens us to our core as we are a proud part of the community.”