Our rambling president sparked outrage when he was supposed to honor World War II "code talkers" at the White House. 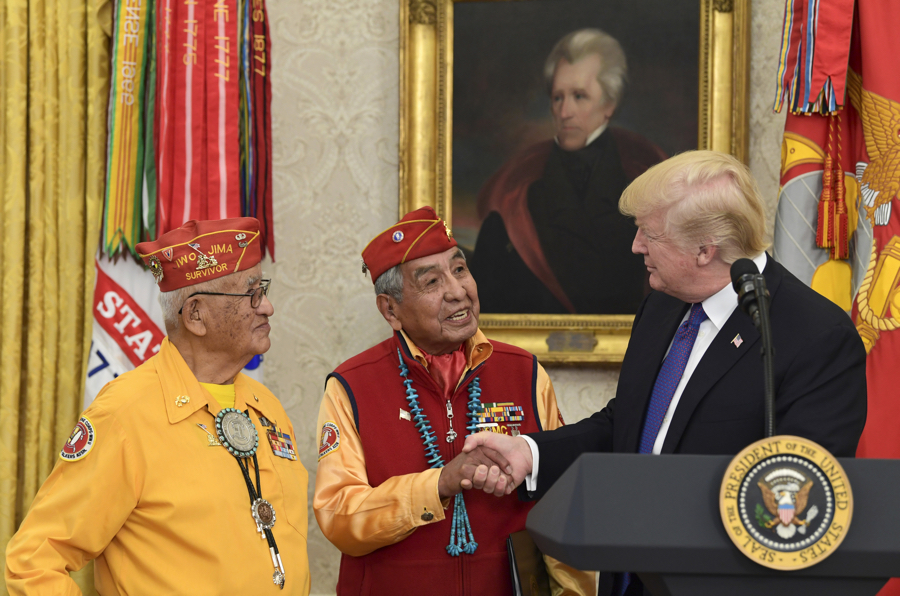 He had been speaking to a small group of Navajo “code talkers” to thank them for their service in World War II. The “code talkers” helped the Allies transmit coded messages in battle using tribal languages. “You’re very, very special people,” he told them.

That’s when he went off on this little tangent: “You were here long before any of us were here, although we have a representative in Congress who they say was here a long time ago. They call her ‘Pocahontas,'” he said, grinning and tapping the veteran on the shoulder. “But you know what? I like you. Because you’re special.”

He was also (because, why not?) standing in front of a portrait of Andrew “Indian Killer” Jackson, who signed the Indian Removal Act that triggered the Trail of Tears. And he appeared to make a joke about his Chief of Staff John Kelly, the emphasis on “chief.”

2. He did it in front of a portrait of Andrew Jackson, who kicked off the Trail of Tears with the Indian Removal Actpic.twitter.com/7KmbiYq0Vt

Trump, as he did repeatedly on the campaign trail, was mocking the Senator’s long ago claim to Native American ancestry in a law directory. There is little evidence as to whether that’s true, but Warren has cited “family stories” as her reason for identifying as such. Her political opponents accuse her of lying to help her career. The issue was a hit for Trump in 2016, and it elicited a lot of cheers and war whoops from his supporters at rallies whenever he brought it up, especially when he used the nickname referencing the Native American historical figure.

He continues to mention it, with some frequency, as Commander in Chief.

Warren, in an interview with MSNBC, said she considered the insult “a racial slur.”

“This was supposed to be an event to honor heroes, people who put it all on the line for our country, who, because of their incredible work, saved the lives of countless Americans and our allies,” Warren said. “It is deeply unfortunate that the president of the United States cannot even make it through a ceremony honoring these heroes without having to throw out a racial slur.”

Speaking with NBC, John Norwood, of the Alliance of Colonial Era Tribes, condemned Trump’s use of “Pocahontas,” calling it “insulting to all American Indians” and adding that it “smacks of racism.”

Trump has a long and well-documented history of racially charged disputes with Native groups, including during his days in the gambling business competing with casinos run by tribes. At the time, he accused his rivals of being allied with the mob and of faking their heritage. “I think I might have more Indian blood than a lot of the so-called Indians that are trying to open up the reservations,” he said in 1993.

Amid outrage over today’s comments, Trump spokeswoman Sarah Huckabee Sanders defended Trump’s remarks, calling the notion that the word he used is a slur “ridiculous” and adding, “I think what people find most offensive is Senator Warren lying about her heritage to advance her career.”

Sanders on Trump’s ‘Pocahontas’ comment: “What most people find offensive is senator Warner lying about her heritage to advance her career”; says it’s a “ridiculous response” to see Trump’s remark as a racial slur. (via ABC) pic.twitter.com/gXyjgHsn1T