No, a Christmas Display at the Square One Mall Does Not Say “Satan”

A photo of what looked like a cheerful altar to the Devil was a fake.

You better watch out.

You better not cry.

You better not pout.

I’m telling you why.

Satan is coming to Saugus.

Or at least that was the anti-Christmas message that greeted shoppers at the Square One Mall this week, according to a widely shared photo from Tuesday night.

In the picture, five letters could be seen spelling out the name “SATAN” on large wooden blocks stacked on red-and-white striped polls—part of a cheery holiday scene on the shopping center’s lower floor, behind the area where children can take photos with a mall Santa. A Christmas-y altar to Beelzebub, it looked like.

“I’ve long suspected that God abandoned this mall,” the tweet’s author, identified only as “Cody,” wrote. “Apparently whoever decorated this year feels the same way.” Cody didn’t name the mall, but viewers quickly identified it.

Was it some kind of mix-up? A joke, courtesy of a vandal or disgruntled employee? The work of the Devil himself?

It was none of those things. By Wednesday afternoon, after the tweet had been shared dozens of times, written about in Barstool Sports, and attracted the attention of a Boston reporter, the truth came out: It was a fake.

“This image is of Square One Mall that has unfortunately been altered in Photoshop,” said Mike Connell, the mall’s general manager, in an email. “This messaging would never be allowed on a Simon mall or a Simon Santa set. We offer holiday programs where families look forward to capturing magical memories each year.”

A spokeswoman for the mall also provided a photo of the real display, in which the blocks spell out the name “Santa.” 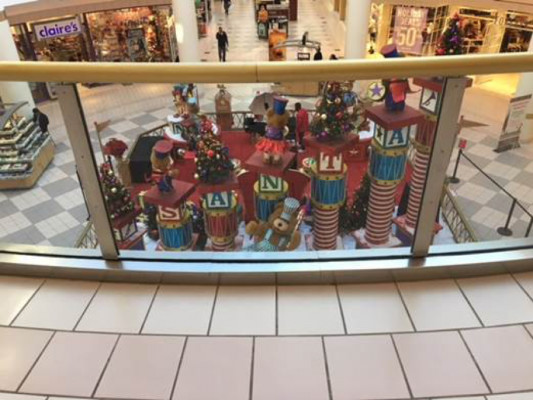 The Twitter user behind the hoax has also fessed up: “Soooooo at what point do I tell everyone that I photoshopped that picture?” he wrote. He apologized, showing off his Photoshopping skills once more (this time, the blocks spelled out “Pepsi”): “I’m sorry to everyone who was fooled by my dumb little joke.”

Soooooo at what point do I tell everyone that I photoshopped that picture?

I’m sorry to everyone who was fooled by my dumb little joke. Here’s the real unaltered image pic.twitter.com/cY4esHr8Jw

So rest easy. Christmas hasn’t been hijacked by the Prince of Darkness after all.