They changed the protest's name because it "reminds people of genocide." 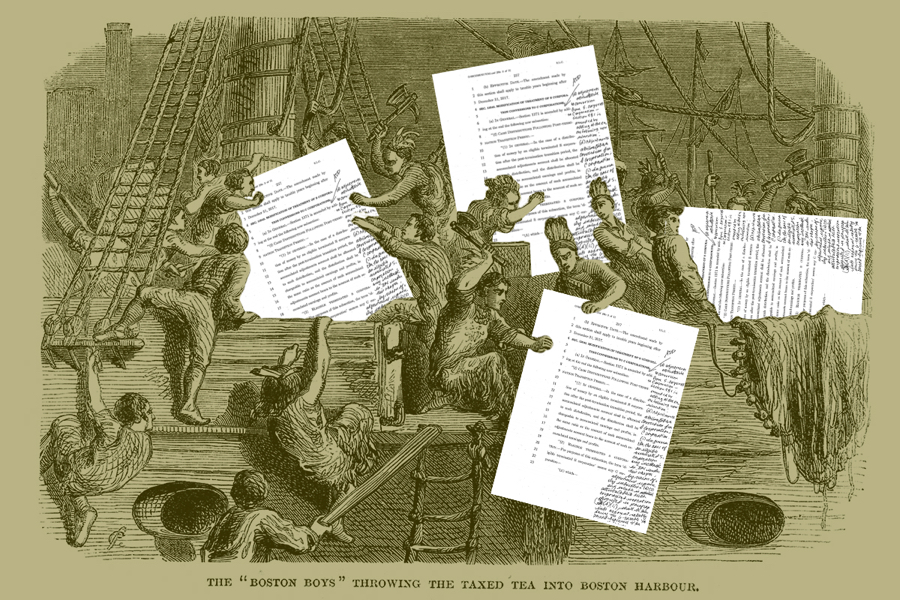 Update: Looks like there’s been a change of plans. Protest organizer Martin Angus Hamilton announced on Facebook after the publication of this story that the protest has been renamed, and that they are distancing themselves from the historic Tea Party entirely.

“After discussion and feedback, we have decided to change the theme of the event,” Hamilton wrote. “Thank you for your understanding.” The decision comes after talk on the event’s Facebook page about the complicated legacy of the Founding Fathers, and the decision made by some 1773 Tea Party participants to dress as Native Americans.

“We originally went with Boston Tea Party because it reminds people of taxation without representation, but it also reminds people of genocide,” co-organizer Ben Thompson said in an interview, adding that they have not heard from any organized indigenous groups, but from some individual people who brought concerns to their attention. “We wanted our event to be something that all people could feel safe and comfortable going to. So we felt like we had to make that change.”

Earlier: Back in 1773, just before one of the best-known protests in American history, colonists fumed over a tax policy concocted by a hostile force, against the will of taxpayers, that funneled wealth from those taxpayers to a coterie of wealthy insiders at the top.

It does to four friends from Boston, who say that as the so-called Tax Cuts and Jobs Act of 2017 winds its way through Congress, “taxation without representation” has returned, and that the time has arrived for Boston to reclaim the imagery of the Boston Tea Party, once and for all.

“The Tea Party was about a lot of things, but a lot of people think about how it represented taxation without representation—a government that was taxing people but not representing them. And we think a similar situation is occurring now,” says Ben Thompson, a 27-year-old BU grad student.

He’s among organizers of a history-inspired protest to “Dump the GOP Tax Bill” on Sunday, December 10. “The government isn’t representing the 3 out of 4 Americans who oppose this bill, and instead the GOP bill wants to raise taxes on millions of low-income Americans while slashing taxes for multinational corporations and the wealthy, and Donald Trump.”

Specifics are still not finalized, and they’re collaborating with other groups to find speakers to feature, but organizers say they plan to rally at Boston Common and then march. They aren’t sure where the march will go, or whether they might end up somewhere near the approximate site of the original Tea Party, which is marked by a museum off the Congress Street Bridge in the Fort Point Channel. He said he also thought the protest would have a “street theater” component to it that would link modern day events to the struggle in Boston 250 years ago that marked a major turning point on the march to independence from England.

In two days, it’s already drawn a lot of attention, with nearly 500 saying on Facebook they would attend and more than 6,000 indicating they were interested.

Which has made Thompson and his three other co-organizers think they might be on to something. Maybe Tea Party protests could spread beyond the city where it all happened into other states, he says. Maybe it’s time to reclaim the “Tea Party” branding, hijacked in the Obama era by a movement of reactionary conservatives, once and for all. The Tea Party Movement that sprung up after Obama’s election, he says, “was funded by rich elites who aren’t from Boston or Massachusetts, and we’re largely from Boston and Massachusetts. We’re not funded by anyone. And we want the government to represent the people.”

There isn’t a perfect apples-to-apples comparison to be made between the modern U.S. and the British colonies of the 18th Century, obviously. Technically speaking, we do have representation in Congress. And in Massachusetts, our state is represented by an entirely Democrat delegation, all of whom have voted against the Trump tax plan. But nationally, Thompson says, lack of representation is how we’ve gotten ourselves in the mess that this appears to be (especially for states like Massachusetts).

Think about it, he says. Thanks to the Electoral College, a majority of Americans voted against Trump, but he’s still the president. The scourge of gerrymandering has contorted the results of federal and local elections around the country. According to the latest polling, Americans are overwhelmingly opposed to this tax proposal, and it still seems likely to pass.

Taxation. No representation. So it’s time to dump some metaphorical tea.

There are other differences between the Tea Partiers of 1773, and the rally this weekend, and the organizers are quick to draw distinctions between themselves and their historic forbears. For one, they have urged demonstrators not to wear any Native American costumes or headdresses, as the colonists did that infamous night in December.

“There will be absolutely no tolerance for any person attending this event in offensive or appropriative garb,” reads a note on the Facebook event page from organizer Martin Angus Hamilton, which includes a pledge that the event will be “respectful towards the Native people whose stolen land we stand on, and the Indigenous people who live in America today.”

Hamilton also sought to distance the protest from its anti-tax roots, and from the darker side of the Founding Fathers, and is not pulling punches about the historic figures’ complicated legacy. “When the founders demanded ‘no taxation without representation,’ they demanded inclusion of white, wealthy men. That is not sufficient. We demand a governance system that is just for all, regardless of citizenship status or income level. Anti-tax attitudes during the founding of the US, which played into the original Boston tea party, were based on the desires of the elite to protect their wealth, which was most often built on slavery.”

They also haven’t done their masterminding at a Boston tavern, the way the historians believe the Sons of Liberty huddled at the Green Dragon to plot their tea-dumping. But Thompson says they’re open to it.

“Maybe we’ll have our next meeting there,” Thompson says.