The social media reaction to the Globe's article was strong, to say the least.

The Boston Globe published a story on Friday at around 6 p.m. detailing an incident of sexual harassment that had occurred at the Globe itself, involving a staffer who was then “pressured into resigning after additional accusations emerged from outside the company.” The Globe declined to release the person’s name, and discussed the broader way various industries are grappling with sexual harassment issues.

Speculation about possible harassment issues at the Globe reached a fever pitch Friday morning, when radio show Kirk and Callahan addressed the topic on air.

When the story finally dropped, public reaction came quickly, and the writer bylined on the piece, Mark Arsenault, began retweeting responses on Twitter. 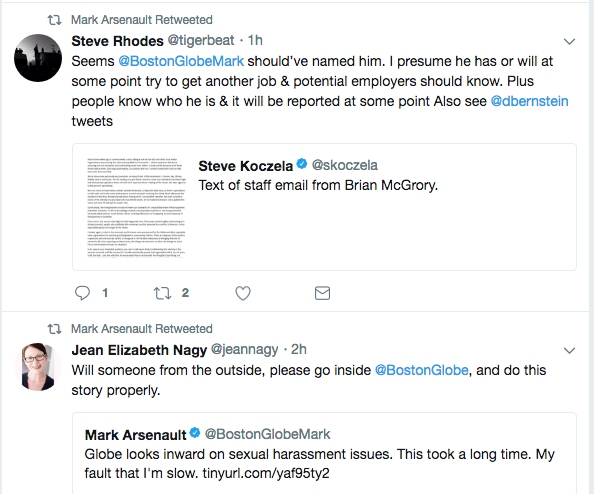 The reaction on the rest of Twitter was no less strong.

Bad, diffident reporting. The reporter carries on with trifling generalities, almost as if pressured from higher ups, and rambles for a gobsmacking sum of paragraphs before (sorta) getting to the crux of the story, but not really. Pretty damn egregious, @BostonGlobeMark. https://t.co/OEbd7nwdmk

The *extremely* buried lede of this Boston Globe article on sexual harsssment at their paper https://t.co/jnQdysCr15 pic.twitter.com/rDS5a3vjnU

The Globe’s details of the allegations against its ousted reporter are in paragraph 12… of a story put on-line late on a Friday afternoon. https://t.co/PzdU6Qw2aR

This Globe story is horrifyingly awful. So tone deaf, so arrogant. A shocking fuck you to the readers. Amazingly out of touch. https://t.co/vHGnw5Lza3