Massachusetts Dems Are Gleeful Over Doug Jones’ Victory in Alabama

Jones' unlikely win over Roy Moore is cause for celebration in the Bay State. 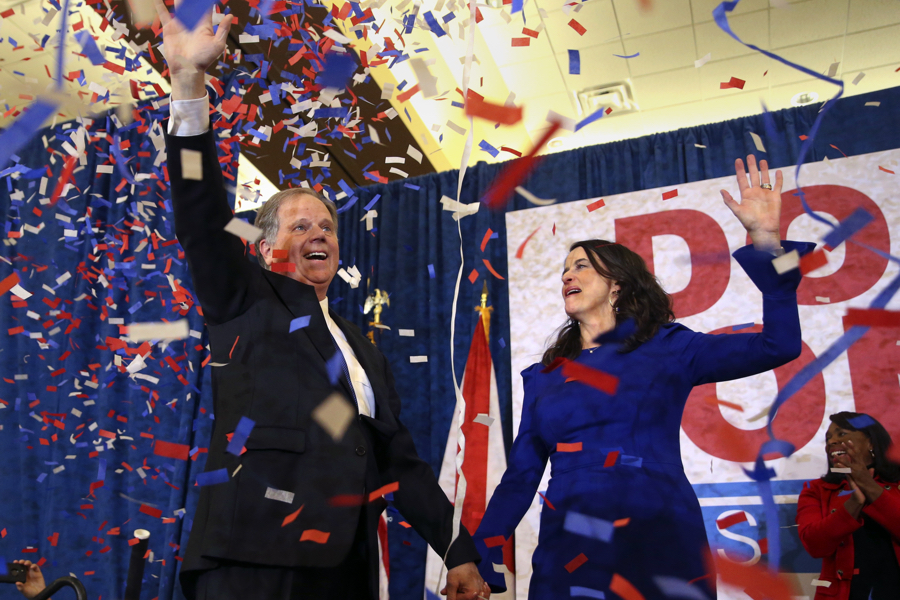 Massachusetts political leaders cheered the news Tuesday night that a fellow Democrat, Doug Jones, had done what had once seemed impossible and pulled off a win in deep-red Alabama against the religious hardliner and accused child molester Roy Moore.

Far removed from the action in the closely watched race, locals nonetheless had some major pull in the contest. Gov. Charlie Baker’s condemnation of Moore, including the unusual step of supporting his opponent, made national news. Former Gov. Deval Patrick traveled to the Heart of Dixie to campaign. Local activists worked the phones.

So the vibe was celebratory at home, and the state’s delegation spent the night congratulating those who made it happen on the ground in Alabama, and looking ahead to the future—hoping the victory might help quash the GOP tax plan, or possibly ride anti-Trump momentum to tip the balance of power away from Republicans in the Senate during the fast-approaching 2018 midterm elections.

“Thank you to all who knocked on doors, made calls, donated, spoke out and activated those grassroots to help decency win the day,” Attorney General Maura Healey wrote.

“We can’t stop now,” Warren said. “The 2018 elections are less than a year away. We must invest in campaigns across the country. We must take a stand against the hateful ideologies that have been making their way back into our country’s highest offices. And we must fight harder than ever before.”

She also called on Senate Majority Leader Mitch McConnell to seat Jones “without any delay.” The GOP tax bill reportedly could come up for a vote again as soon as this week, and it’s possible adding a Democrat to the Senate could sink it.

“To all those in #Alabama who made the calls, knocked on doors, carried the clipboards, got out the vote, and never gave up, America thanks you. Our democracy thanks you,” Warren’s colleague Massachusetts Sen. Ed Markey wrote.

Another local politician was sure to be celebrating Wednesday: Baker, and not just because Moore, who he opposed, lost. The Republican governor has been attacked for a joint fundraising agreement with the RNC that funnels donor cash from Massachusetts to the national GOP. The agreement continued even after his party resumed campaigning for Moore in Alabama, . Now that Moore has lost, that issue likely just got a lot less salient for Massachusetts voters.

“Democratic candidates for governor have lost a powerful weapon to use against Baker,” writes the Boston Herald’s Joe Battenfeld. “Democrats will have trouble raising Moore as an issue without him being in the Senate, so overall the night was a win for Baker.”

Of course, some of the region’s residents were just happy to take the win.