Curt Schilling’s Hurricane Relief Trailer Never Made It to Texas

This is what happens when 38 does philanthropy. 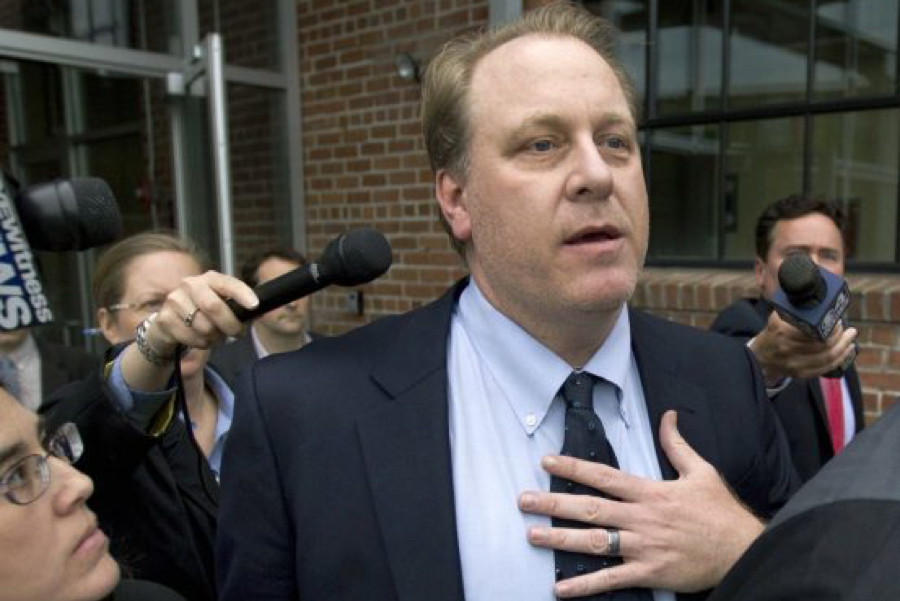 This story has been edited and updated.

Back in August, Houston was reeling from some of the most catastrophic flooding the region has ever seen, and donors around the country were stepping up to help. Millions flowed in to legitimate charities with experience in getting supplies to families in immediate need during a disaster. A Boston-sponsored supply drive, organized at City Hall Plaza and coordinated with Texas officials, sent massive truckloads of clothing and other goods to Houston.

Curt Schilling had other plans. The former Red Sox hero, now an erratic and chronically mad far-right radio commentator for the extremely online, decided this was his time to shine. Schilling announced that he, heroically, would gather supplies and haul them down to Texas himself, via his charity Operation Bullpen. He planned to livestream the whole experience, and record his show in the thick of it near the disaster area. The journey earned plaudits from Breitbart, for which he records a call-in show: “CURT SCHILLING LITERALLY DOES WHATEVER IT TAKES TO BRING RELIEF SUPPLIES TO HOUSTON.” And the effort earned the support of car magnate and big-time Republican donor Ernie Boch Jr., to the tune of a whopping $100,000.

Just before showtime, he needed to track down a trailer, and Keith Tobin and Tom Latham stepped in to help. Their 16-footer, loaded with pet supplies, departed shortly thereafter.

It never got to Texas.

According to NBC Boston, the trailer has sat immobile for months in Tennessee, loaded with undelivered supplies and plopped in the parking lot of a Home Depot. It apparently broke down en route to the disaster—a scenario Schilling live-tweeted at the time. Supplies did make it there eventually. But for four months, the trailer that didn’t had still not been retrieved, and eventually it was towed away and sent to a shop for repairs.

All that time, Latham and Tobin have been without their trailer, so they had to go pick it up. Schilling and his wife reportedly agreed to pay the $500 necessary to pay the mechanic who repaired it, as well as for their gas and tolls. The pair departed Tuesday night to pick up their abandoned trailer, according to NBC. They planned to drop whatever pet supplies are still usable at a shelter somewhere along the way.

This is, it seems, what happens when Curt Schilling does philanthropy. We probably could have seen some logistical issues coming, given the effort was led by someone whose skills include failing to run a successful video game company, giggling about journalist lynchings, and throwing rallies attended by almost no one. Schilling was, naturally, criticized for his efforts at the time. “This isn’t a moment for amateurs,” Bob Ottenhoff, president and CEO of the Washington-based Center for Disaster Philanthropy told the Associated Press. “I’m urging donors to support those organizations already on the ground and that have the expertise.”

But there are plenty of non-Curt Schilling-related examples in recent history of why donating goods instead of money in the wake of disasters is not inherently good, particularly when it’s done haphazard by individuals. Like after the devastating earthquake in Haiti, when efforts to collect badly needed supplies were hampered by some, um, unhelpful help. Donations to a drive led by Boston-based Partners in Health included such resources as dirty bedsheets, old medicine, and one rollerblade. In other cases, the initiative of individuals has been successful. Take, for example, the private planes stocked with supplies, sent by celebrities Mark Cuban and Bethenny Frankel to Puerto Rico after Hurricane Maria. Not that recovery relief should happen at the whim of wealthy TV stars, but the consensus was that their efforts were critical to getting aid to an island amid the threat of a humanitarian crisis.

While Schilling wasn’t exactly sending single rollerblades to Texas, the recovery effort inconvenienced those who stepped up to help how they could, and kept resources from getting where they were supposed to go. So this case makes it pretty clear: When it’s time to help, leave it to the experts. And never loan Curt Schilling your trailer.

Update:  Schilling in a Facebook post has called incident a miscommunication with some of his volunteers, and has apologized. Two trailers broke down in Tennessee, he said, and somewhere along the way, “I crossed them up. Totally 100% my fault,” he wrote, adding that he thought the media was making too big a deal of the mishap and not focusing enough on what his group has accomplished. “Unlike the Clintons, we actually took your charity and put it in the hands of people in need except for the faux pas with this trailer. That was clearly not taken care of properly until now and that’s on me.”

Since publication of this story, many supporters of Schilling and volunteers for his charity have come to his defense. They have pointed out that his group, Operation Bullpen, did successfully deliver supplies to Texas, and that money raised for the former athlete’s disaster recovery effort has been used to get supplies to Puerto Rico. According to an update on a fundraising page for the group (which has collected more than $227,000 from donors) it brought “hundreds-of-thousands of pounds of emergency supplies to the island.”

The trailer’s owner, Tom Latham, says he has returned home.