The “Bomb Cyclone” Brought Flooding, Rivers of Ice and Slush to Boston 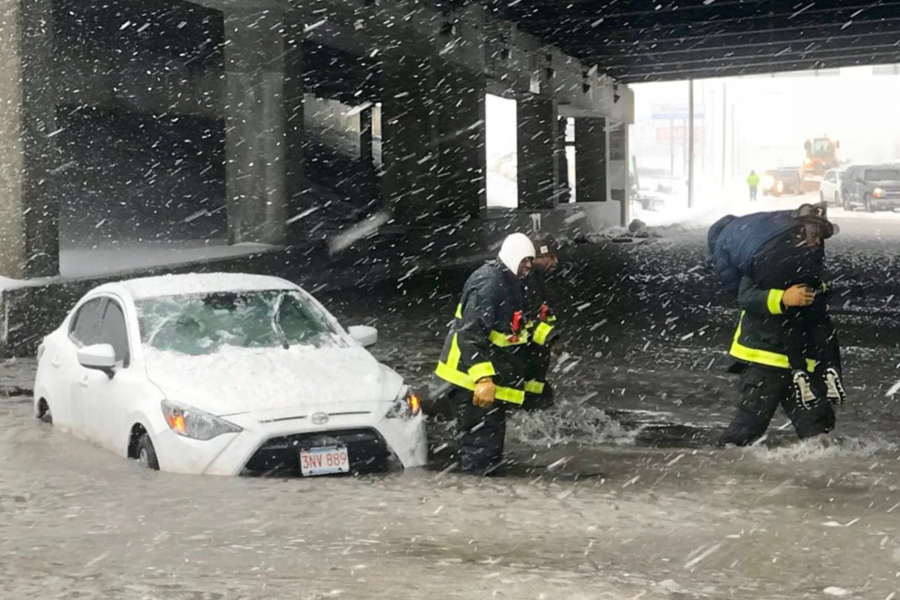 photo via the Boston Fire Department

As the powerful “bomb cyclone” battered the region with powerful winds, thundersnow boomed, and high tide rolled in, Boston and other coastal areas saw roads turned to slushy rivers, T stops shuttered, drivers trapped in cars, and at least one beach was slammed with icy “shrapnel.”

The National Weather Service reports that tides were nearing historic levels, cresting to heights not recorded since 1921.

We appear to be near the record high water level in #Boston. However, it is within a few tenths of an inch and this will need to be confirmed with the NOAA’s National Ocean Service (NOS) @noaaocean before we can confirm or deny whether the record was tied or broken pic.twitter.com/CHiTM6kJ9Z

At Long Wharf, where the icy, slushy water was nearly knee deep, one entrance to the Aquarium MBTA stop had to be closed, and a man had to be rescued from his SUV.

Boston firefighters also rescued a man trapped inside a car at Neponset Circle in Dorchester.

Neponset Circle firefighters come to the rescue of an adult male trapped by rising water pic.twitter.com/ai5DPO7zPg

Large swaths of Seaport Boulevard and sections of Fort Point saw currents of water flowing down the street.

@universalhub check out Seaport Blvd right now, disaster and its getting worse by the min….. pic.twitter.com/6schC67H9l

This vessel has rode up with the tide to street level here in the Seaport, which is not common. #Wx #MAwx pic.twitter.com/T7qdUbfmtt

One video shows the water was so intense, a dumpsters could be seen floating down the street.

Look at this video outside our window of flooding in #Boston historic #FortPoint #Seaport neighborhood that is causing big dumpsters to float down the street. #blizzard2018 @CNN @WCVB pic.twitter.com/mjfrZJYnKr

Photos showed cars stuck on I-93, unable to drive up an incline.

And cars in Winthrop nearly submerged.

This is Banks Street in #Winthrop photo courtesy Cheryl Reilly McSharry …. thinking of all the folks hunkered down along the coast right now. #wcvb #WinterStormGrayson pic.twitter.com/uqfZXbqP1r

The situation was so dire in Scituate that Town Administrator Jim Boudreau was warning residents not to head to the shore to watch the mammoth waves role in due to the risk of chunks of ice acting like “shrapnel coming off the beach.”

The MBTA announced service on the Blue Line between Wonderland and Orient Heights was suspended after flooding at the Beachmont stop at around 1:45. Service resumed at 2 p.m.

Thank you the the #MBTA Crews who are working to keep platforms clear of snow & ice.https://t.co/CAneYMgHPv pic.twitter.com/6aPxcFUW6I

Gubernatorial candidate Jay Gonzalez rode the T this morning, chronicling the journey he took from Needham to his campaign office in Cambridge.