After first responders doused a five-alarm fire, the water from their hoses crystallized. 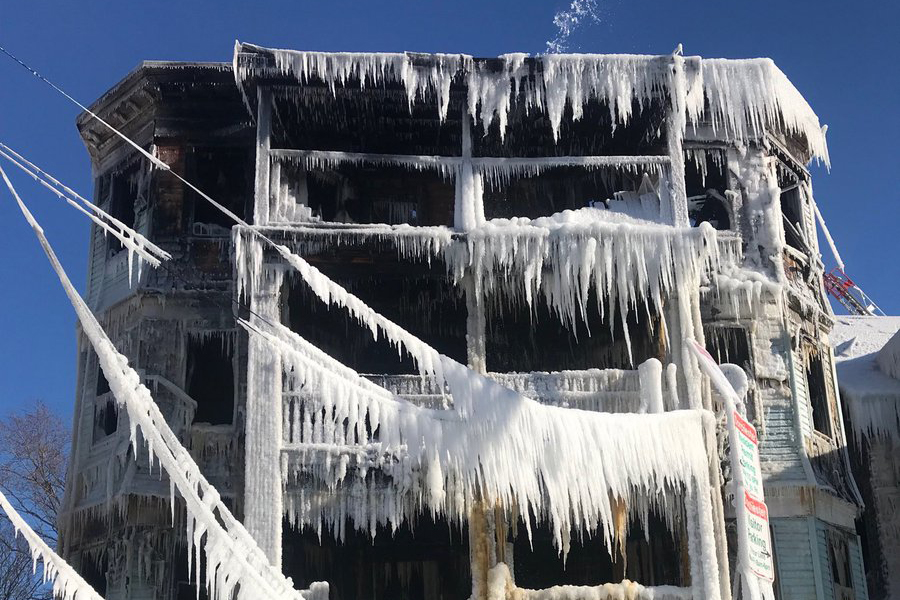 A colony of icicles has replaced the flames that engulfed a multi-family home in Dorchester on Saturday night, making the structure look like it would fit in better in a nightmarish snow globe than on the street.

About 100 firefighters responded to the Allston St. blaze—which, according to the Boston Globe displaced 18 people and sent two first responders to the hospital—at just after 10 p.m., when temperatures hovered near 0 degrees. The merciless cold was compounded by brutal wind gusts notching over 30 miles per hour and a resulting windchill of minus 25 degrees, according to the National Weather Service.

These two #firetrucks are #frozen in place, at the scene of a 5 alarm fire on #AllstonStreet in #Dorchester. The aerial ladder is frozen & won’t retract. They’ll have to be towed. #mawx #FrozenAmerica #coldsnap #coldweather #frigidtemps #ArcticBlast pic.twitter.com/cqywTMaKiM

The building, located near the Shawmut MBTA station, sustained roughly $1.5 million in damage, though none of the 14 people who lived there were hurt. Officials have not yet identified what started the fire, according to the Globe.

B side or right side of building pic.twitter.com/GUTf3ItDmV

The combination of extreme cold and hose water used to douse the fire left the now-destroyed building framed in an ominous layer of ice. The helmets of firefighters on the scene resembled igloos, and surrounding powerlines turned to frozen garlands. One of the trucks got frozen into place through to Sunday, when temperatures remained low.

The forecast suggests Boston is finally reaching the finish line of its brutal cold snap. Temperatures are expected to climb into the low 30s on Monday and could touch a balmy 38 degrees on Tuesday.