The Department of Homeland Security will end temporary protected status for El Salvadorans in the U.S. 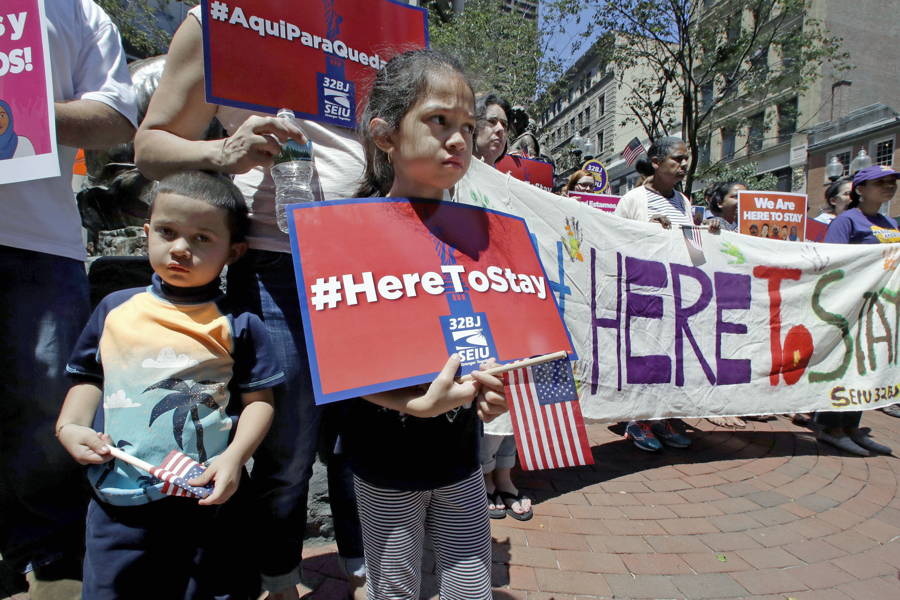 Nicole Castillo, 7, of East Boston, holds a sign while standing with her brother Diego, 4, and mother Elsa, who is originally from El Salvador, during a “Here to Stay” rally at the Irish Famine Memorial in Boston, Thursday, July 6, 2017. Immigration activists and labor groups gathered in Boston in opposition to President Donald Trump’s crackdown on illegal immigration. Photo via AP/Charles Krupa

Thousands of Massachusetts residents were told Monday they will have to leave their homes and return to El Salvador by the end of next year, as the Trump administration has stripped them of their legal immigration status and work permits.

In a decision decried by immigrant activists and local officials, the Department of Homeland Security Secretary Kirstjen M. Nielsen announced DHS would not renew the Temporary Protected Status permits for some 200,000 Salvadorans, who have been allowed to stay in the U.S. since an earthquake in 2001. They have until September of 2019 to leave or face deportation. There are 6,000 Salvadorans living in Mass.

In a statement, the department writes that a review of the situation in the country has “determined that the original conditions caused by the 2001 earthquakes no longer exist. Thus, under the applicable statute, the current TPS designation must be terminated.”

But local officials and advocates for immigrants decried the decision.

“This is the fourth TPS termination in just four months,” said Eva A. Millona, executive director of the Massachusetts Immigrant and Refugee Advocacy Coalition, said in a statement. “Given the dire conditions in El Salvador, which the U.S. State Department has warned Americans not to travel to, it is clear that nothing—not natural disasters, not hunger, not rampant violence—is seen as a valid justification anymore for protected status. Our government is perfectly comfortable sending longstanding, law-abiding residents into life-threatening conditions, and their U.S. citizen children as well.”

Massachusetts Attorney General Maura Healey warned in a tweet it would “uproot thousands of El Salvadoran workers, families and children who have lived in Massachusetts for years and contribute to our economy,” and vowed to “push for a more permanent solution” at the national level.

The withdrawal of TPS will uproot thousands of El Salvadoran workers, families and children who have lived in Massachusetts for years and contribute to our economy. #SaveTPS

The problem inherent in TPS, of course, predates Donald Trump. Designed as temporary relief after a disaster, the program has been extended in 18-month increments again and again for 17 years while recovery efforts stalled and the country was wracked with violence. All the while, Congress has not passed an immigration reform bill that might offer those Salvadorans some kind of pathway to citizenship or legal residency for their families. In that time, the thousands of Salvadorans living here have built lives for themselves—buying homes, starting businesses, and raising American children who in many cases have never been to El Salvador. So here we are.

The country since then has made significant improvements to its infrastructure with help from the international community, DHS argues. “Schools and hospitals damaged by the earthquakes have been reconstructed and repaired, homes have been rebuilt, and money has been provided for water and sanitation and to repair earthquake damaged roads and other infrastructure,” its statement says. “The substantial disruption of living conditions caused by the earthquake no longer exist.”

But the country is still experiencing turmoil, with gang violence and the influence of the drug trade contributing to make its homicide rate among the highest of any nation on Earth. Its government, according to the New York Times, had urged the U.S. not to end the TPS program, citing drought and saying it doesn’t have the resources to handle such a large influx of people. The country has also become reliant on the billions that Salvadoran workers send home while working jobs in the U.S., and which make up about a fifth of the country’s economy.

For those reasons, advocates for immigrants called the decision unfair and inhumane.

“There is no basis for terminating TPS,” the Lawyers’ Committee for Civil Rights and Economic Justice wrote in a statement Monday, which notes the program has survived Republican and Democratic administrations since it was established in 1990 by President George H. W. Bush, and is not made available to criminals. “We will not stand idly by as the Trump Administration continues its efforts to expel people of color and to generate fear in the heart of our communities.”

U.S. Rep. Jim McGovern, of Massachusetts, who helped write the law that created TPS, said in a statement that the move was “shameful and cynical”:

America has a proud legacy as a beacon of hope to the world, welcoming those who seek a better life. This decision by President Trump and Secretary Nielsen is a shameful and cynical move to punish these innocent families just to score political points with the extreme right wing Republican base. I am angry and dismayed at this cruel decision. It is a very distorted and narrow interpretation of the law, which provides flexibility to weigh current realities and not just the effects of the 2001 earthquake in El Salvador.

A similar decision was made to end protections for citizens of Haiti in 2016, a move that will also impact thousands of Massachusetts residents. But this week’s action targets the largest group of TPS recipients currently living in the U.S. The next-largest group protected by TPS, 57,000 citizens of Honduras, will have their status reviewed this year.