Beantown Greentown are not fans of the Attorney General. 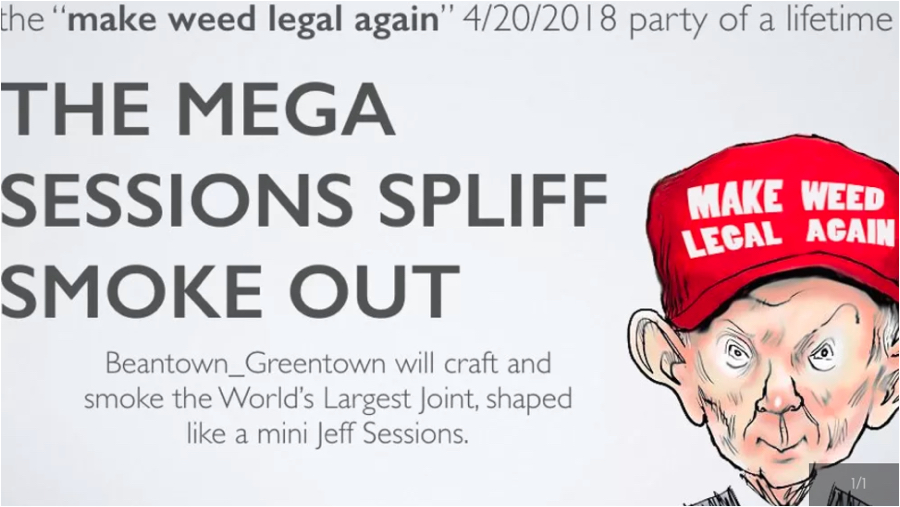 The Boston pot group Beantown Greentown caught the world’s attention last month when they set out to roll a record-setting 100-foot-long joint at the Harvest Cup in Worcester. Now the marijuana advocates and creative pranksters have a bigger, more pointedly political idea: They want to roll a giant joint shaped like Attorney General Jeff Sessions, and then light it up.

“We want to throw a little gas on the fire,” says Andrew Mutty, the group’s co-owner, “and smoke him out of office.”

Sessions has been vocal about his dislike of marijuana, referring to it at one point as “only slightly less awful than heroin.” But it was a recent headline-grabbing move of his that attracted the attention of Beantown Greentown.

Mutty says the idea dawned on the coalition of cannabis supporters, growers, patients, and business owners after the attorney general’s decision to empower U.S. Attorneys to prosecute marijuana-related crimes even in states that have legalized the drug.

The move sparked backlash both inside the pot business community and from state officials, even those, including Governor Charlie Baker, who didn’t support last year’s legalization campaign. And it pissed Beantown Greentown off.

“The ultimate goal is to raise awareness about how much Sessions is impacting the cannabis industry,” Mutty says.

Their goal, he says, is to construct a “skeleton” for the joint at the NECANN Boston Cannabis Convention in March, collect as many as 10 pounds of legal marijuana to stuff it with, and then smoke it at a “Sessions Smoke Out” party on the stoner-significant date of April 20 at a private location that has yet to be determined.

Proceeds will support several pro-marijuana groups, including NEVA (New England Veterans Alliance, MGAC (Massachusetts Growers Advocacy Council), and the MRCC (Massachusetts Recreational Consumers Council. A petition will also be circulated asking Sessions to resign, and Mutty has launched a GoFundMe campaign to help raise the $15,000 he thinks they’ll need to build the joint.

Drawings of the design for the human-shaped spliff include a caricature of Sessions wearing a suit and sporting comically big ears, along with a red hat with white lettering, reading “Make Weed Legal Again.” The joint, per Mutty, will be 4 feet in length, and about 10-12 inches in diameter.

While clearly a construction challenge, the feat shouldn’t be too much of a problem for Mutty, who is a sculptor and former middle school art teacher in Amesbury. He says he once built a giant dragon costume out of papier maché for his school’s Halloween fashion show. “It was a big hit,” he tells me. The Jeff Sessions joint is more or less the same thing, only this time he’ll be using rolling papers, cannabis twigs, hemp, and some smokeable glue and dyes. 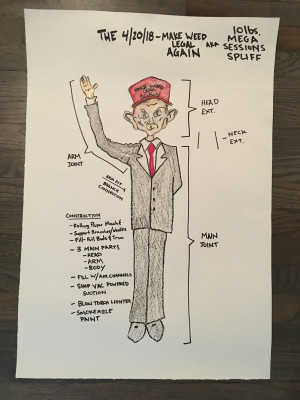 It could set yet another record, as they believe the largest joint on record only weighed in at five pounds (the 100-foot joint was about two). While they didn’t smoke the 100-foot-long joint, and instead chopped it up into smaller joints more easily lit, this time they actually plan to spark it up, with a contraption that involves a high-powered suction device powered by a shop-vac.

Why are they doing this? Mutty and his team think they’ve found a winning formula for inspiring a wide audience: An outrageous idea and lots of media attention, coupled with calls to action. “That’s why we rolled the 100 foot joint. It’s silly, but it means something and people talk about it,” he says. “It’s silly that it’s a joint shaped like this goofy, big-eared, short, wrinkly old guy, but you know what? We’re gonna do it anyways.”

Mutty stresses that this isn’t necessarily an anti-Trump protest. In fact, he says, about half the club’s members voted for him (he voted for Clinton). The group believes there’s a possibility of winning Trump over by appealing to his business sensibilities.

He’s also not worried about upsetting some people by, essentially, lighting the likeness of a political opponent on fire.

“Listen, if you’re gonna make a statement you’re always gonna rub somebody the wrong way,” he says. “We got a lot of negative backlash about the hundred-foot joint, but I think the positives outweigh the negatives. If you don’t speak up and you don’ t say anything, you’re just another person sitting there yakking with your buddies complaining about something you’re never gonna fix.”

“It’s freedom of speech,” he adds. “We live in America. I can say and do what I want. Otherwise, why is the flag red, white, and blue?”

Peter C. Bernard, director and president of the Massachusetts Grower Council, says he, for one, is on board. He sees the stunt as part of a New England tradition of stir-causing protest.

“It’s almost like dumping tea into the harbor, without having to lift a bunch of boxes and throw them over the side of a boat,” says Bernard, who represents commercial and private marijuana cultivators. He’s not bothered by the imagery at all, he says, even if it’s a bit aggressive. Plus, Bernard says, Sessions has essentially called him a bad person for using marijuana to manage pain from a back injury. So he has it coming.

Marc Shepard, president of the New England Cannabis Network, or NECANN, also gives it the thumbs-up, and certainly doesn’t see it as violent. “I don’t think anybody thinks that this is a burning in effigy. I think it’s a joke. It’s making light of something,” he says.

But he also thinks the issue is bigger than just Jeff Sessions, and that all the focus will ultimately have to be on pressuring Congress for reform. “It sounds awesome,” says Kamani Jefferson, a pro-pot lobbyist and president of the Massachusetts Recreational Consumer council. “You have to do more than just smoking pot and having huge parties to try to change the minds of politicians.” 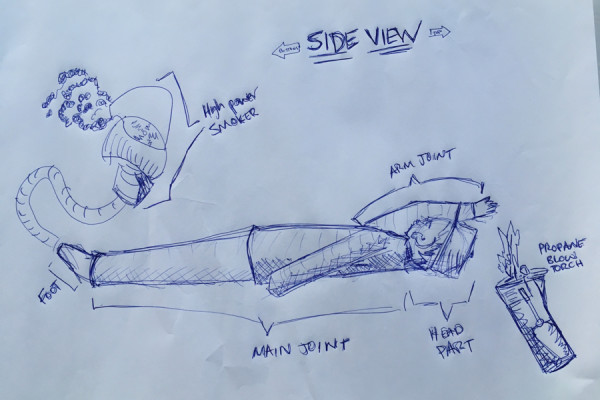