Two men who ordered wedding programs from Vistaprint say they were instead sent information about temptation and sin. 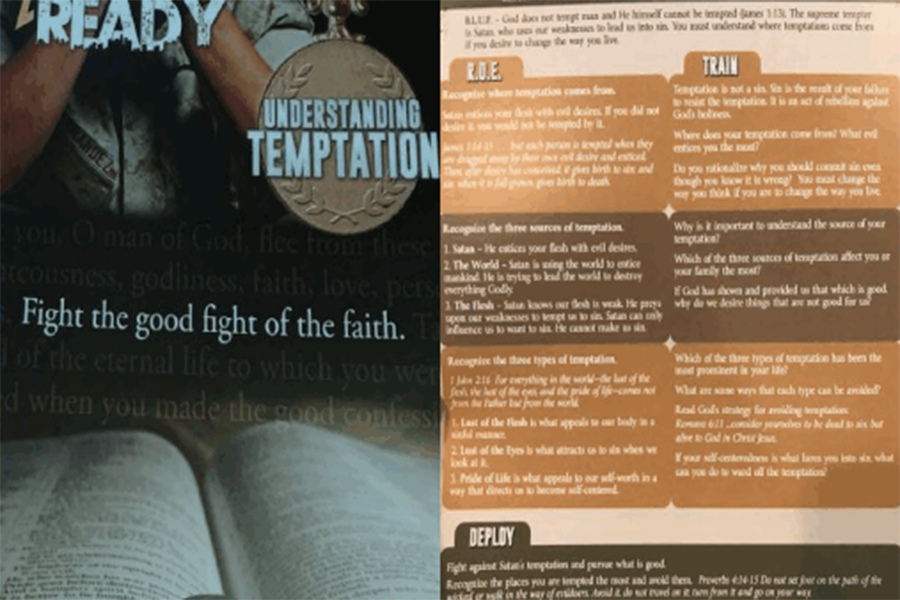 The pamphlet Stephen Heasley and Andrew Borg received in the mail. Photo via federal lawsuit

When Stephen Heasley and Andrew Borg opened the package of wedding programs they ordered from a Lexington-based printing company, they expected to find tasteful cards with a blue and white floral border. Instead, they found pamphlets on Satan.

In response, the couple filed a lawsuit in federal court in Massachusetts against the company, Vistaprint, and is accusing the company of attacking them with “hateful, discriminatory and anti-gay messages.” Sending the pamphlets, which featured messages about sin and fighting temptation with faith, constitutes “morally repugnant” behavior on Vistaprint’s behalf, the couple alleges.

Heasley and Borg, who live in Australia, were married in September in Pennsylvania. The lawsuit alleges Vistaprint “clearly targeted [them] due to their sexual orientation,” and the company’s behavior constitutes discrimination. In addition to the “mental and emotional distress” caused by the pamphlets, Heasley and Borg claim the company breached their contract and forced the couple to spend additional money on new programs at the last minute. The lawsuit seeks an unspecified amount of damages.

Vistaprint said it opened its own investigation into the incident and discovered that the pamphlets were intended for a different customer and were mistakenly sent to Heasley and Borg by a third-party contractor.

“Vistaprint in no way condones—and does not tolerate—discrimination against any of our customers based on their race, religion, gender, or sexual orientation,” the company said in a press release. “As an organization, we support diversity and reject discrimination in all forms.”

According to the Boston Globe, Vistaprint CEO Trynka Shineman said in a letter to customers and partners that officials are “incredibly saddened” by the mix-up. Shineman told the Globe that such behavior is “so not aligned with who we are as a company.”