No One Outside New England Is Happy about the Patriots’ Win

NFL fans across the country are not exactly thrilled about New England's AFC Championship comeback. 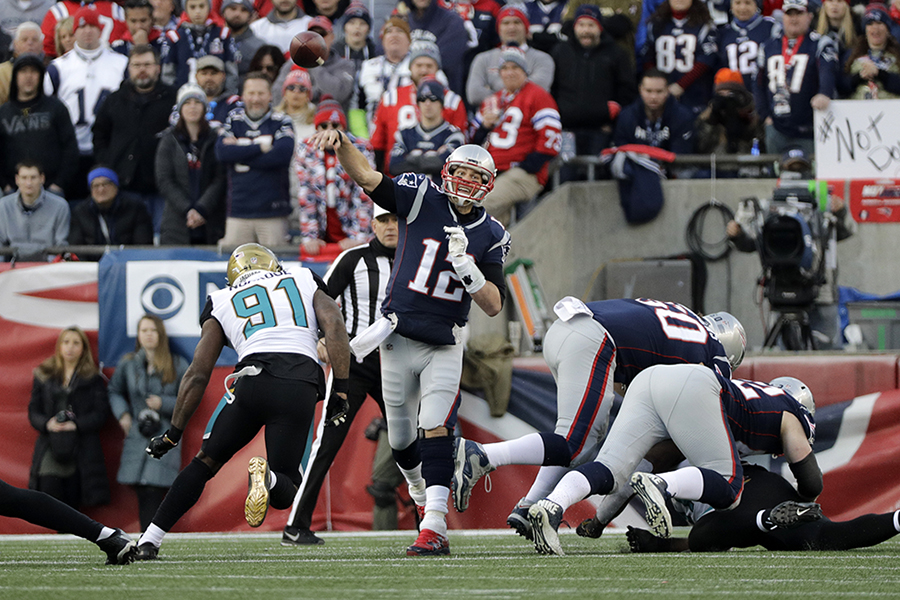 Obviously the Patriots didn’t (and were never going to) lose to the Jacksonville Jaguars, and so people outside New England are saltier than Comm. Ave. right before a snow storm. It’s not that Blake Bortles (who, despite his name sounding like a Pokemon, is a human NFL quarterback) and co. didn’t play well. It’s just that when you’re going up against Tom “The Storm” Brady and his protein bar-enriched pliability, it’s hard to not end up looking like a schlub.

The Twitter-sphere naturally lit up with tons of Pats hate following the team’s AFC Championship heroics. Strangely, it seems fans outside Foxboro are getting tired of watching the rest of the NFL squirm underneath Bill Belichick’s thumb. It sounds devastating, really. We’d say we know how these people feel, but, y’know…

New England fans are of course familiar with the brand of hater who pedals Patriots-related conspiracy theories to make themselves feel better. And there are the others who offer tepid “hot takes” about the sweet, sweet inevitability of victory:

Football is a simple game. Twenty-two men chase a ball for 60 minutes and at the end, the Patriots always win.

Hello New England Patriots! Welcome to your Super Bowl rematch against the Eagles. This is a reminder to try to win the game without:

I would rather walk 10 miles in 0 degree weather shirtless than watch the Patriots win another Super Bowl.

I’d rather watch the entire Twilight Saga than watch the Patriots win ANOTHER Super Bowl.

On the other hand, begrudging sportsmanship also reared its head. Bills linebacker Lorenzo Alexander tipped his helmet to touchdown Tom:

You may hate them. You may not respect them but you have admit what the Patriots continue to do is amazing!

Tom Brady is invincible, but even he’ll need a second act. If he takes over the league, everyone would be very hydrated, that’s for sure:

Bruh if the patriots make it to the super bowl again and win, they should just give the NFL to Tom Brady lmao

If you really want to bathe in the tears of the haters, the “brady retire” search on Twitter is highly recommended. But it’s also important to keep a healthy perspective on victory. When you win so often, it’s important to stay humble. We get that. But there are some among us who have not yet enjoyed the sweet spoils of a Patriots Super Bowl appearance.

Do it for the infants, Tom:

The Patriots haven’t been to a super bowl in 11 MONTHS. Our drought is OVER.

And there is always beauty in simplicity.

See you in Minneapolis. And until then, may everyone in Philadelphia enjoy this footage of how important Bill Belichick thinks his current trophy is.