Andrew Lelling did say his focus is on opioids, not weed. 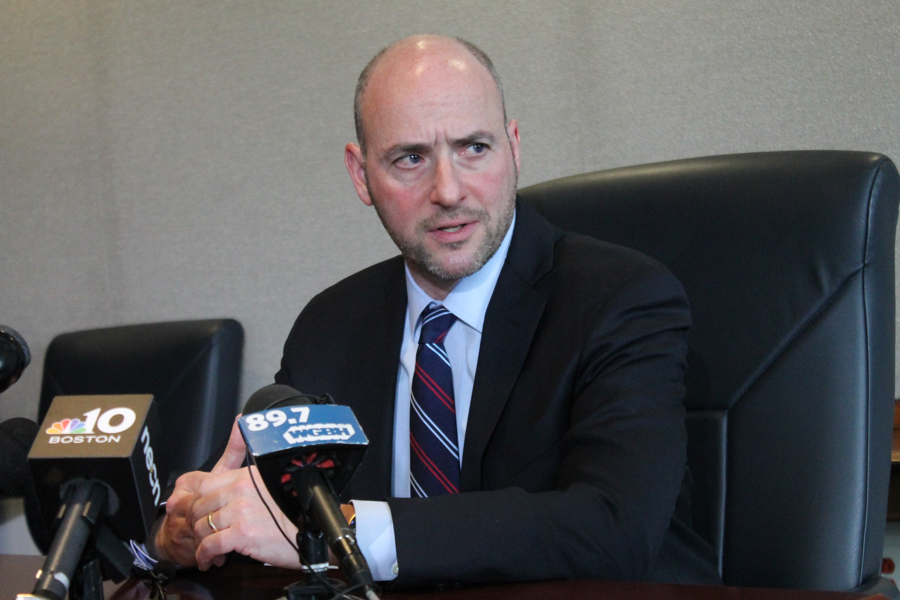 It looks like we’re never going to get a perfectly straight answer from new U.S. Attorney Andrew Lelling about what the future holds for legal marijuana. And maybe we just have to live with that.

In his first meeting with reporters after President Trump nominated him for the role, Lelling was asked again and again to clarify what will happen to all the people who work or invest in legal weed in the state. And again, he refused, and said he won’t rule out prosecuting even low-level employees at pot shops or cultivation facilities. However, he said, his office’s top priority is the opioid crisis, not marijuana.

“I think that understandably causes some concern among people who want to work in the new marijuana industry and I get that,” he said. “But there’s not much I can do about that except to say that I have about 14 prosecutors who specialize in drug enforcement. I can tell you that all 14 of them are spending the bulk of their time chasing down bulk trafficking of heroin and opioids.”

Lelling has found himself in the spotlight over the past several weeks after Attorney General Jeff Sessions sent new guidance to federal prosecutors that gave them the OK to prosecute people for marijuana crimes even if the drug is legal where they live. He caused some alarm this month when he said he wouldn’t rule out a crackdown, and was cryptic about exactly who is at risk under his watch. Amid all the uncertainty, banks have already abandoned pot businesses for fear of prosecution.

We did get some more clues about what the future holds. He said in the meeting that prosecutions pursued by the U.S. attorney’s office have typically been for big shipments of the drug from other countries, and involve money laundering, suggesting small-time operators aren’t on his radar.

So far, the U.S. Attorney’s Office has charged two men in federal court with running a large-scale marijuana grow operation in the state after a story about them appeared in the magazine High Times. If convicted, they each face a minimum of two years, and up to five years, in prison.

Medical marijuana appears to be relatively safe. Lelling noted that a federal budget rider known as Rohrabacher-Farr cuts off funding for federal prosecutions related to medical marijuana, and he abides by that rule.

As for talks about a law that would limit state and local police cooperation in marijuana cases (turning Massachusetts into a kind of sanctuary state for weed), he said he hoped to continue working with local law enforcement, but if not, his office will work “on our own.” Boston police, as well as the state police, have already said they won’t help federal officials bust people who are following the state marijuana law.

Lelling said he would not meet with the five-member Cannabis Control Commission, which is in charge of overseeing the new industry and has wanted to sit down with him, because the Department of Justice won’t let him meet with a regulatory body. And anyway, he said, he wouldn’t be much help. “At the end of the day I’d be saying the same thing over and over and over to them,” he said.

We also learned a few more things about Lelling and how he feels about marijuana.  On whether it’s a so-called gateway drug, Lelling said “the science is mixed.” He has already said he believes the drug is unsafe and has a negative impact on young people in particular. But he doesn’t seem to share Attorney General Jeff Sessions’ belief that the drug is “only slightly less awful” than heroin. “It’s not as dangerous a drug as opioids,” Lelling said Wednesday.

He also says he’s never smoked it. “Do I look like someone who has smoked weed?” he asked.

On immigration, Lelling said his office would adhere to the priorities of the Trump administration and increase enforcement. Lelling has met Sessions twice, he said. He’s never met the president.

He also acknowledged that he once co-authored a 2004 graphic novel about investigators called Industry of War, a fact unearthed in a WGBH profile of him.

The conflict between state and federal law makes things challenging, Lelling said. But he won’t say he thinks federal lawmakers should come up with a solution to the marijuana conundrum, or what that might look like. So far a reported 54 members of Congress, led by Sen. Elizabeth Warren, have called for a more permissive federal policy on the drug. “I know if you want to go into this industry and you’re not in law enforcement or a lawyer this may seem unsatisfying,” he said. “But I’m not a policymaker. I just deal with the law as it is. Is the law as it should be? That’s somebody else.”