The Pats' send-off for the Super Bowl was just better. 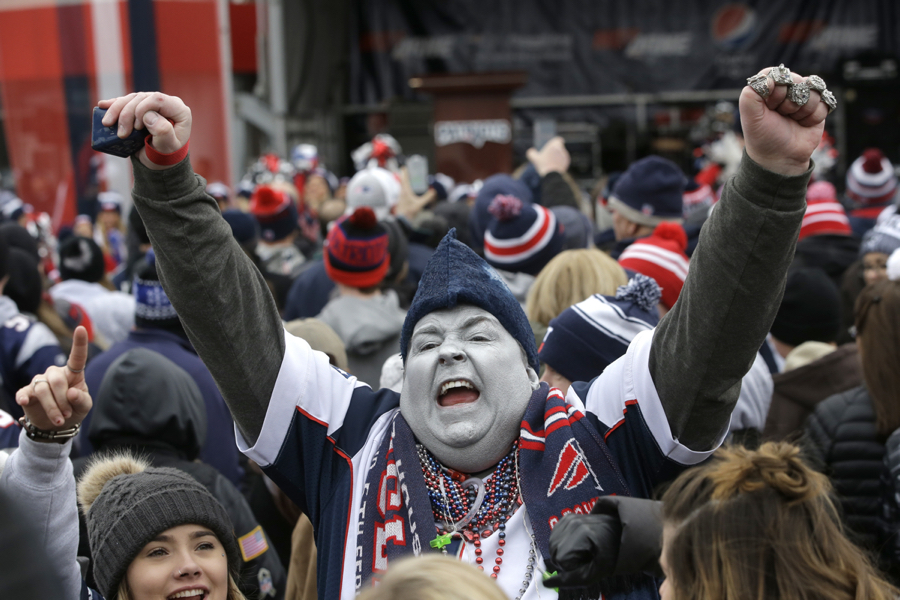 It’s basically tradition at this point, one of the benefits that comes with going so often: The goodbyes before the Patriots head to the Super Bowl are always something special.

For the Eagles…let’s just say it’s clear they’ve got a lot less practice.

Case in point, the send-off ceremony. In Foxboro on Monday, thousands of fans turned out for a big rally…

@ItsMaddieCat is at the Patriots send-off rally at Patriot Place! Check out that crowd. Go Pats!#SuperBowl2018 #Patriots #SuperBowl52 #NewEnglandPatriots pic.twitter.com/9MpYUu3PRq

…where they heard speeches from players, waved signs (“Just like Tom Brady, this never gets old,” read one of them) and shared a gigantic Boston cream pie.

The Boston Cream Pie made by Montilio’s. Get out the forks! #Patriots #SuperBowl #WCVB pic.twitter.com/KT7o8rzZRy

And then Tom Brady capped it off with a mic drop…

…followed by a tour bus parade past torches blasting fire into the air.

Thanks for a super send-off!

They even take disembarking to another level (see: Bill Belichick’s gangster chic look on his way down the staircase, wearing his dad’s fedora).

Bill Belichick arrives at Super Bowl LII wearing a fedora, which might be a tribute to one of his coaching idols, Paul Brown. He did that prior to a 2010 game when he pulled into a tie with Brown for 12th on the all-time wins list. (Screen shot by @JoeGiza). pic.twitter.com/KpsYwcWDu9

Meanwhile, let’s check in with the Eagles, a team that was treated to a snooze of a “pep rally” at a mall and then this:

Carson Wentz and Eagles get send off from team headquarters #Eagles heading to #SuperBowl in Minneapolis pic.twitter.com/kwVMK0vQQA

Then consider transportation. The Pats headed to Minneapolis via the team’s personal Boeing 767 AirKraft, the one with the handful of Lombardi trophies painted on the tail. The Eagles flew American. Need I say more?