The Brookline congressman characterized President Trump as a bully during his party's rebuttal. 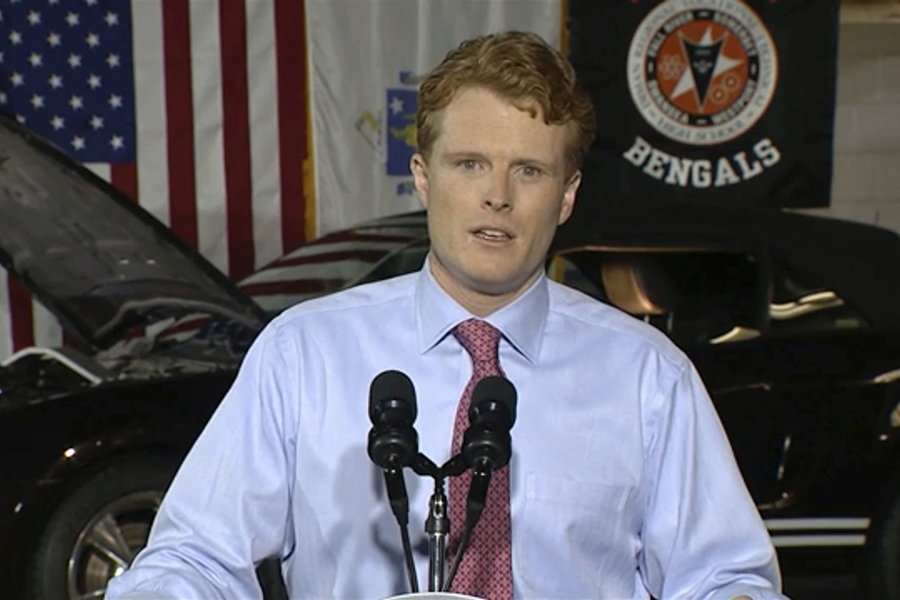 Rep. Joseph Kennedy III walked one of the most rickety and scrutinized bridges in politics on Tuesday night, and by many accounts, he made it to the other side unscathed.

The Brookline Democrat delivered his party’s response to President Donald Trump’s State of the Union Address from Fall River in front of a live crowd and a broken-down car. Without naming them directly, Kennedy characterized Trump and his colleagues as “bullies,” and criticized them for sowing the seeds of divisiveness.

Trump did not mention climate change, the national reckoning on sexual harassment, or the school shooting epidemic during the third-longest State of the Union in history, but Kennedy touched on all three issues. The 13-minute Democratic response emphasized equal opportunity and pushed back on the idea that one person’s success is predicated on another’s failure.

“They are turning American life into a zero-sum game,” Kennedy said. “As if the parent who lies awake terrified that their transgender son will be beaten and bullied at school is any more or less legitimate than the parent whose heart is shattered by a daughter in the grips of opioid addiction. So here is the answer Democrats offer tonight: We choose both.”

Kennedy’s speech got a lot praise, despite earlier criticism that his privilege and famous last name make him a poor choice to deliver a message of scrappy success and Democratic inclusivity.

I don’t care what his surname is. This was a solid #SOTU response, delivered well. https://t.co/IcFToj4ORJ

Proud to call you a friend, @RepJoeKennedy. You captured the idealism and optimism of our party — and this nation. Because you understand that everyone is entitled to be treated with dignity. And that in this country, no one gets left behind. Well done.

.@realDonaldTrump may have painfully tried to deceive the American people into thinking he’s not an unstable person, but no one’s falling for it.

Rep. Joe Kennedy, on the other hand, embodied our values as a country and exemplified the optimism that Americans are seeking. #SOTU

The opposition response to the State of the Union has been a bit of a cursed platform—just ask former Louisiana governor Bobby Jindal, whose response to Barack Obama’s State of the Union earned him endless comparisons to the 30 Rock character Kenneth the page. Or Marco Rubio, who’s still trying to convince everyone he knows how to take a sip of water.

Kennedy faced his own battle: Several conservative pundits on Twitter criticized Kennedy for struggling with a different kind of liquid during his speech: drool. The corners of the congressman’s mouth appeared particularly shiny, perhaps even moist, during the address, and so obviously critics assumed he didn’t have control over his salivary glands.

Not sure who thought it was a good idea to put Kennedy in front a car with it’s hood thrown open and have him drool against “power and privilege” but wow, just wow. #SOTU #Kennedy #MAGA pic.twitter.com/E1zEmrtmX7

Joe Kennedy delivering his State of the Union response

What’s up with that drool?

Less antagonistic viewers, on the other hand, chalked the sheen up to lip balm, a theory Kennedy confirmed to Good Morning America. After all, this is the dead of winter in Massachusetts, and the scourge of cracked lips doesn’t care if you have a really big speech to give.

Redheads have sensitive skin y’all. Give Chapstick Kennedy a break!

Several other Democrats offered responses to the president’s State of the Union, including Vermont Sen. Bernie Sanders and Virginia House of Delegates member Elizabeth Guzman, who gave the Spanish language response. Rep. Maxine Waters will be giving a response today.