Fire and a hail of bottles and laptops followed the Patriots' loss. 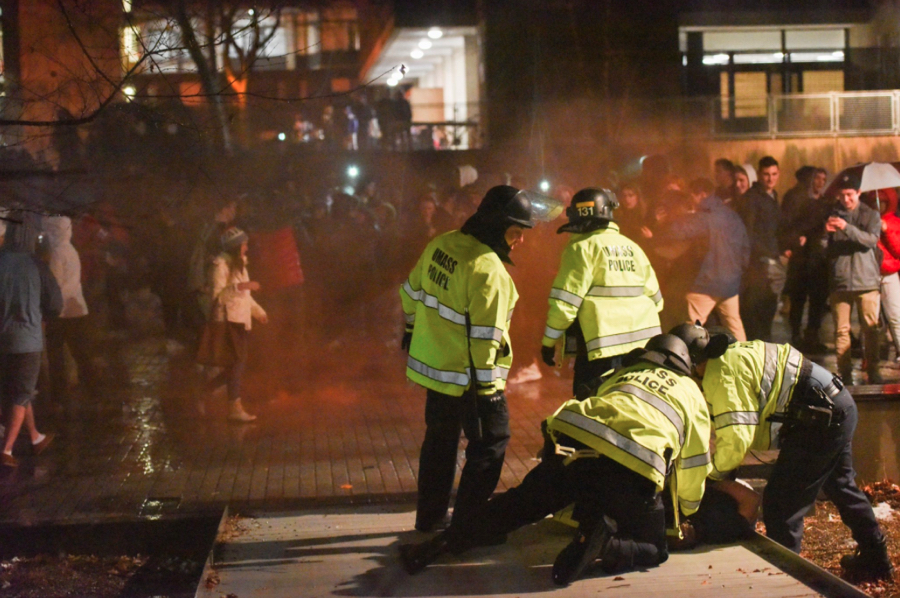 Win or lose, you can always count on things getting interesting at UMass Amherst after the Super Bowl, and the Patriots’ heartbreaker last night was no exception.

Shortly after the Pats fell to the Eagles, a crowd estimated at about 2,000 people poured into the Southwest section of campus, and things got pretty hairy. According to reports on the ground, there were bottles and cans—and, somehow, laptops—flying through the air, as well as an impromptu bonfire involving a couch, smoke bombs, firecrackers, the climbing of poles, and assorted mayhem.

Young adults at the Townehouse of Amherst condominiums near #UMass light objects on fire after #Patriots #SuperBowl loss. pic.twitter.com/3ZYWiExNXh

State and local police were soon called in to make everyone go home, and reportedly fired gas-filled PepperBalls into the crowd after issuing a verbal warning. In the end, after a little more than an hour of this, six people were arrested, and 12 were brought to the hospital with “head injuries, lacerations and alcohol intoxication,” the college said in a statement, adding that it’s looking into criminal charges where appropriate.

UMass seems to be taking the loss well. pic.twitter.com/jJHdM3w86D

It looks like UMass saw this coming (The Massachusetts Daily Collegian reported that a telephone pole had been removed from the area ahead of time). And for good reason: This is not the first time a lot of students have gotten together to do some extreme celebrating (or mourning) after a major event, sports-related or otherwise.

Rioting followed the Patriots’ loss in 2012, and 14 were arrested. Fifteen people were arrested on campus after the Red Sox won the World Series in 2013, despite the school’s best efforts to keep everyone calm. There was also the infamous 2014 “Blarney Blowout” riot, a St. Patrick’s Day celebration that ended with 73 people taken into custody, and even the death of Osama Bin Laden in 2011 prompted some UMass-style celebrating, with a crowd of about 1,000 chanting “USA! USA!”

The campus tends to react more calmly when the Pats win. Last year’s Super Bowl victory brought an estimated 3,000 out on campus, but police described that celebration as “peaceful” and there were a couple of broken windows, but no arrests. It was a similar situation in 2015, when a crowd of 3,000 also stayed calm after the W, to the surprise of many.

But things are different, apparently, when the Pats take an L.

A young man was arrested in Southwest living area, Sunday, Feb. 4, 2018 during a riot after the Patriots lost the Superbowl to the Eagles @MDCollegian #SBLII pic.twitter.com/jtALPe2urL

Did it match up to the Super Bowl celebrations in Philly, though? Absolutely not.

UMass trying to get on Philly’s level pic.twitter.com/UdYB4j4FHD