The Congressman explained Moulton and Mohammed on Late Night. 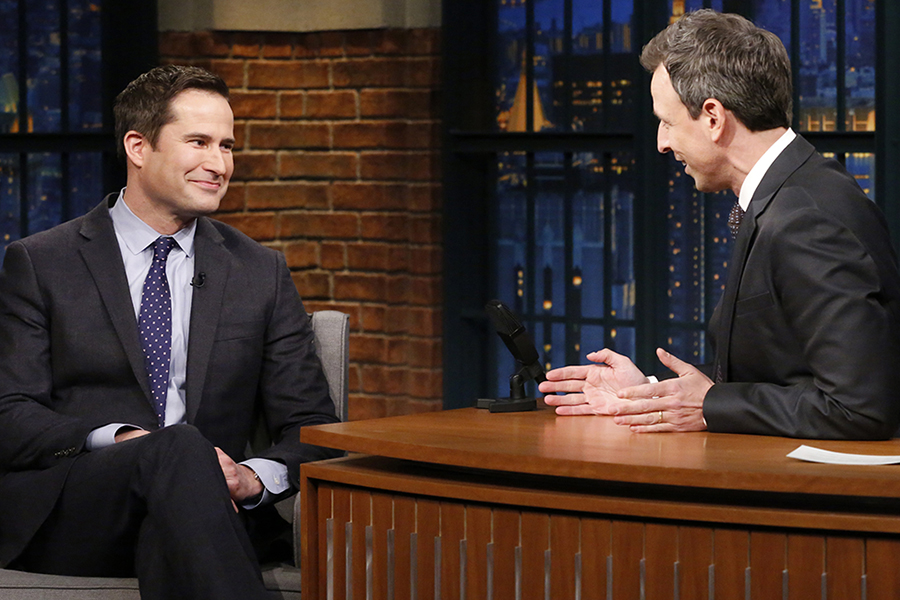 Seth Moulton was big in Iraq.

While deployed with the Marine Corps, the second-term Congressman cohosted a twice-weekly news show with his translator, Mohammed Harba, aptly called Moulton and Mohammed. The TV program was a hit, and on Wednesday night, the Salem Democrat explained to Seth Meyers (another Seth who knows a thing or two about entertainment) what it was like to be a star in Baghdad.

“We were celebrities,” Moulton told Meyers. “I used to get fan mail. I used to have to sign autographs in the street. No one asks me for my autograph now as member of Congress!”

After Saddam Hussein was ousted from power in 2003, Moulton was tasked with helping the recently liberated Iraqi media, and his show was originally intended to be a propaganda tool. However, as he told the Boston Globe in 2007, Moulton and Mohammed soon evolved into a candid analysis of the day’s events—and skyrocketed the two hosts to fame.

“We actually believed in the Marine Corps that a free media was important to a democracy—sort of a crazy concept these days,” Moulton told Meyers. “All this TV station had ever done was play tapes from the Ministry of Information in Baghdad.”

Moulton’s military experience not only gave the Iraqis a TV show to talk about, but also inspired his political career. The Congressman told Meyers that being a Marine means he is not afraid to shake up the status quo and challenge the Democratic establishment. Moulton said he is doggedly working to recruit more veterans to run for Congress, and he’s encouraged 19 candidates to get their names on the ballot. (Though his direct influence over all 19 is challenged by some.)

But it turns out that Moulton wasn’t the only Wednesday Late Night guest to lay claim to Massachusetts’ sixth district. John Mulaney, the standup comedian, is the direct descendant of not one, but two, former representatives. Mulaney’s great grandfather, George Bates, represented the sixth district from 1937-1949, and his great uncle, William Bates, was the Congressman from 1950-1969.

Moulton and Mulaney took a nice photo together backstage, so it doesn’t look like the comedian has any plans to take back his family’s Congressional seat.

Tonight I got a history lesson from John @mulaney on the set of @LateNightSeth: his great-grandfather and great uncle were members of Congress who represented the same Congressional district that I represent today. pic.twitter.com/14cTfwWCD4