Or is there some other reason why none of the roads make sense? 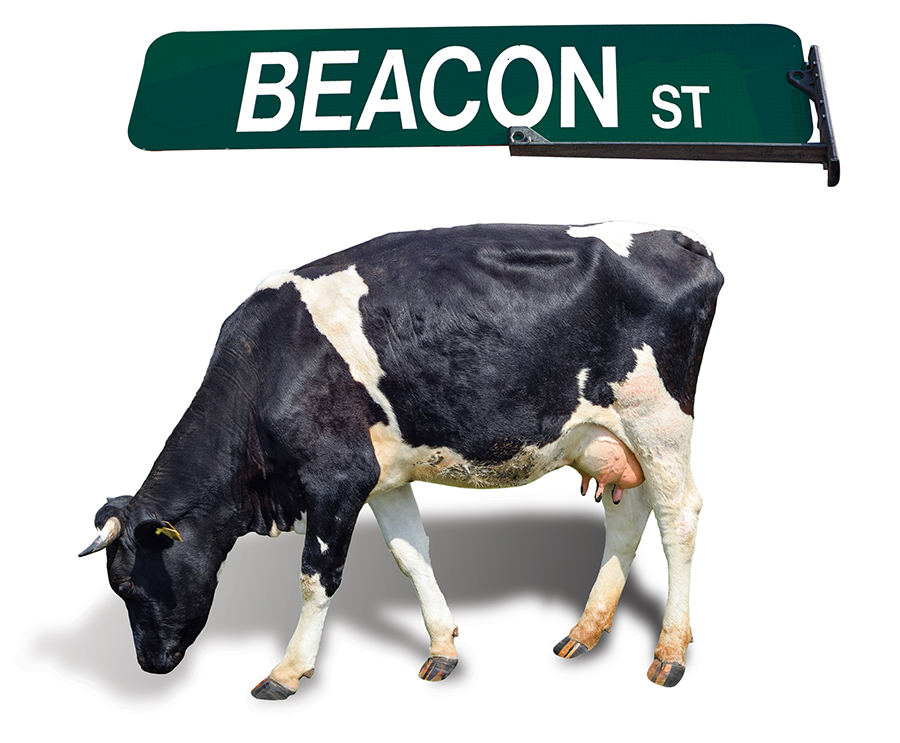 People always say Boston’s crooked roads are because the citizens of Olde Boston just paved over cow paths. But for folks who otherwise showed remarkable amounts of ambition and ingenuity, did early Bostonians really just leave city planning to the cows? Or is there some other reason why none of the roads make sense?

To be honest, J.H., I can’t determine exactly when this rumor began, but I can trace it at least to Ralph Waldo Emerson, who in 1860 wrote: “We say the cows laid out Boston. Well, there are worse surveyors.” Indeed, the cow path legend is an appealingly folksy theory, but historians have long since put it out to pasture.

I focus instead on three likelier reasons for Boston’s unreasonableness: The city is old, the city is built on varied topography, and the city is really several towns joined together. If you look at a 1775 map the British army drew, Boston was just a web of streets veering around the three humps of the Trimountain on the congested Shawmut Peninsula. L’Enfant didn’t dream up his famous grid plan for Washington, DC, until 1791, while Chicago spread out its superblocks in the mid-1800s. And both cities were designed from scratch from swampland. Where we’ve built neighborhoods from lowlands or landfill—the Back Bay, the South End, Southie, Eastie—a grid plan prevails, and then ends abruptly where each district ends. Tufts has digitized antique atlases that show how the city grew like a jigsaw puzzle as it annexed other towns, such as Roxbury (1868), Dorchester (1870), and Charlestown, West Roxbury, and Brighton (all 1873). Viewed this way, Boston seems less a Venn diagram of bovine crop circles than a chunky chowder of villages.

I ran these ideas by local cartographers Andrew Woodruff and Tim Wallace, who together produce the excellent Bostonography website. Wallace observed, “When you have a city like Boston that experienced steady land-building for decades, you’re bound to end up with a somewhat wonky street grid.” Woodruff cited our region’s love of urban squares: “I think of the larger street system as a series of connections between nodes.” Factor in topography and annexation, Woodruff said, and “it aaalmost makes sense.” But both map gurus emphasized that these are just guesses. So if we’re going with guesses, we might as well go with one as commonly cited as the cow paths: Our street “plan” is a “screw you” to unwelcome visitors, be they Redcoats during the Revolution or Yankees fans on game day at Fenway. That’s ambitious and ingenious enough for me.