A Snowstorm, a Car Window, and a Nor’easter Good Deed in Southie

Sometimes winter brings out the best, instead of the worst, in people. 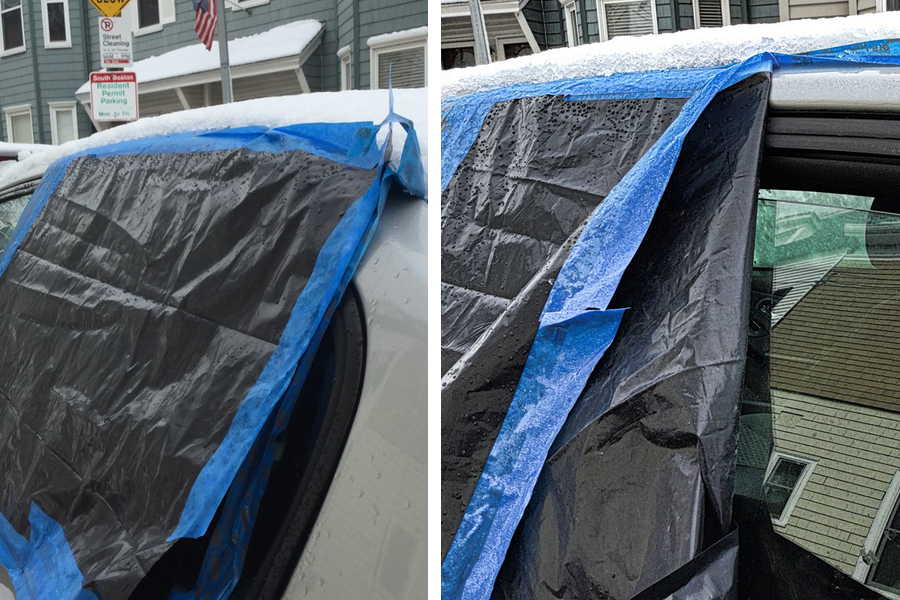 We’ve all heard the stories: Slashed tires, mean notes, threats of graphic violence. Winter, as we all know, doesn’t always bring out the best in people.

But not this time. Longtime South Boston resident Eileen Murphy is happy to report that last night, a good wintry deed was done in Southie. While shoveling the sidewalk today after last night’s nor’easter rolled through, Murphy, 62, says she spotted a black plastic sheet attached to the back-left side of her car.

At first she feared the worst, thinking maybe there had been an accident, and that her window had been shattered. But that wasn’t the case, she soon learned. She had mistakenly left her window open a crack, and an as-yet unidentified neighbor (he or she didn’t leave a note) had taped a trash bag over it to keep out the rain and snow.

“My oh no moment turned into a no way moment,” Murphy posted on Twitter Thursday afternoon, along with a pair of photos. “Left window down & an anonymous elf tarped & taped rear window. Thank you kind neighbor whoever you are.”

The message has since been “favorited” more than a hundred times, and is getting a whole lot of love on a neighborhood Facebook page. “It’s so nice to hear kind deeds done in our town,” wrote one neighbor who commented on a post about the surprise. Wrote another: “OLD SOUTH BOSTONIANS.. THE REAL PEOPLE.”

Murphy says she’s pleased so many people are embracing her tale of wintry kindness in her block between K and L streets, where she’s lived for the past 38 years. “Southie gets such a bad rap with parking spaces and such,” she says. “It’s like any community of 35,000 people. You’re gonna have the good, the bad, and the ugly. I personally think there’s a lot more of the good than anything else.”

Some good news: Her car is fine, because apparently whoever patched up her window knew what they were doing, and she reports that the tape was particularly strong stuff. “They did it really well,” she tells me. “There was not a drop of rain or a snowflake in that back seat. It was great!”

Murphy suspects she knows who is responsible—a man who parks behind her and and has a truck full of construction supplies. She hopes she can thank him soon. “If it is who I think it is,” she says, “this would not be the first time this person has extended me a kindness and then some.”

My oh no moment turned into a no way moment. Left window down & an anonymous elf tarped & taped rear window. Thank you kind neighbor whoever you are. #Southie. pic.twitter.com/BqpyDjrkUr