Three nor'easters in, a video of a man in a Disney costume is the antidote to this dreary season. 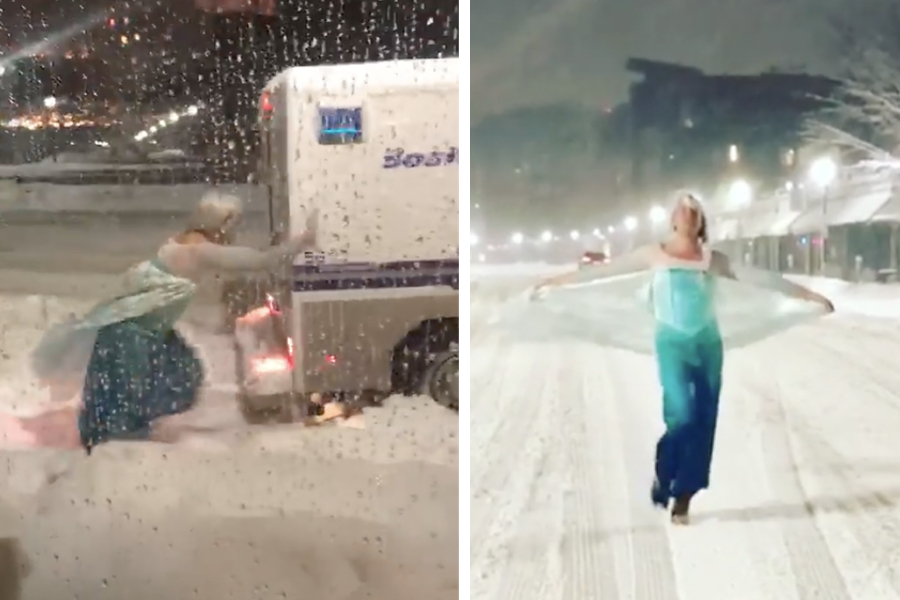 Has this onslaught of nor’easters crushed your spirit yet? Has losing power not once, but potentially three times in only a couple weeks made you curse the day you decided to settle down in this cold, wretched city? In other words, has the cold started… bothering you?

Well, if there’s anything we should all know about this home of ours, it’s that just as it’s kicking us when we’re already down, something pure and beautiful can happen that makes it all OK. Maybe there’s a mysterious yeti traipsing through Somerville in a blizzard, say. Or someone surfs in Fort Point when the neighborhood is underwater. Or Guzzles a Bud Light while chest-deep in floodwater. Thanks to Boston’s spirit and ingenuity, and its heroes, we endure.

And this time, my friends, that hero is Drag Elsa.

Video captured outside The Gallows in the South End Tuesday night by publicist Chris Haynes shows a man in a dazzling costume of Princess Elsa from the 2013 Disney movie Frozen, complete with the character’s blue dress and snow-white wig, expertly helping loose a Boston Police Department vehicle from a snowbank.  A determined “Elsa,” braving the blizzard conditions and cold, can be seen directing the vehicle’s driver, heaving, and digging—all while keeping the elegant costume at bay—while restaurant patrons (who could have done more to help but, as it turns out, were not needed) laugh and cheer. Eventually, with the help of “Elsa” and “Elsa” alone, the cop pulls away, and our protagonist takes a well-earned curtsy.

The clip already has millions of views on Facebook, it’s been shared tens of thousands of times on Twitter, and it has earned plaudits in local and national media.

So just who was this whimsical Good Samaritan? Boston journalist Megan Johnson, writing for People, has identified him as 37-year-old Boston attorney Jason Triplett, who had ventured to the South End eatery with a group of others dressed in drag and now says he hopes to use his new internet stardom “to meet Adam Rippon,” the Olympic figure skater.

First of all…I would just to say that regardless of the obvious similarities, this is NOT me. #bostonsnowstorm #winterstormskylar #elsa #frozen #sorrynotfrozen

So don’t let the never-ending season of chill and gloom get you down. And please join me in saluting Drag Elsa, the undisputed Queen of winter, 2018.

A drag queen dressed as Elsa just single-handedly freed a stuck police wagon from a blizzard in the middle of March. If that sentence doesn’t perfectly encapsulate the spirit of Boston, I don’t know what does.