A State Rep. Says It’s Time to Scrap the “General Hooker Entrance” at the State House

She says the double meaning makes it "tone deaf" and inappropriate. 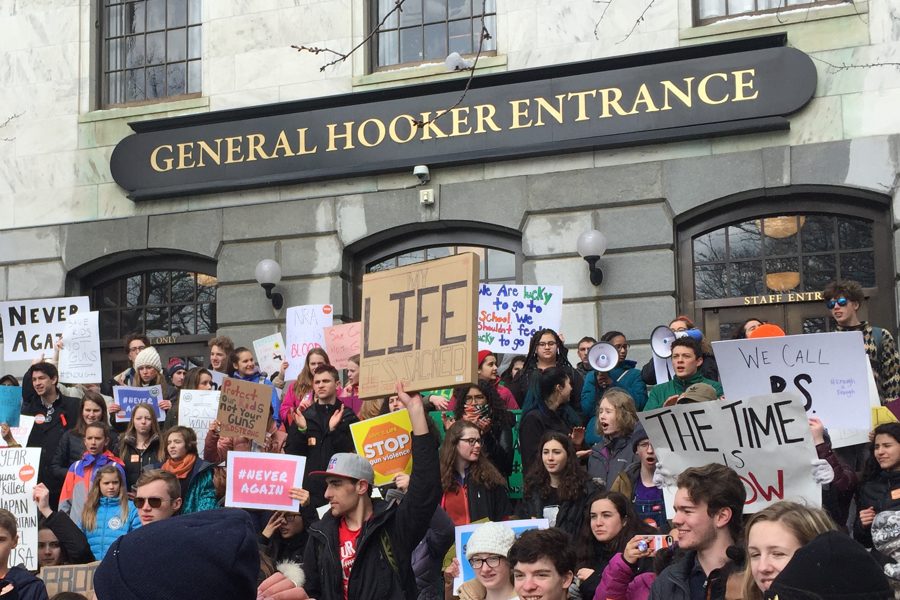 Photo by Spencer Buell from “On a Snow Day, Students Rally in Boston Against Gun Violence“

If you’re going to the State House, chances are you’re walking through the “General Hooker Entrance.”

A large black-and-gold sign bearing the entrance’s name greets visitors to the building, along with a giant bronze statue of its namesake, Civil War general Joseph Hooker, sitting on a horse. The double-meaning of his name—which, as you’ve probably noticed, is a synonym for “prostitute”—has fueled generations’ worth of bad jokes, raised its share of eyebrows from tourists, and led selfie after selfie in front of double-entendre laden signs for the landmark.

And now, according to one state legislator, it’s time for the “General Hooker Entrance” to go.

State Rep. Michelle DuBois, of Brockton, took to social media on Wednesday to decry the name for the entryway while hundreds of students were making their way into the State House to call for gun control measures. She had “seen teenboys tease teengirls [sic] about being ‘general hookers’ waiting in line at the entrance,” she wrote, and thought the jokes were inappropriate. “R U a ‘General Hooker’? Of course not! Yet the main entrance of the Mass State House says otherwise,” she wrote on Twitter, in a post that also linked the issue to the #MeToo movement. “It’s not all about rape & harassment but also women’s dignity A ‘funny’ double entendres misrepresented as respect for a long dead general?”

R U a “General Hooker”? Of course not! Yet the main entrance of the Mass State House says otherwise.#Metoo it’s not all about rape & harassment but also women’s dignity A “funny” double entendres misrepresented as respect for a long dead general?
1 Keep statue
2 Take sign down pic.twitter.com/3H67dRXAzN

She suggested that the giant sign above the doorway be taken down, but said she believes the statue of the historical figure should stay. On Facebook, she called the signage “tone deaf” and “patriarchal,” and suggested that visitors avoid using the entrance “unless they have to.”

It did not go over well. Critics pounced, and the tweets and Facebook post were flooded with dozens of critical responses. “I would consider taking this down and doing some homework. If you don’t do that I would consider resigning,” wrote one commenter on Twitter. “This is an embarrassment and you should be ashamed for your constituents.” Wrote another: “Wouldn’t talking to the teen boys about why that harassment is inappropriate be better than this course of action?”

This was not DuBois’ first time getting ensnared in controversy over posts on social media. DuBois came under fire last year, when she took to Facebook to warn undocumented Brockton residents to shelter in place after hearing rumors about impending ICE raids in the city.

An aide for DuBois did not immediately make her available for an interview on Thursday, but she told the State House News Service that she thinks the situation would be resolved if Hooker’s first name were added to the giant sign to clear up any misconceptions about its meaning. She also described the wording of the signage as “discriminatory harassment” that could potentially be rectified under the language of an anti-harassment bill being debated on Beacon Hill this week.

She is far from the first person to raise concerns about the special placement of “Hooker” in front of the home of state government.

There were even a few tweets about the awkwardly named landmark when reports about the students’ rally emerged on the news.

In fact, according to Peter Drummey, librarian at the Massachusetts Historical Society, the decision to build the Hooker statue along Beacon Street was contentious even before it was erected in 1903. Those who supported it noted that he was born in Hadley and led a large contingent of Massachusetts soldiers in the war, Drummey says. But those who opposed it argued that Hooker wasn’t all that good of a general (he’d lost a major battle to Gen. Robert E. Lee), he didn’t have a particularly strong a connection to the state, and—and this is an important one—there had been salacious (and unproven) rumors about prostitutes hanging around Hooker’s headquarters, back when everyone gossiped about the exploits of the nation’s top generals. Contrary to a somewhat popular belief, the word “hooker” as a synonym for “prostitute” does not refer to the general, and had been in use long before he became well-known. So his lewd-sounding last name certainly didn’t help matters. “There was a distaste for him and his personal morals,” Drummey says. “So people right from the time when the statue was put up there, there was this play on words.”

Charles Francis Adams Jr., a Civil War veteran and onetime president of the Massachusetts Historical Society, hated the Hooker monument so much that when he passed by the section of the State House where it was built, according to Drummey, “He would walk on the opposite side of the street so he wouldn’t have to walk near the statue, because he held General Hooker in such low regard.”