Can More Development Stitch Boston Together?

Sixty years ago, the Mass. Pike split the city apart. Now, one developer is taking the high road to sew it back up. 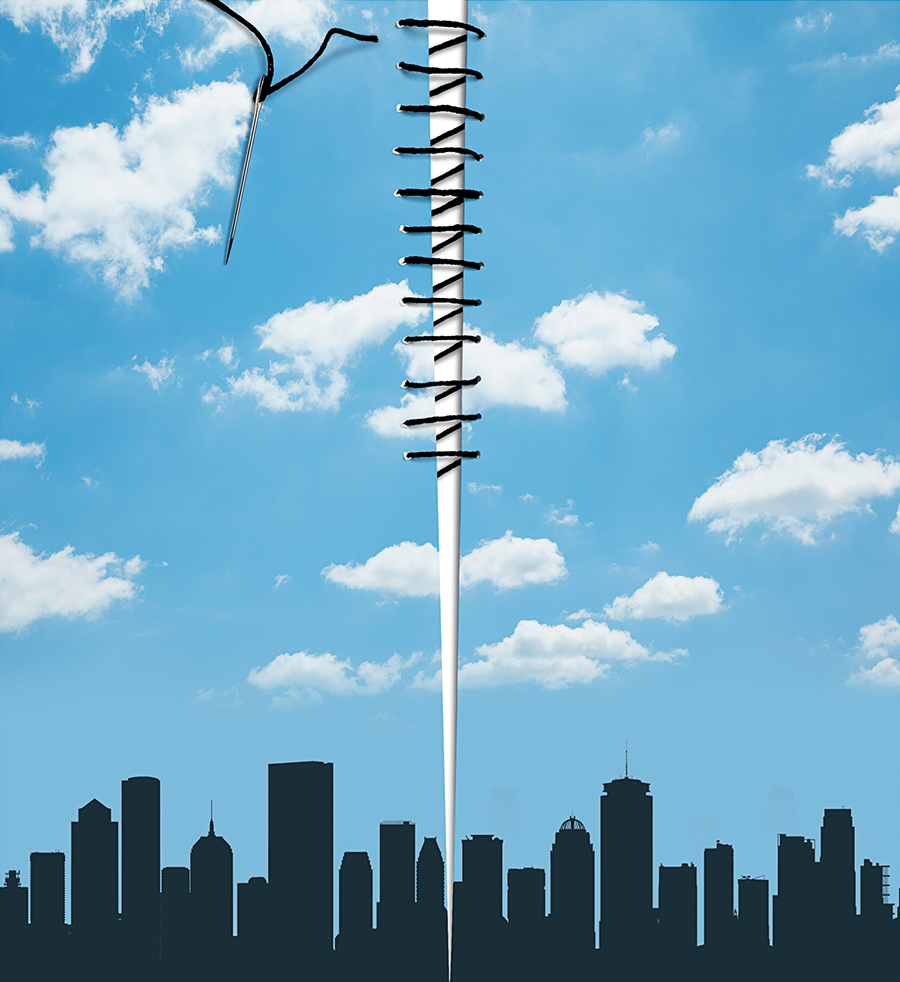 Look, up in the sky! It’s a bird, it’s a plane, it’s… Boston’s largest air-rights project?

Okay, maybe you missed the news, or maybe its importance was never very clear, but developer John Rosenthal recently sealed a deal to start work on the Fenway Center, a million-plus-square-foot plaza of high-end shops, luxury apartments, and office space. In a city where each new skyscraper is heralded as transformative, the Fenway Center stands out as the rare project that could actually change the face and feel of Boston forever. If all goes to plan, Rosenthal will erect a 27-story tower that straddles the Massachusetts Turnpike between Beacon Street and Brookline Avenue, making it the first air-rights project over the highway in decades. Believe me when I say it would be a huge win for the city—one we’ve needed for a long time.

First, some history: The Mass. Pike, which cleaves the city in half, was never designed to remain raw and exposed. Its planners anticipated the approval of dozens of projects intended to knit together the city’s fabric high above the highway, tying the Back Bay to the South End and Kenmore to the Fenway. Of course, that never happened; all we’ve got in that regard are the Prudential Center and Copley Place. Walk through Boston today, and you’ll see how quickly the Mass. Pike can make the city feel like a dystopian wasteland. Modern tree-lined streets, historical brownstones, and busy storefronts suddenly give way to congested concrete bridges, chain-link fences, and traffic—always traffic. The gulf between the neighborhoods seems vast, and the turnpike feels more like a wall than a culvert.

Plenty of developers have, of course, cast eyes at that zone over the highway, hoping to make a profit out of literal thin air by buying and utilizing coveted air rights, and, in the process, make Boston contiguous again. Doing so, however, requires the alignment of countless political and financial stars. Those who have chased air rights in the past have been foiled by the complexities of simultaneously making deals with the state (which owns the highway) and the city (which provides all the infrastructure), as well as the daunting engineering required to construct a foundation over several lanes of fast-moving traffic.

That we’ve failed to build anything meaningful above the Mass. Pike seems especially ludicrous today in light of the towers of iron and glass sprouting up in every corner of the city. In the Fenway, Samuels & Associates, Skanska, and others acquired one tiny parcel of land at a time, pushed for changes to zoning laws, and turned a bleak strip of tire shops and gas stations into a bustling midrise, mixed-use neighborhood. In South Boston, a moonscape of parking lots became the buzzworthy and business-friendly Seaport. The Big Dig buried a nasty elevated highway and gave us the beloved Greenway and a new entry point to downtown. Real estate values soared as these places became popular destinations. And yet, until recently, no one could close that east–west gash that is the Mass. Pike.

Rosenthal played the long game. He bided his time for 15 years while prickly Mayor Tom Menino was in office. Then he teamed up with Gerding Edlen, a West Coast developer whose fingerprints can be seen on the Troy Boston, in SoWa, and the Eddy, in East Boston. Together, they were able to secure additional investors, gain broader support, and ultimately win approval to proceed with the Fenway Center in two phases.

Critics may argue that the project can only hope to stitch together a small piece of the Mass. Pike, but Rosenthal’s air-rights deal opens up incredible possibilities to make Boston whole again. It should also serve as a catalyst for similar projects in the future, many of which sit in drawers, waiting for the right moment. Let’s hope this is the start of something big: the suturing of the Mass. Pike, one of our city’s deepest wounds.