Police shared an "artist rendering" of the feathery suspect this week. 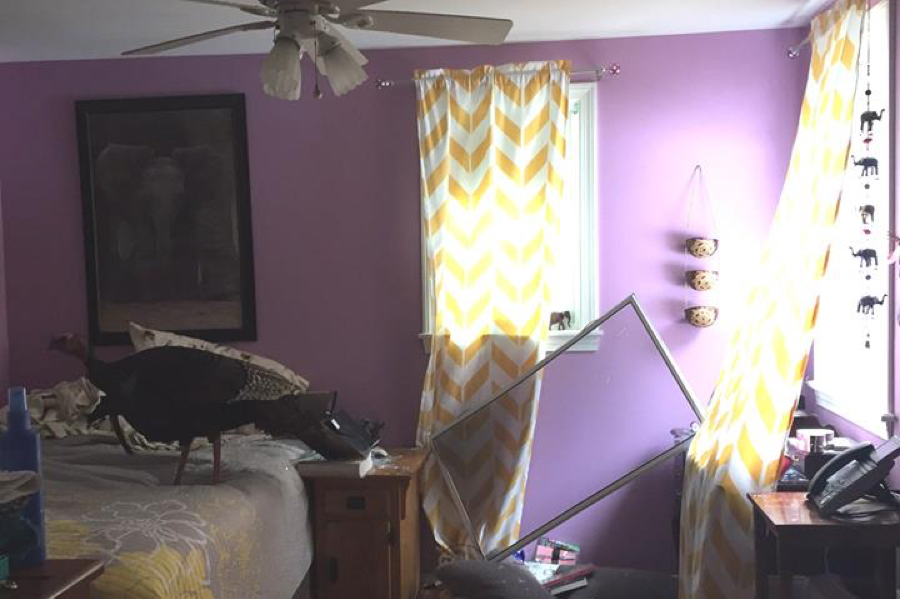 Turkeys are a strange breed. Just ask anyone who’s ever seen a rafter of them strut confidently across a busy highway, angrily attack a public servant, or conduct a black magic ritual in broad daylight. By some combination of evolutionary biology and hundreds of years of close contact with humans, these birds do not give a flying flock about our personal space or well-being.

In fact, there is abundant evidence that the species is coming for us. For revenge, perhaps? Perhaps so.

Case in point: This crime scene in Kennebunk, Maine:

According to police in the scenic coastal community, a turkey “Peeping Tom” was found inside a resident’s home after it “forcibly entered” the residence by, apparently, plowing its meaty body through a window.

In photos captured by police and shared on Facebook, the bird can be seen perching on top of a bed, claiming it as its own, while appearing to stare at itself in a large mirror. Broken glass is scattered across the floor, and a window screen is cast aside in a corner.

Police also shared an “artist rendering” of the bird based on the photos. “Please be on the lookout for this ‘Tom,'” the department wrote. (According to local news station WMTW, police were able to trap and release the bird in the wild).

This is by far not the community’s first brush with fowl criminals. About three years ago, the police department posted video of another group of birds who were, allegedly, “casing” a local jewelry store.

But this particular bird has garnered plenty of internet fame over the past several days. The department’s Facebook post has been shared more than 1,000 times, and stories about the turkey’s exploits have appeared in outlets including the Boston Globe and New York Post. Which, we have to assume, was its plan all along.