Thousands Head to Boston Common for the March for Our Lives

On a nationwide day of action, a massive crowd led by students rallied for gun reform. 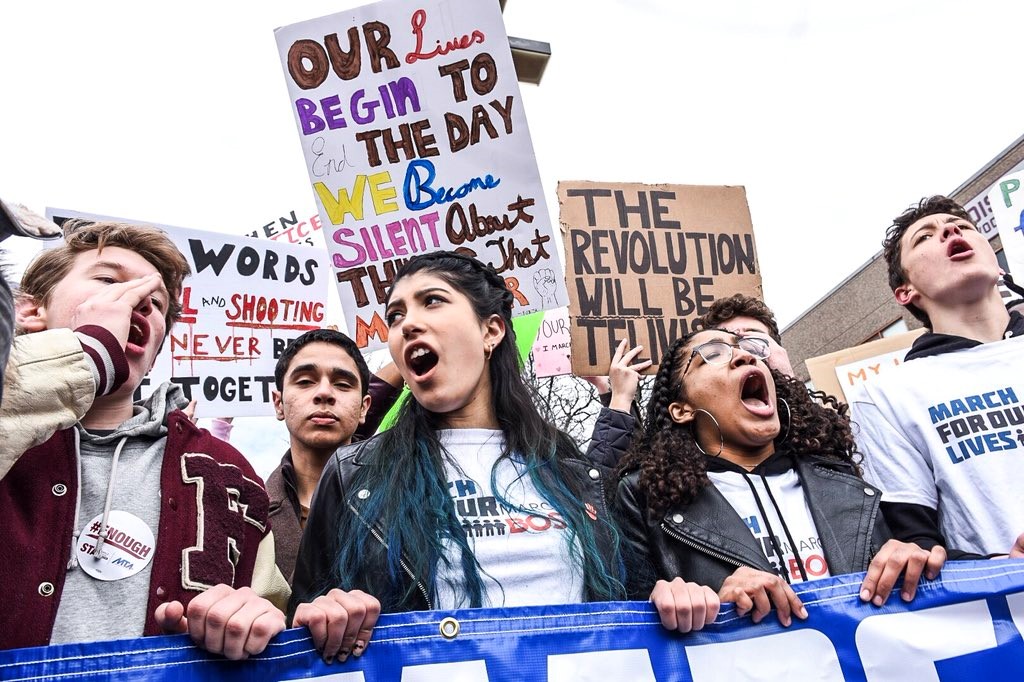 Led by students from across Massachusetts, tens of thousands made their call for gun law reform impossible to ignore on Saturday as they made their way in a seemingly endless swarm from Roxbury to Boston Common.

Waving signs reading “#NEVERAGAIN” and “Protect Children! Not Guns!”, protesters took part in a nationwide March for Our Lives, held in cities around the country in the wake of a school shooting that killed 17 in Parkland, Florida.

They met at Madison Park Technical Vocational High School at 11 a.m., then marched up Columbus Ave. toward the Common for a 2 p.m. rally, where young people and teachers were scheduled to offer remarks on changes to laws on the local and federal level, including an extreme risk protective order, or “red flag,” bill in Massachusetts, and a U.S. ban on assault weapons, akin to the one in place in this state.

Just a small part of the Boston March for Our Lives pic.twitter.com/mH2Fg65v4d

At the park, the crowd heard from Massachusetts teenagers, teachers, advocates, and college students, among them Leonor Muñoz, a Northeastern undergrad joined on stage by her sister Beca, who survived the February massacre at Marjory Stoneman Douglas High School.

“The thing that sets the people of Parkland apart is our wealth and the color of our skin,” the younger sister said into a microphone. “We cannot be complacent with a system that designates certain areas as safe while communities of color continue to be neglected, abused and disproportionately affected by gun violence. We are here united until no child ever lives with the fear of a bullet. Not one more!”

Protesters from the march in Roxbury have just entered the Boston Common. pic.twitter.com/5COJmrEFaE

Video of #MSDStrong students speaking about the fact that communities of color are disproportionately effected by gun violence and the need to work together to stop it. #MarchForOurLives #MarchForOurLivesBoston #boston #bostoncommon #leadership #leaders2018 pic.twitter.com/EhNkzbS07h

Marjory Stoneman Douglas senior Leonor Muñoz, right, hugs her sister Beca Muñoz after she recounts her experiences on the day of the shooting to the crowd at Boston Common during the #MarchForOurLives rally. pic.twitter.com/yaqKh8JC12

Organizers have decided not to feature elected officials in the official program, saying they wanted to highlight student voices and emphasize that the movement is being led by youth. They chanted “Hey hey! Ho ho! The NRA has got to go!” and “This is what democracy looks like!” while parents and teachers largely took a back seat.

Just the tail end of the March. I haven’t seen the front for ages; this is just a small portion. #MarchForOurLivesBoston pic.twitter.com/D7k47aYx3f

Hundreds of students & supporters are making their way down Columbus to Boston Common during Boston’s March For Our Lives this morning. Students are stopping along the way chanting “Enough is Enough!” & “Hey Hey NRA, how many kids have you killed today?” #MarchForOurLivesBoston pic.twitter.com/I6jaPPjdcb

Thousands of students March For Our Lives from Reggie Lewis Center to Boston Common against gun violence #wbz pic.twitter.com/mqpdI9aOwf

Politicians did however make an appearance at the beginning of the march, among them U.S. Sen. Elizabeth Warren and Boston Mayor Marty Walsh.

I’m so proud of our young people today and what they’re accomplishing. They aren’t giving up this fight and neither should we! pic.twitter.com/sQfgBVBY0L

These are the faces of the people in Worcester and all across the country who are fighting back and demanding change. I love it. #MarchForOurLives pic.twitter.com/ldQAkOvIMB

The protest came two weeks after school walkouts and a day of lobbying at the State House. They have broad support at home: A recent WBUR poll found that a majority in Massachusetts support tighter gun laws, 98 support universal background checks, and 67 percent oppose a push to arm teachers with firearms.

Meanwhile, the March for Our Lives saw its largest contingent in Washington, D.C., where hundreds of thousands descended on the capital.

Support for marchers also came from stars like Celtics legend Bill Russell. “I am proud of this generation standing up for injustice & having their voices heard, making real change. The world is listening,” he wrote on Twitter. “Some may not know me but I stand with you.”

If you can get out & support @AMarch4OurLives today I am proud of this generation standing up for injustice & having their voices heard, making real change. The world is listening. Some may not know me but I stand with you @Emma4Change #marchforourlives @MSNBC @mtv @naacp @NBA pic.twitter.com/ypSeeT1LVH

As they headed to the Common, where barricades and a stage had been set up, protesters snarled traffic along the route to the park and packed MBTA trains. The T announced on Twitter that the Boylston stop would be shuttered temporarily and that buses with stops along the route would be detoured.

The #MBTA #OrangeLine is carrying thousands of people to today’s #MarchForOurLives #Boston pic.twitter.com/cRJvWoGO4E