Josh McDaniels Played Coy on What, Exactly, the Patriots Promised Him

The offensive coordinator turned down the head coaching job in Indianapolis to stay in Foxboro. But he remains vague about what Robert Kraft and Bill Belichick said to change his mind. 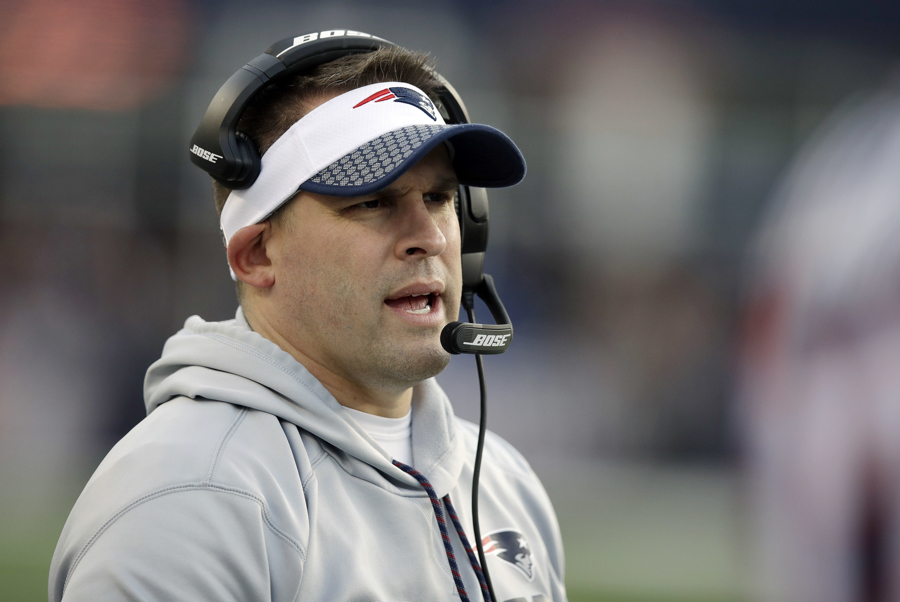 New England Patriots offensive coordinator Josh McDaniels watches from the sideline during the first half of the AFC championship NFL football game against the Jacksonville Jaguars, Sunday, Jan. 21, 2018, in Foxborough, Mass.(Photo via AP/Charles Krupa)

Sherlock Holmes, we have a case for you.

Sleuths tasked with solving celebrity-related mysteries may be a bit tied up with the whole “who bit Beyoncé” issue, but there’s another famous-person puzzle that needs attention. Patriots offensive coordinator Josh McDaniels appeared to be heading west for a job coaching the Indianapolis Colts at the end of last season. We like to imagine the Patriots threw him a farewell party, complete with cake that Tom Brady didn’t eat and beer that Brady maybe chugged very quickly.

But then, Happy Trails stopped playing. McDaniels turned the light back on in his Gillette Stadium office, and, hours after the Colts announced he’d be shepherding the team into the future, decided he’d be back in Foxboro in the fall.

Which, of course, begs a simple question: Why?

McDaniels offered little clarity when he spoke with reporters on Monday, saying that he “wasn’t 100 percent sure what the future was,” at the end of the season, but a conversation with Patriots owner Robert Kraft and coach Bill Belichick, “gave [him] reason to pause and consider this whole situation.”

According to the Boston Globe, the offensive coordinator had a year remaining on his Patriots contract, which was adjusted following talks with Belichick and Kraft. McDaniels was not, however, given any guarantees about future jobs he may hold in the organization.

McDaniels appears poised to follow Belichick as the head coach of the Patriots, but the succession plan seems far from set in stone. The details of Belichick’s contracts have also been shrouded in mystery for years, as the Patriots have remained tight-lipped on how much the coach makes and how long he’s under obligation to stay with the organization. So we’re left with a lot of questions about what Kraft promised McDaniels and if Belichick committed to a retirement date. McDaniels playing coy about his conversation with his colleagues didn’t give many answers.

As for his “difficult” decision to turn down the Indianapolis job, McDaniels offered more clarity. He told reporters, according to the Globe, that he has great respect for Chris Ballard, the Colts general manager, and that everyone in Indy handled the situation professionally.

“It was never my intention to go into this and put anybody in an awkward position or do any harm to anybody,” McDaniels said, according to the Globe. “I just felt like, once I knew the whole picture and I had the opportunity to make a decision, it was tough, but I feel like I made the right one.”

Sure, McDaniels may know the whole picture, but right now we’re stuck looking at a newly printed Polaroid that, as wise man André 3000 once advised, needs to be shaken.