The controversial decision will be met with legal resistance. 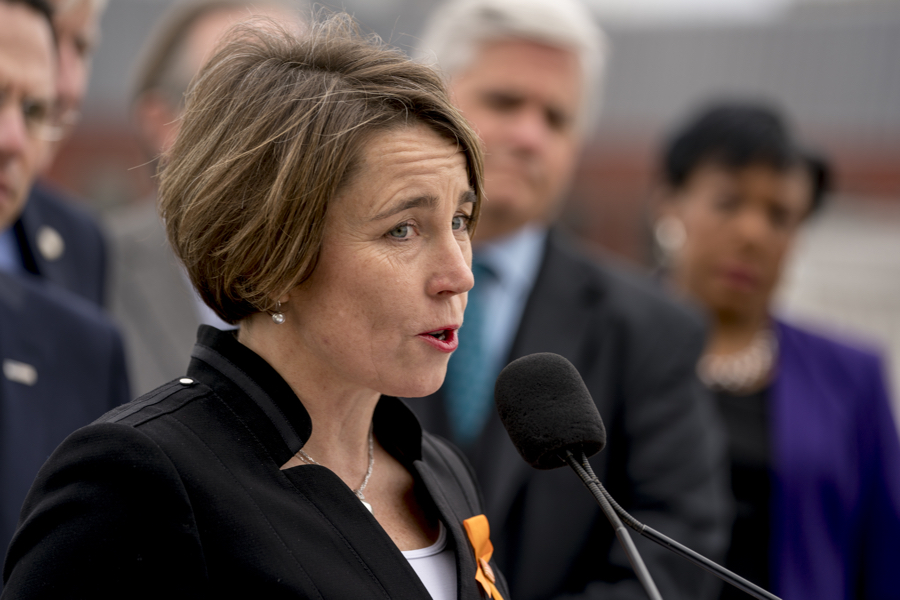 Massachusetts Attorney General Maura Healey speaks at a news conference near the White House, Monday, Feb. 26, 2018 in Washington. Eight Democratic Attorneys Generals call for measures to combat gun violence, issues that they have hoped to be able to raise with President Donald Trump. They say they have yet to be included in the conversations with Trump. (AP Photo/Andrew Harnik)

Given her history with this sort of thing, I’m sure you all saw this coming. But here we are again. Another of the Trump administration’s barely-veiled attacks on immigrants—and, specifically, on blue states like Massachusetts where there are a lot of them—will be met with a lawsuit from Maura Healey.

The attorney general announced this week that the Commonwealth will take federal government to court over a decision to add a question about citizenship status to the 2020 U.S. Census, which Massachusetts officials have derided as an effort to muddle the results of the critical decennial survey.

Trump’s Commerce Department said on Monday that it would in include an immigration question for the first time in 70 years, a change presented as a way to enforce federal voting law and sniff out fraud. But critics have said the move is likely to discourage undocumented residents (and perhaps even immigrants who have documentation) from filling out the census, for fear of attracting attention from an emboldened federal deportation force.

The Census, a massive and expensive undertaking that happens only once every 10 years, is supposed to get an accurate count of the population regardless of whether they are citizens or permanent residents. Results are used to determine how federal subsidies are spent, how political boundaries are drawn, the number of representatives a state sends to Congress, and the amount of weight given to each state in the Electoral College. A census that under-counts immigrants could thus have a disproportionately negative impact on states with dense urban centers and high concentrations of foreign-born people, as well as in border states and rural communities with populations of migrant workers.

Commerce Secretary Wilbur Ross acknowledged those concerns in a memo on Monday, but says he thinks they’re overblown and that there is too little evidence that asking about immigration would have a major impact on response rates. Either way, he wrote, better information about voters is worth the risk: “I find that the need for accurate citizenship data and the limited burden that the reinstatement of the citizenship question would impose outweigh fears about a potentially lower response rate.”

But Healey and attorneys general from at least a dozen states are calling bull.

“The Census is supposed to count everyone,” Healey wrote in a tweet. “This is a blatant and illegal attempt by the Trump Administration to undermine that goal. We will sue to ensure a fair and accurate Census that counts the people of Massachusetts.”

The Census is supposed to count everyone. This is a blatant and illegal attempt by the Trump Administration to undermine that goal. We will sue to ensure a fair and accurate Census that counts the people of Massachusetts.https://t.co/YRxnMxVAxB

At least a dozen states have said they will do the same.

“This is nothing but a blatant attempt by the Trump Administration to frighten minority groups away from being counted and to sabotage the 2020 Census,” Galvin said, according to the State House News Service. “The Constitution requires us to count every person living in the United States, not every citizen. This question is completely irrelevant to the process.”

In February, Boston Mayor Marty Walsh joined a group of more than 160 mayors who signed a letter urging the Trump administration not to include the citizenship question” which they said would threaten “the Census Bureau’s ability to conduct an inclusive enumeration that accurately reflects the diverse fabric of America.”