The person behind the wheel of the tractor-trailer that struck Bernard Lavins in Porter Square will not be charged. 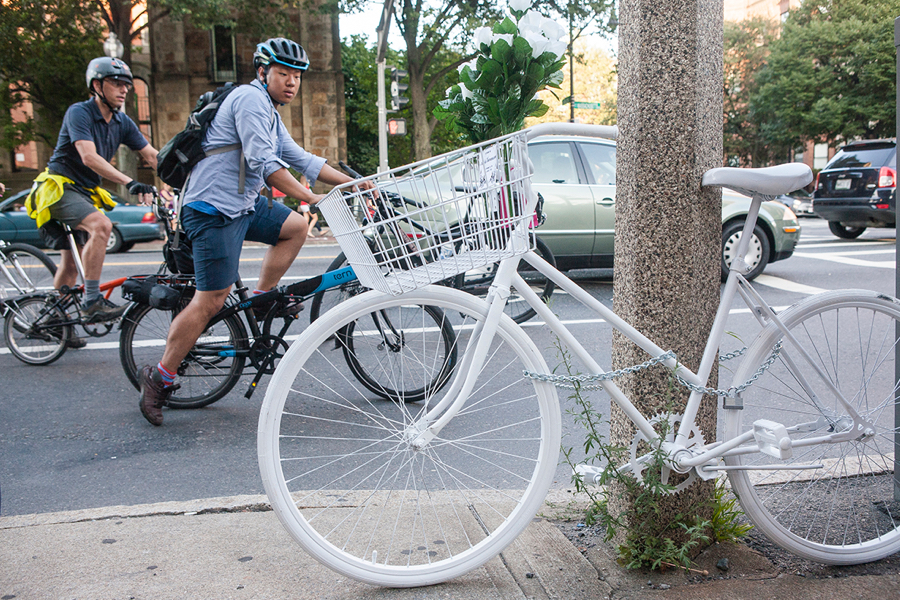 A truck driver will not be charged after a fatal collision that left a bicyclist dead in the fall of 2016.

On October 5, 2016, 60-year-old physician Bernard Lavins was killed in Cambridge’s Porter Square neighborhood during his bike ride to work. In the days after the incident, the Middlesex District Attorney’s office announced it would look into what happened, and almost a year and a half later, determined the driver of the commercial tractor trailer that collided with Lavins was not at fault. According to the DA’s office, the doctor, who was hit at the intersection of Mass. Ave. and Somerville Ave., veered into the middle lane of traffic ahead of the collision.

The report indicated that Lavins, who intended to turn left, did not signal as he exited the bike lane on Mass. Ave. 36 feet from the intersection. He ended up in the truck driver’s blind spot, making it “very likely that the driver of the truck could not perceive” him, per a statement from the Middlesex District Attorney’s office.

Investigators ruled out mechanical failure, roadway conditions, and roadway design as contributing factors to the collision. They also confirmed the truck driver was not speeding or driving while distracted during the crash. After the truck collided with him, Lavins was hit by a sedan; neither driver will face civil or criminal charges, according to the Boston Herald.

Becca Wolfson, the executive director of the Boston Cyclists Union, says these findings are indicative of a larger problem with roads and large commercial vehicles. Collisions don’t happen due to malice, Wolfson says, but that doesn’t mean responsible action cannot be taken to prevent future crashes.

“It’s a travesty for the family, for the bike community, and for safety in our streets that there isn’t more accountability for crashes, especially fatal crashes,” Wolfson says. “This is another demonstration the trucks shouldn’t be allowed on our streets unless they are equipped with the most stringent safety measures.”

Lavins is one of 33 cyclists who have been killed in Massachusetts since 2015, according to a January report from the advocacy group MassBike. Drivers have been convicted in two of the collisions, and in 28 of the crashes, no charges were brought at all.

Wolfson, who noted Lavins’ death came just four months after the cyclist Amanda Phillips was killed in Inman Square, called for an overhaul of vehicular safety standards, especially because trucks’ blindspots have repeatedly played a part in collisions. She also says more city resources need to be devoted to fixing dangerous intersections.

“[Lavins’ death] really solidified sadness and anger and questions of why changes on our streets aren’t happening at a pace nearly fast enough, especially in Cambridge, because we have the resources,” Wolfson says. “We have smart people who want to make changes, yet they’re still not happening at the right pace.”

Cambridge officials have made efforts in the past to improve cyclist safety, including a ban on left turns at the intersection where Phillips was killed. Joseph Barr, the director of traffic, parking, and transportation in Cambridge, says the city instituted “immediate” changes at the intersection of Mass. Ave. and Somerville Ave. within a month of Lavins’s death, including marking bike lanes more clearly. More substantial efforts are underway to make Porter Square safer, Barr says, though a complete redesign is not in the works. One option on the table is changing the traffic lights at the intersection so there’s “no time penalty” for bikers who use a separated, jug handle turn lane rather than riding in traffic. Barr says the updated lights could be implemented by the end of the spring.

This story was updated at 10:34 a.m. on April 4 with comments from Joseph Barr.