Should You Give Pot to Your Dog?

Boston veterinarians are asked every day about treatments like CBD. They're divided on how to answer. 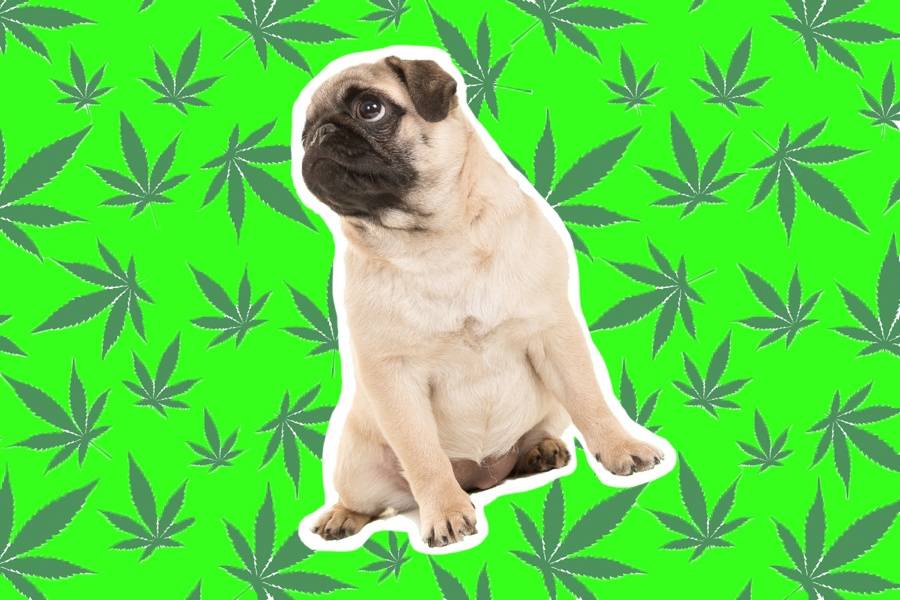 Hardly a shift passes when Dr. Lisa Moses isn’t asked whether it’s OK to give a pet marijuana. “It’s an unbelievably frequent question,” Moses says. “I talk to somebody at least once a day about it.”

A seasoned veterinarian, Moses leads the Pain and Palliative Care Service at the MSPCA-Angell Medical Center in Jamaica Plain, where she treats some of the region’s sickest pets, sometimes in their final days. Her patients arrive afflicted with muscle-scorching arthritis or suffering painful tumors, and their owners come to her wanting something, anything, to help make their four-legged companion comfortable. Moses will run through a litany of options, including prescription painkillers, massage therapy, and acupuncture. More and more, though, these conversations are turning toward the potential benefits of marijuana, and it’s a scientific and ethical gray area for vets across the country.

The phenomenon of pot-curious pet owners started about five years ago, Moses says, as interest in marijuana-based treatments for humans spilled over into the animal world. The focus tends to be on cannabidiol, or CBD, a cannabis compound that’s said to offer many of the therapeutic benefits of medical marijuana while containing negligible amounts of THC, the component of the drug that makes users feel high and can be dangerous to pets.

Nowadays CBD-laced pet products are all the rage. When her late bulldog Puddy was ill, model and social media celebrity Chrissy Teigen polled her Twitter followers for CBD recommendations and got more than a thousand replies. In her mentions, fans shared story after story about pot-for-dogs as a kind of miracle drug: It returned ailing pups to their former, fun-loving selves, they wrote. Some suggested she try products like Charlotte’s Web Paws, a “whole-plant hemp oil” for pets.

does anyone give their dog CBD oil? I know about the endless benefits for humans but not much about it for dogs. My old man bulldog puddy has cancer and heart issues 🙁 just want him to be happy and comfortable!

But are these products, which have burst into the mainstream, actually effective for pets?

It’s a tough question to answer, Moses says. Despite laws allowing the medical use of marijuana in dozens of states, it has never been legal to write a pot prescription for an animal. So Moses insists she can’t prescribe CBD to the pets she treats. She can’t even suggest the treatments, she says, because doing so could jeopardize her standing with the Board of Registration in Veterinary Medicine.

“Its status is all murky,” says John H. de Jong, a Boston-based vet and president-elect of the American Veterinary Medical Association. “It’s a complicated issue [and] it’s not recommended that we go out and recommend people purchase these options. We can say, ‘It’s up to you.’ But we have to be very careful because, God forbid, if something goes wrong, the veterinarian is liable.”

Legal concerns aside, the truth is research on CBD products in animals is scant. To date, there are no large-scale, peer-reviewed studies on the topic. That’s in part due to the DEA’s classification of cannabis and CBD as “Schedule 1” drugs (on par with heroin and LSD), which makes it exceedingly difficult to get that kind of research off the ground. De Jong says vets typically don’t recommend treatments for their patients until the treatment is backed by rigorous science. That could take years.

In the absence of science, the only evidence is anecdotal. Moses says she’s constantly hearing stories from her clients about how their ailing dogs and cats appeared rejuvenated after wolfing down a CBD snack or lapping up a squirt of hemp oil, but she takes these tales with a grain of salt. After all, she says, her human clients are vulnerable to what she calls the “owner placebo effect”—when someone loves their Chihuahua so much they trick themselves into thinking it’s feeling better, even if it isn’t. The only way to get an objective sense of a pet’s progress, she says, is for a trained expert to monitor it over an extended period and take diligent notes. Moses’ clients may simply want their dog or cat’s edible to work, so they believe that it does.

Not all vets are as reluctant as Moses, though. At the Back Bay Veterinary Clinic on Newbury Street, a line of hemp-derived oils and soft-chews for dogs is on display, alongside the nail clippers and specialty diet chow. “I thought that it’s something definitely worth investigating and offering out there to our clients,” says Dr. Pam Bendock, the clinic’s co-owner and lead veterinarian.

The products offered at Bendock’s offices are made by Maine-based ElleVet Sciences, whose formula last year underwent a small study with a researcher at Cornell University’s College of Veterinary Medicine. The double-blind clinical trial followed 16 dogs with osteoarthritis and found evidence that the ElleVet formula reduced pain and improved mobility in nearly all of them. “I was impressed by the process, the science behind it,” she says.

Bendock doesn’t believe what she’s doing is breaking the law or violating veterinary best practices. She is quick to note that the supplements she sells aren’t made with CBD oil; they’re made with hemp oil that contains CBD. Also, she isn’t writing a prescription for the products. They’re merely available over the counter, just like doggie breath mints and supposedly soothing lavender spritz.

“I feel like, if there are no known side effects, why not give it a shot?” Bendock says, noting that she tried dosing her own golden retriever, which suffers from elbow dysplasia, and saw the treatments improve her pup’s symptoms almost immediately. “Giving it a shot is not a guarantee that it’s going to make a difference, but in my experience it has.”

Whether vets embrace them or not, CBD products are easy to find on the shelves of specialty pet stores in Boston. Nancy Maida, co-owner of the Pawsh Dog Boutique on Gloucester Street, says she’s stocked them at her store for about four months. “It’s a fairly new product for us and it’s definitely becoming a trend,” Maida says. “We’ve had a lot of companies sending us samples.” A few blocks over, the Fish and Bone pet shop on Newbury Street has been stocking pot-laced biscuits and pill capsules for about year, says buyer Amy Ray. “We sell a lot of it around the Fourth of July when the fireworks are going,” she says, attributing the seasonal spike in sales to the treatments’ apparent effectiveness at calming nerves.

Back at her clinic in Jamaica Plain, though, Moses isn’t wavering. She’s waiting for the science to catch up, she says. “I believe that there are going to be ways that we find to safely and effectively use this as a palliative care drug and a pain drug,” she says. “But we are far from that.”

An earlier version of this story misstated John H. de Jong’s role at the American Veterinary Medical Association. He is president-elect, not president.